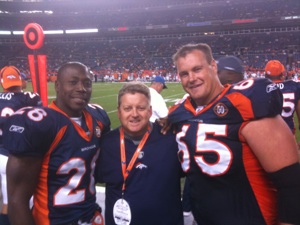 Dave Ellis is a Veteran Sports RD who logged 20 years in the collegiate ranks with Nebraska and Wisconsin athletics and the last ten working at all levels of sports including all levels of the professional ranks (NFL, MLB, NBA, NHL).  As a former strength coach (CSCS) and registered dietitian (Sports RD) Dave has a very grounded perspective on the challenges athletes face with the grind of sports.  You find Dave actively engaged in shaping opinions and policies that are focused on athlete welfare.

Sports RD Dave Ellis is one of the most compelling, if largely inconspicuous, stories in athletics.   No Sports RD in the world has worked with a more prestigious roster of athletes and championship teams, from gold medal-winning Olympians to Super Bowl champions; from Cy Young Award winners on the baseball diamond to playoff teams in the National Hockey League; from college football’s nationally ranked contenders to youth league and teenage athletes still learning the fundamentals of their sport, and of sports nutrition.

From his earliest days in the 1980s teaching alongside legendary coach Tom Osborne and the three-time national football champion Nebraska Cornhuskers, to the 2011 Super Bowl Champion Packers, Dave gravitates to “winning” like someone who has “success” baked into his DNA.   In the past year alone, he could have been found in the pits of the Daytona 500, court side in the NBA, rink side in the NHL, patrolling the sidelines of NFL and college football’s top teams, presenting his views to colleagues at an annual conference, speaking on Capital Hill or being quoted in the New York Times,Wall Street Journal or Consumer Reports.

Dave is a Registered Dietitian (RD) and Certified Strength and Conditioning Specialist (CSCS) who counsels athletic programs on nutrition and teaches athletes how to eat the right foods on a sensible schedule to fuel performance, prevent cramps, finish strong and recover rapidly.  He’s also revered by many of the top athletic programs in the country, notably in college football, for his specialization in training table design, body composition and frame assessment.  With every passing NFL draft that takes place in the spring, a group of young men enter into the professional ranks having been mentored by Dave, or by one of the health professionals Dave recruited and trained with his “Food First” Fueling Tactics® system.