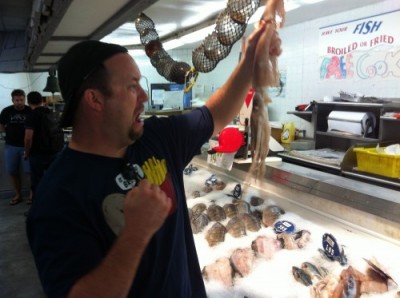 Chef Plum was born in Richmond Virginia is a graduate from the prestigious Culinary Institute of America and has over 18 years of experience.

He has worked all over the east coast in five star hotels and resorts to great small neighborhood restaurants. Plum-Luv-Foods was born in 2006 and since then has brought great whole farm foods to families, small parties, Broadway actors, executives, Food Network and even primetime network TV (ABC).

Recently Chef Plum was the winner of Episode 2 of “Guys Grocery Games” on the Food Network.

Chef Plum has a passion for simple easy farm foods believing great food doesn’t need gimmicks. His latest brainchild, Dinner Underground has
brought a series of pop up restaurants to Newtown and Danbury. Chef Plum is the first chef to ever host a pop up restaurant inside the walls of mall kitchen
giant Williams-Sonoma.