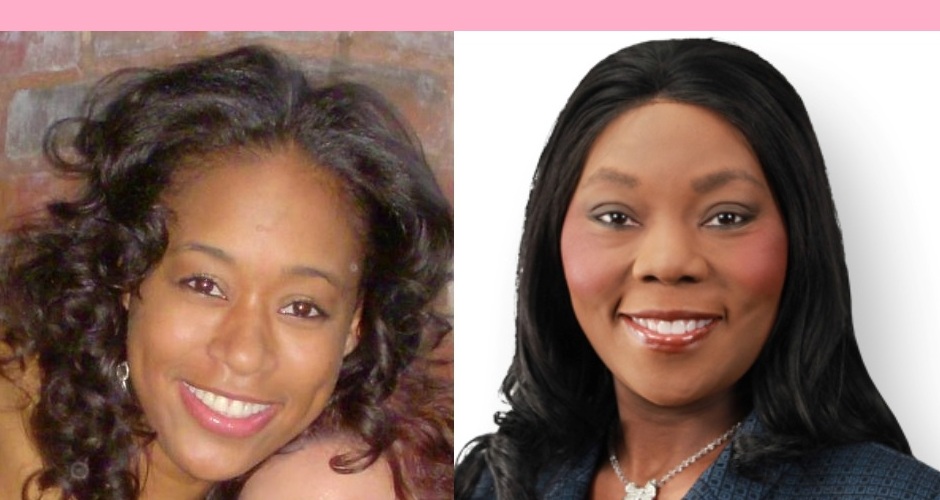 NFL veterans Chris Draft and Levon Kirkland have a lot in common.  Both men spent more than a decade in the League.  Both played linebacker.  Both married beautiful, intelligent, vivacious women named Keasha.  And both recently lost their wives to lung cancer.

Today, Off The Field and Team Draft—a lung cancer awareness initiative launched by Chris and Keasha Draft during Keasha’s year-long battle with the disease—are working together to raise lung cancer awareness through the Winter White portion of the show, during which all of the member models will be styled from head to toe in white, the traditional lung cancer awareness color.  Winter White is dedicated to the survivors, caregivers and healthcare providers who are battling this disease every day, and to the memories of these two strong women.  Here are their stories.

Born and raised in Greenville, South Carolina, Keasha Draft attended Clemson University (Levon Kirkland’s alma mater) where she was a member of the Rally Cat’s dance squad before graduating with a degree in Electrical Engineering.  After graduation, Keasha worked as an engineer while dancing for the NBA’s Charlotte Hornets before working in the pharmaceutical industry.

She was an energetic, vibrant young woman who had never smoked when she was diagnosed with Stage IV Lung Cancer in December 2010.  At the time, her only “symptom” was a slight shortness of breath a few days earlier.  Despite the diagnosis and knowing the long odds they faced, Keasha and Chris decided to fight back.  On November 27, 2011, standing side-by-side, they launched Team Draft at their wedding.  One month later, Keasha lost her courageous fight and died at the age of 38.

With a resume that included a list of accomplishments and accolades in everything from academics and athletics to modeling and medicine, Keisha Kirkland was a true renaissance woman.  A native of Danville, Kentucky, Keisha attended the University of Louisville before going on to complete chiropractic school at Life University, graduating with honors.  Always looking for new challenges, Keisha eventually became the Whether Anchor for WYFF Channel 4, an NBC affiliate in Greenville, South Carolina (Keasha Draft’s hometown).  Like Keasha Draft, Keisha Kirkland was a healthy non-smoker when she was diagnosed with Stage III Lung Cancer in 2008 after her doctors noticed a mass in her right lung during a routine heart scan.

Even while enduring months of surgery, radiation and chemotherapy Keisha inspired others by continuing to forecast the weather for WYFF and speaking to churches and support groups.  In 2012, Keisha shared her story with the entire country when Team Draft arranged for her to be among those survivors featured during a first-of-its kind CNN special about lung cancer and Team Draft’s efforts to change the face of the disease.  In October of last year, Keisha passed away at the age of 41 after battling the disease for 5 years.

Team Draft is dedicated to raising lung cancer awareness and increasing badly needed research funding by shattering the misconception that lung cancer is a “smoker’s disease.”  The fact is anybody can get lung cancer.  Yet, despite the fact that between 20,000 and 30,000 people who have never smoked—including Keasha Draft and Keisha Kirkland—are diagnosed with lung cancer in the United States each year, the smoking stigma negatively impacts lung cancer research funding, which pales in comparison to funding for other major cancers and diseases.

Team Draft is out to change all that by using the unique platform available to Chris as a former NFL player and nationally recognized community leader and health advocate to lead a National Campaign to Change the Face of Lung Cancer—a campaign that has taken the organization to more than 90 of the top cancer treatment and research centers in North America.  To learn more about Team Draft and the National Campaign and to hear the stories of many of the survivors and healthcare provides they have met along the way, please visit www.teamdraft.org.

The Facts About Lung Cancer

For decades, the facts about lung cancer have been sobering:

But, now there is HOPE!  Team Draft’s National Campaign to Change the Face of Lung Cancer gives the organization a front line view of the state of lung cancer in North America.  As they have learned, this is an exciting period in the history of the care and treatment of the disease:

While these revolutionary procedures are starting to yield results[7], the key to making even greater strides is funding.  Funding for lung cancer research is, however, impacted by the “smoker’s disease” stigma.[8] That is why Team Draft is campaigning to change the face of the disease.  Together, we can tackle lung cancer!