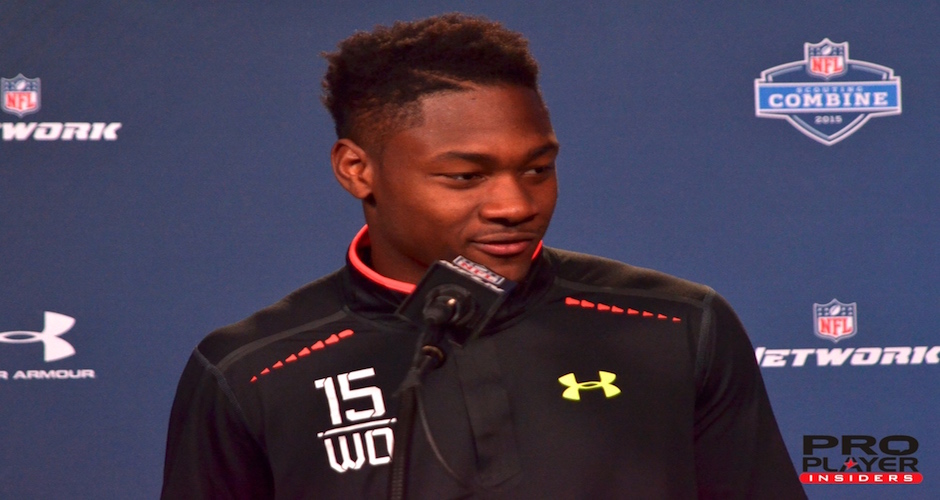 Stefon Diggs entered the University of Maryland as a five-star recruit out of Good Counsel High School in Olney, Maryland. Diggs exploded on to the scene as a freshman producing multiple highlights while posting 848 yards and six touchdowns on 54 receptions. Diggs also added 114 yards on 20 carries in his freshman

season. Unfortunately Diggs’ injuries and a dearth of talent surrounding him stifled his production the remainder of his time as a Terrapin.

Diggs suffered a fractured fibula in his sophomore season, which limited him to just 587 yards and three touchdowns on 34 receptions. In his final season at Maryland, he suffered a lacerated kidney against Penn State. After suffering the injury, Diggs played the remainder of the game but missed the final three contests against Michigan State, Michigan and Rutgers.

Diggs reasserted himself as one of the more talented wide receivers in college football when he returned to action against Stanford in the Foster Farms Bowl. Diggs had his most productive game of the season as he accumulated 138 yards on 10 receptions. Diggs subsequently declared for the NFL draft, and is now widely regarded as a third or fourth-round pick because of his lack of production and injury history. Conversely Diggs is a first-round talent based on sheer skill and athleticism.

Diggs spoke about his medical evaluation at the NFL Scouting Combine. “Medicals went well,” Diggs said. “They were aware of the couple injuries I did have. I had one x-ray on hips, but other than that, nothing came out. … I’m now 100 percent [healthy]. “

Diggs feels that the injuries he endured through the course of his college career are a mere aberration as opposed to an inability to remain healthy. Diggs also said that he has learned from his injuries. “I play a lot smarter now,” Diggs said. “Stanford game I played a lot smarter, It’s all about playing hard and smart at the same time. But when I lay it all on the line for my team, I don’t feel bad about it at all.”

When asked about his draft stock, Diggs said,

“I work hard. I bring my lunch pail and go to work everyday just like everybody else and I feel like I put in the time. … I’m not going to sell myself short and say I’m not the best receiver in this class.”

Diggs classifies himself as a receiver but he also knows he’s an exceptional playmaker with a unique skillset. Diggs played running back on occasion during his time at Good Counsel High School and hopes to contribute at that capacity at times in the NFL. “I can take handoffs, I can get you a solid four yards as a running back,” Diggs said. “I can line up behind a fullback and get handoffs like anybody else. I can play running back and I can play receiver. I can line up anywhere across the board and I know I can”

Due to an injury plagued collegiate career, and Maryland’s inability to surround Diggs with more talent (namely a quarterback), an NFL team is going to significantly improve their wide receiver corps by selecting him later than his talent suggest he should be taken.

Diggs presents tremendous versatility, and there are three teams that have expressed a great deal of interest in the six-foot, 195-pound wide receiver with 10-inch hands. Diggs has met with the Washington Redskins and the Baltimore Ravens. He has also met with the Cleveland Browns twice.

Many receivers are currently rated ahead of Diggs, but if he is able to remain healthy, expect him to emerge as one of the NFL’s best rookie wide receivers during the 2015 season.