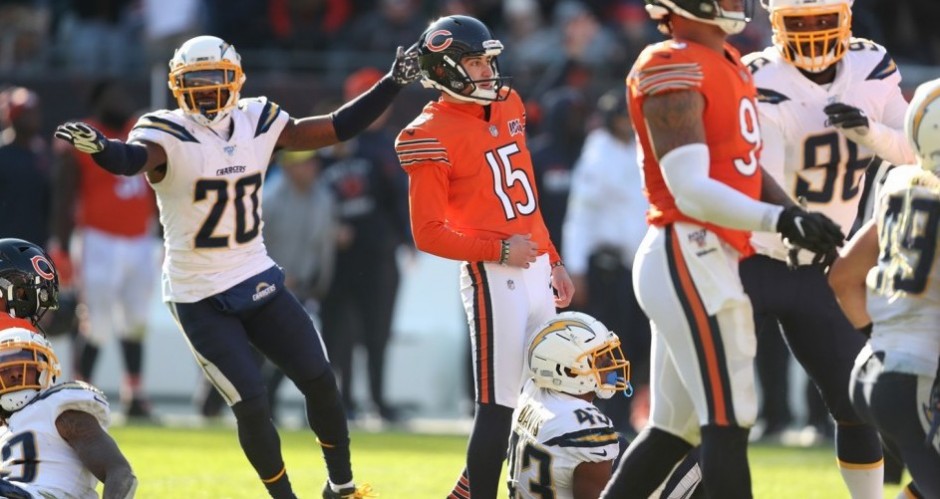 Four punts, one interception, and a 19-yard touchdown run by the Artist Formerly Known As ‘Pro Bowl Running Back’, Melvin Gordon. Safe to say, it was an inauspicious start to the game for the Chargers offense on Sunday. The second half was not much prettier, as Los Angeles would only account for 237 total yards of offense in the game, their lowest output of the season thus far. But when it was all said and done, and Chicago kicker Eddy Pineiro’s game-winning attempt sailed just left of the upright, the Chargers would escape the Windy City with a 17-16 victory over the Bears.
While there was very little to be enthralled about offensively, the Chargers did show flashes of what they can be when everyone is healthy. Melvin Gordon, still trying to shake the rust off, did show glimpses of his old self – cutting the ball back, bursting through a seam and refusing to be denied at the goal line. While the running back did only account for 31 yards on 8 carries – largely in part to the running game being abandoned and the Chargers inability to get any sort of momentum going on the offensive side of the ball – he did have a spring in his step that was very reminiscent of the Melvin Gordon from years past. Undoubtedly, this comes as great news to Chargers fans as the next three games are against teams who have struggled against the run all season.
Despite only throwing for 201 total yards on 19 of 29 passing, Philip Rivers again proved himself to still be capable of accurately distributing the football to his triad of weapons. Receivers, Mike Williams and Keenan Allen, combined for 122 yards on 10 catches, while tight end, Hunter Henry, caught four balls for 47 yards. So far this season, however, the Chargers have been unable to get the run game and the passing game going in the same game. Moving forward – and perhaps with Gordon finally (hopefully) in midseason form – it will be interesting to see how run-heavy or pass-heavy the Chargers choose to go with their playcalling.
In a game where their offense struggled to put points on the board, the Chargers needed their defense to show up. Bears running back, David Montgomery, rushed for 135 yards on 27 attempts. The rookie running back out of Iowa State also punched it into the end zone with a four-yard run in the 3rd quarter. Gashed on the ground by Montgomery, and picked apart through the air by Mitchell Trubisky (23/35, 253 yards), the Chargers defense did just enough (3 sacks, 1 int) to keep the Bears out of the end zone and force three Pineiro field goals. Pineiro’s final attempt of the game, a 41-yarder, hooked wide left as time expired.
Next Sunday, the Chargers will attempt to cool off Aaron Rodgers and the surging Packers (7-1). Rodgers has nine touchdown passes in his last two games, and the Packers are fresh off impressive victories over the Cowboys, Lions, and Chiefs. The Aaron Rodgers-Aaron Jones duo figures to be the most dynamic quarterback-running back tandem the Chargers have faced so far this season and it will take a valiant performance on both sides of the ball from the Chargers to avoid falling to 3-6 on the year.