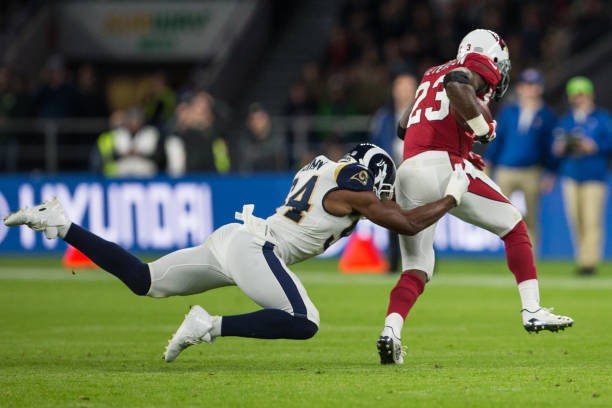 The Arizona Cardinals will be back home in week 13 for their second of three straight home games to take on the division rival, Los Angeles Rams.  In a war that began back on October 3rd, 1937 between the Cleveland Rams and the Chicago Cardinals, the Rams and Cardinals have battled in 79 regular season games against each other.  With the Rams leading the series 39-38-2, it couldn’t be much closer.

For L.A., not much has changed since the week seven beatdown (33-0) they laid on Arizona in London, England.  In fact, the 8-3 Rams have done nothing but remain consistent.  Consistently, good.  They still have a top 10 passer in Jared Goff, and a top five running back in Todd Gurley III.  Headed in to the week seven matchup against Arizona, Los Angeles was averaging 29.8 points/game and giving up 20.83 points/game.  In the past five weeks they have scored 30 points/game and only given up 13.6 points/game.  Only the 10-1 Eagles have scored more points per game on the year.  To put it bluntly, these aren’t Jeff Fisher’s 8-8 (or worse) Rams.  These are Sean McVay’s Rams.  McVay was hired as the youngest coach in NFL history at only 30 years old (currently 31) and he brings with him one of the NFL’s youngest teams.  Thanks to Cleveland’s “ability” to earn a multitude of first round picks, only the Browns are younger.

Since what appeared to be the worst case of jet lag ever in London, not much has changed for Arizona either.  What has changed is the quarterback…twice.  Blaine Gabbert will be the third Cardinals quarterback the Rams face this year.  He may not show up on SportsCenter every Sunday, but Gabbert has played well enough to at least be in the discussion as a bridge quarterback in 2018.  He did just lead Arizona to a victory at home against one of the league’s best teams, the Jacksonville Jaguars.  While he made a few costly mistakes, for the most part Blaine has shown poise in the pocket, especially in instances like when he narrowly evaded former Cardinal, Calais Campbell, and hit received Jaron Brown for a 52 yards touchdown.

If the old Cardinals hope to beat one of the new young alphas of the NFC, they will need to keep Goff and Gurley III off the field.  To do this Arizona will need to attack the one “weakness” the Rams have; stopping the run.   By riding the coat tails of running backs Adrian Peterson and Arizona State alum, D.J. Foster the Cards can control the clock and open up the play action pass for Gabbert to align with head coach Bruce Arians philosophy, “no risk-it, no bisquit”.  Foster has only one carry on the year but with backup running back Kerwynn Williams out with a rib injury and AP being a little banged up, Foster can expect to get an increased workload.  Helping keep Goff and Co. off the field will be superstar defensive end, Chandler Jones.  Due to the Cardinals 5-6 record, he may not be among the defensive MVP chatter, but he very well should be.  Jones leads the league in tackles for loss (20) and is tied for second in sacks (12).  Unfortunately he may not have the help of $LB, Deone Bucannon.  Prognosis on Bucannon wasn’t as bad as it could have been early in the week, but Deone is currently day-to-day and is questionable to play because of an ankle injury that has seemingly lasted forever.

Arizona is seven point underdogs at home, but the Cardiac Cards seem to always make it much closer than it should be, even when they are favored.  Should the defense and special teams deliver more big plays like the ones last week from Tyrann Mathieu (DB) and Phil Dawson (K), it won’t be as easy for the Rams to come out with a win in week 13.  With a win Arizona would get to 6-6 and the head to head regular season series against the Rams would be evened up at 39-39-2.  Now there is certainly nothing to brag about at the moment, but crawling out of the losers circle both presently and historically is a start.  Here’s to .500!