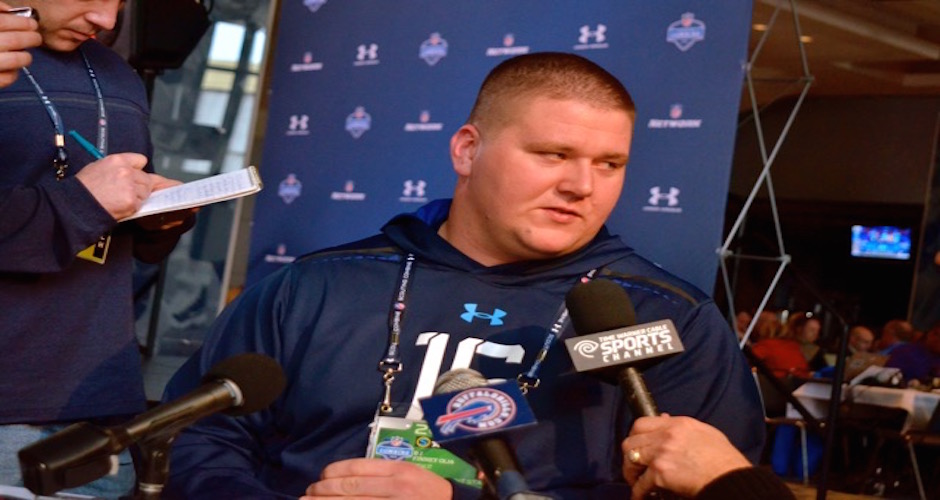 B.J. Finney played his high school football in Andale, Kansas and was rated a two-star offensive lineman by Rivals.com. After leading his team to a section runner-up finish in 2009, Finney found himself without any scholarship offers to play football at the collegiate level. To this very day, Finney still does not know what caused him fall through the proverbial cracks of the recruiting process.

When asked why he was over looked as a high school player Finney said,

“I don’t know, I really can’t answer that. All I know is there was a plan and I just had to take the action and get where I needed to go.”

In his final season at Kansas State, Finney became the first offensive lineman in school history, and the fifth player overall to be named a team captain three times. Finney started 52 games during his career as a Wildcat. Finney deems his in-game experience and will to improve extremely important to his progression as a player.

“If you get satisfied, you actually get worse, you don’t improve. A player never stays the same. Coach Snyder [Kansas State head coach] always said, ‘Don’t take things for granted, and if you take a performance for granted then obviously you aren’t going to be here.’”

Finney went on to credit Snyder for his evolution from college walk-on to NFL prospect when he said,

“I can’t imagine anyone that would’ve pushed me harder and expected more out of me in a college program.”

Finney is very nearing his dream to play at the NFL level. His ability to maintain consistency with his technique and not get flustered or overly emotional during the course of the game is well documented. His movement skills at 6-foot-4, 303 pounds, and his ability to play center, guard and tackle have also piqued the interest of NFL scouts. However, there are areas of Finney’s game he would like to improve upon prior to entering the NFL. Finney said,

“I need to improve on moving my feet in the second half when I get tired. I have to move my feet, but as a [former] wrestler, I tend to try and lock up and outmuscle people.”

While his wrestling background helped promote a flaw in his game, he also credits wrestling for helping him with other aspects of his technique.

“It helped me manipulate different positions of defensive linemen using their momentum to my advantage, especially in pass protection. Being able to get their hands off of me and not be moved too much. “

Finney has come a long way from being an offensive lineman that no one offered a scholarship out of high school. Not only did Finney become a scholarship athlete at Kansas State, he became an integral part of one of the better football teams in Division-I.

While the financial stress of his mother paying for his college education motivated the young center prior to becoming a scholarship football player at Kansas State, it is clear what drives him now. Finney is merely looking to prove that he’s every bit as talented as those that were once believed to be superior to him. Finney said,

“I belong in this game, I belong at this level and I can compete with anybody”

If history is the best predictor of future behavior, one can only surmise that Finney certainly belongs and will have a long, productive career in the NFL.