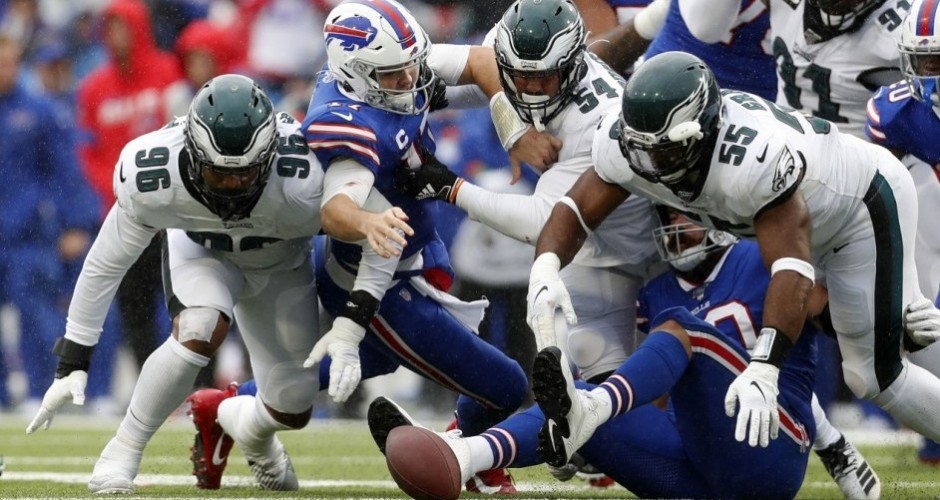 Defense may win championships, but it’s a difficult task to ask them to carry you to victory for 16 regular-season games. On a rainy and windy day, Buffalo’s defense was unable to do so, and the Eagles will fly home with a 31-13 road victory.

The first quarter would be fairly quiet. Philly would strike first with a field goal, and it would be the only points of the quarter. On a 10-play drive that started in the first quarter, Buffalo would find the endzone in the first few seconds of the second quarter when Josh Allen connected with Cole Beasley for a 14-yard touchdown. Bills would lead, 7-3.

In a critical turning point, Allen would fumble late in the second quarter deep in his own territory, and the Eagles would recover. It would be Allen’s second fumble of the game, his seventh of the season, and the green team would take the ball 24 yards in five plays for a score, leaving just 25 seconds left in the half. Instead of kicking into the wind, the Eagles decided to go for two, and would succeed. 11-7, Eagles.

After a good return by Andre Roberts, a deep out to John Brown, and a 14-yard scramble by Allen, Buffalo found themselves in field goal range with just a few seconds left in the second quarter. However, the wind had other plans and Steven Hauschka’s field goal would carry wide right as the half expired.

In Philly’s second play of the new half, rookie running back, Miles Sanders, would gallop 65 yards to the house. The Eagles would miss the extra point and the score would be 17-7, Philly.

Just when it felt like all the air had been sucked out of the Bills Mafia, Allen would answer. Buffalo would go on a 10 play, 75-yard drive that would be capped off with a 28-yard catch and run by rookie running back, Devin Singletary. Unfortunately for Buffalo, their scoring would end there, and Philly would run away with it – literally. On their following drive, Wentz and the Eagles offense would answer with a four-yard touchdown run from running back, Boston Scott.

When it was all said and done, the backfield of brotherly love would carry the ball a whopping 41 times for 218 yards and three touchdowns – Wentz would have eight of those carries for 35 yards. A run game like that will prevent any opposing offense from gaining momentum, while also wearing down a defense. The Bills would finish the game with just 253 total yards (98 rushing, 155 passing).

Buffalo will be back home next week to take on the Washington Redskins in a game that isn’t just a should-win, but a must-win.