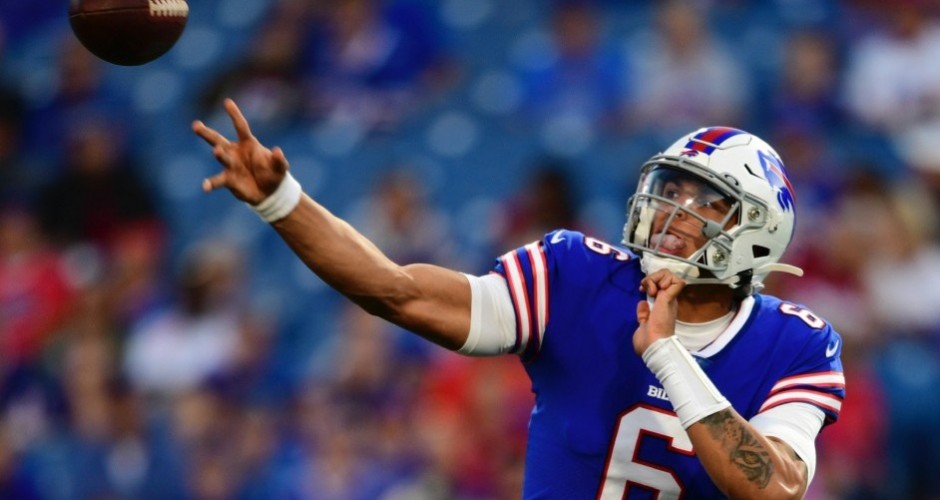 Preseason records don’t matter, but for players trying to make a 53-man roster, individual performances do. Buffalo Bills rookie, Tyree Jackson, is one of those players. Outside of training camp, Jackson hasn’t had much opportunity to showcase his talents. Headed into the final week of the preseason against the Vikings, the 6’7” undrafted free agent had only completed six passes total in limited work against the Panthers and Lions. Tonight, he’d get his chance. Should Jackson’s opportunity come to an end in the next couple of days, his last time wearing a Bills uniform would be bittersweet. Tyree played college ball at the University of Buffalo, less than 20 miles away from his current home at New Era Field. Tonight, it would be more than just a home game. More than just another preseason game.

The athletic quarterback may run a 4.57 40-yard dash, but tonight would start off anything but fast. In fact, the first 56 minutes would be slow for the Bills offense. Very slow. In their first drive, Buffalo would handoff three straight times to running back, Marcus Murphy, and be forced to punt. The next drive would start off the exact opposite. Jackson would throw five straight passes and extend the drive for 10 plays, capping it off with 54-yard field goal from Steven Hauschka with just over a minute to play in the first quarter. Buffalo’s next two drives would again result in three-and-outs and the half would end. 10-3, Vikings.

Coming out of the locker room, Jackson and company would find some rhythm and go on a 12-play, 40-yard drive that would end with another 54-yard field goal – this time booted by Chase McLaughlin. The rhythm would be short lived. Buffalo would go three-and-out on their next drive and would follow that up with a turnover when Karter Schultz sacked Jackson for a nine-yard loss, forcing a fumble. In that span, the Vikings would add to the scoreboard, increasing their lead to 23-6.

Just when it looked like Buffalo wouldn’t be hitting pay dirt this evening, Jackson would take the Bills on a 12-play, 75-yard drive, ending with the young quarterback rushing for a six-yard touchdown. 23-13, Vikings.

On the following drive, the Vikings would have the ball for only 32 seconds before being forced to punt. Marcus Murphy would return that punt 79 yards for a touchdown and suddenly it was a game. 23-20, Vikings.

The Vikings would be forced to punt again, going three-and-out on their next drive. With momentum on their side, Buffalo would take over on their own 43-yard line with just one-minute left on the game clock. After a 15-yard scramble and a 30-yard pass to Nick Easley, suddenly the Bills found themselves on the Vikings 12-yard line. Three plays later, Jackson would find David Sills for an eight-yard touchdown with only eight seconds left on the clock. The Bills sideline erupted as if they just won a postseason game – a testament to how much this team truly cares about each other. Buffalo wins, 27-23.

After the game, head coach, Sean McDermott, would address the media.

Q: “With Tyree it may not always look pretty, but the kid’s a gamer, isn’t he?”

McDermott: “Ya, you know, you feel great for Tyree you know. UB product and able to be here, basically on his home turf and lead us to a come from behind victory, and just excited for him. Excited for all those young guys that were out there.”

Q: “Do you feel like maybe your decisions this year are more difficult than they’ve been in the last couple years?”

McDermott and his coaching staff will certainly have some tough choices to make. Were Jackson’s late game heroics enough for Buffalo to keep three active quarterbacks? Did fan favorite and former rugby star, Christian Wade, turn enough heads when his first NFL carry went for a 65-yard touchdown? The deadline for NFL teams to cut their rosters down to 53 players is Saturday, Aug. 31 at 4 p.m. ET., so we will know soon enough.