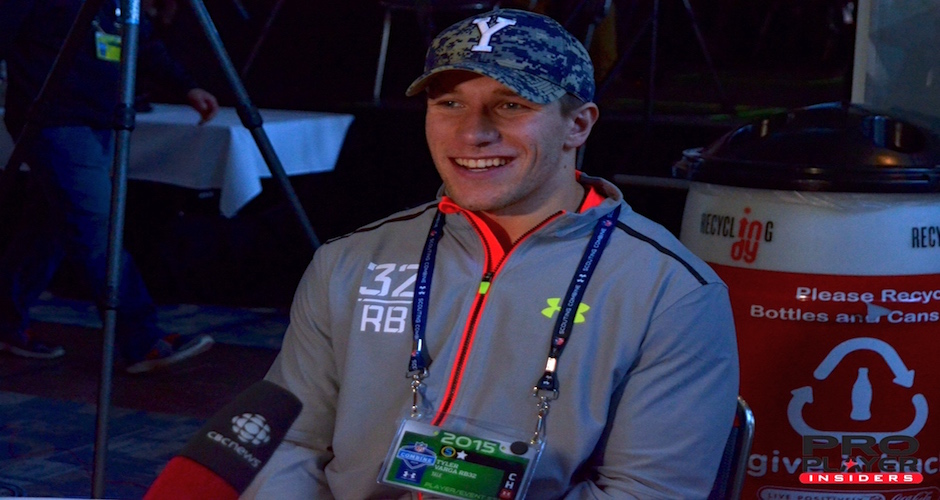 INDIANAPOLIS — Tyler Varga was born in Stockholm Sweden but was raised in Kitchner, Ontario where his football journey began. Varga played a host of other sports, but his love for football became evident as he began holding a football at the age of three.

Varga played his high school football at Cameron Heights in Kitchener, Ontario but in his final high school game, his football career nearly came to an end. Varga suffered a compartment syndrome injury to his lower leg, which prompted doctors to tell him that his playing days were over.

Though he was told he would never play football again, Varga never doubted he’d return to the gridiron. He attacked his rehab with boundless energy and subsequently had a stellar freshman year at the University of Western Ontario.

Prior to making the decision to play a season at the University of Western Ontario, Harvard was recruiting Varga. Once Anthony Reno left Harvard to become the head coach at Yale, he once again reached out to Varga to extend an offer to attend Yale. Varga committed to Yale and entered the university as a Pre-Med/Ecology and Evolutionary Biology major.

Varga finished his three seasons at Yale with 2,985 yards and 31 touchdowns on 529 carries. He also added 31 receptions for 240 yards and five touchdowns. Varga clearly feels he made the right decision to attend Yale. Varga said,

“It’s been the best decision of my life to go there. It’s been such a great experience being at Yale and rubbing elbows with some amazing people, amazing coaching staff. Coach Reno has done a fantastic job turning around the program and my teammates are amazing there. I feel like the luckiest guy ever. The family that I’ve been inducted into is just incredible.”

Varga continued to showcase his ability at the Reece’s Senior Bowl in Mobile, Alabama where he exceled as a runner, blocker and pass-catcher. Varga’s versatility transcends labels and he’s hoping to prove that to NFL decision makers with every opportunity. Unfortunately, Varga will not be running the 40-yard dash at the NFL Scouting Combine due to discomfort caused by an ankle impingement.

Varga will be participating in the bench press where he hopes to achieve 30 reps of 225 pounds. Varga will run the 40-yard dash at his pro day and believes his track and field background will enable him to run faster than the “experts” project him to run.

Varga has the ambition to further his football career, but he would like to use his platform as an NFL player to help as many people as he can. “I think that whenever you’re put in the spotlight people look up to you,” Varga said. “After my career is done, I want to be able to look back and say I touched as many people as I could and I used the spotlight to positively influence as many people as I can. I try to do that already. Obviously being a college athlete kids look up to you. I try to give back to the community a little bit running camps trying to grow the game of football.

Varga’s ability on the football field combined with his intelligence and altruism will ensure he has not only a successful career, but also a fruitful, exultant and prosperous life.

In the video below, Varga speaks about his versatility and how NFL coaches view him.