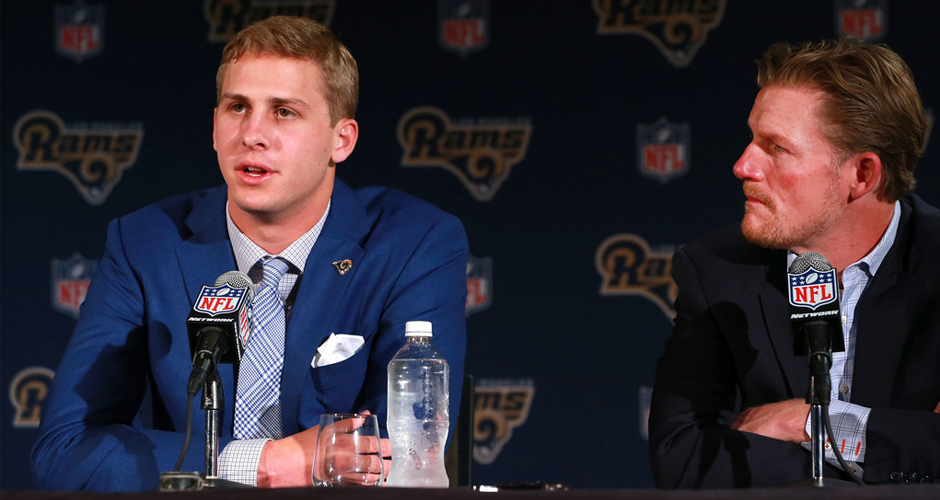 The Rams are returning to the City of Angels with a new set of talented and eager rookies. Jared Goff, a QB from Cal was the first overall pick. In round 4 the Rams picked up Tyler Higbee, a TE from Western Kentucky, and Pharoh Cooper a WR from South Carolina. Temarrick Hemingway a TE from South Carolina State, Michael Thomas a WR from Southern Mississippi and Josh Forrest a ILB from Kentucky made up the picks for round 6.

The team gave up 6 premium picks going into draft. Their second and third round picks went to the Tennessee Titans giving them the first overall pick in the NFL Draft.

The Rams needed a quarterback and they had their eyes set on Jared Goff. He’s a west coast kid and the best pure passer in the draft this season. His 2015 season at California yielded 4,719 passing yards, 43 TD’s, 13 interceptions and three 2-pt conversions.

While Goff isn’t much of a running quarterback, with good protection he can get the ball off to any receiver with the slightest opening. He has the ability to throw into tight spots that other quarterbacks wouldn’t imagine throwing.

His ball placement puts him on par with some of the more experienced QBs, which can benefit him and the team in the long run.

The last Cal quarterback to land in the first round pick was Aaron Rodgers in 2005.

There is a young Payton Manning in Goff and with time he can work up to an amazing QB with skills that may surpass either of the Manning brothers. Payton Manning’s 1997 season at the University of Tennessee yielded 36 TD’s, 3,819 passing yards and 11 interceptions.

With Goff on board, the Rams now have 4 quarterbacks on the roster, but one has to go by the start of the season. In 2015 they traded for, and signed Nick Foles, the person they hoped would be their franchise signal-caller. As the starting QB, Foles never showed up to lead the team in a real way. He finished the season with 7 passing TDs, 1 rushing TD, 10 interceptions and 2,052 passing yards. The Rams trailed the Seahawks and the Cardinals in the NFC West by the end of the season and finished a lackluster 7-9.

Foles seems to be the likely one to go. The Rams were hoping to trade him before the end of draft weekend.

The Rams lost two key defensive players Jenoris Jenkins and Rodney McLeod to free agency. Forrest was the single defensive player drafted and can’t make up for the loss of Jenkins and McLeod. Although Forrest is a rookie, Robert Quinn and Aaron Donald can gain support from him.

Running back Todd Gurley will have some much needed help from Higbee and Hemingway. Both TEs aid can take the pressure off of Gurley.

WRs Cooper and Thomas may see the field due to Stedman Bailey’s injury back in November. Stedman was shot twice in the head on November 24 and recently posted a video of him running drills. He is still going through protocol to see if he can return to the field.

The last time the Rams saw the playoffs was 2004. They haven’t finished .500 since 2003. Hopefully Goff and the new offensive personnel can help deliver a championship as the Rams move back to their former Los Angeles home.