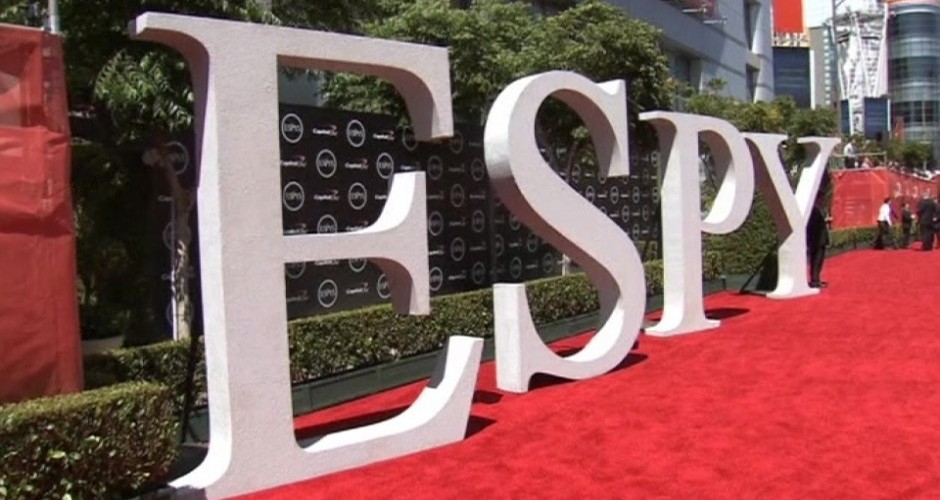 It has been another eventful year in sports (and it’s only July) and once again the ESPYs have given the viewing public the pleasure of witnessing this wonderful event. While there were winners, losers and a handful of memorable moments, some athletes stole the show on the red carpet before they even reached the front door. Here is a list of the top 8 best-dressed athletes at the ESPYs:

8. Floyd “Money” Mayweather. Mayweather sported the increasingly popular burgundy coat that is all the rage among celebrities and the trendy. Mayweather seems to have taken a cue from other famous celebrities that have donned the burgundy blazer before him.

Following in the footsteps of such notably best dressed actors as Leonardo DiCaprio and Robert Downey Jr., Mayweather still holds his own but brings nothing new to the table. But he sure does live up to his nickname; because there is no way that jacket was anything but expensive.

ESPYs, but after seeing Liukin’s outfit I’m sure I’ll never forget her. Liukin, a retired Russian-American gymnast, is best known for winning Olympic gold in the women’s individual all-around in Beijing.

More recently she graced the human race with her presence at the ESPYs wearing a beautiful white top/leather skirt combo that made a perfect blend of casual style with refined elegance. Not to mention she brought it home with the perfect accessory, her clutch, which only brings out her nuances of casual elegance further.

6. Lolo Jones. Jones is the type of girl you would want to bring home to your mother and your mother would tell her that she’s too good for you. Jones proves her right, being among only a handful of athletes who have participated in both the Summer and Winter Olympics, in track and field as well as bobsledding respectfully.

While you may not agree with your mother, what you can’t deny is how Jones shined through in her scarlet dress. Cut into two pieces, the top half reveals her abs and the small of her back while the lower half is cut exotically on the side that opens up to one of her legs and gorgeous high heels. While the dress does convey a sense of reserved comfort, it also compliments her toned body and proves that fit is sexy.

5. Hope Solo. The American soccer goalkeeping phenomena that is Hope Solo keeps blowing us allaway not only with her impressive career shutout record, but also with her sense of fashion and style. Solo wore a tight fitting dress with a stylish black and white pallet design.

Combined with her open toed heels and clutch in hand, Solo is a beaming example of what it mean to dress as a beautiful young woman. As much as we’d all like to imagine that Solo is constantly moving in slow motion, her fast paced sense of chic and flair are anything but.

4. Kevin Durant. The Durantula has been having a pretty good year! Though he and the Oklahoma City Thunder weren’t able to win the NBA Championship, losing to the San Antonito Spurs in the 2014 NBA playoffs semi-finals, he still seems to be rolling in the awards. First he was named the NBA’s coveted title of MVP and at the ESPYs won the Male Athlete of the Year award, dethroning King James (Lebron) who previously held both titles last year. Later on at the ESPYs, he was also named Best NBA Player.

Unfortunately Durant failed to top the Best Dressed Athlete at the ESPYs list, but I doubt that’ll shake his confidence. Durant places number four on the list for sporting a daring emerald tuxedo jacket. In the case most athlete’s fashion choices, they are more loud and obnoxious than not, but Durant earns respect for how he wore this jacket.

Choosing to go with a singularly colored article of clothing that accented the rest of his dapper outfit shows that Durant understands that one can wear an unconventional color as long it doesn’t overpower the rest of your outfit. This is a prime example of how you should wear a jacket and not let the jacket wear you.

3. Amy Purdy. Is there anything Amy Purdy can’t do? With a resume that looks more like a pamphlet in a

career advisor’s office, Purdy’s done everything from Dancing with the Stars to professional motivational speaking. Most notably, she’s known for shredding powder and took home the Bronze Medal for snowboarding in the 2014 Paralympics.

Purdy continues to shatter expectations by wearing a gorgeous, flowing dress to the ESPYs that had all the glimmer of a starlit night. The dress cut up on one side and revealed her leg attached to her prosthetic, which she confidently displayed while she showed off her sandals. Keep doing what you’re doing Amy, the rest of us will catch up sometime.

2. Maria Sharapova. Aside from making Floyd Mayweather look as small as Kevin Hart, the blonde bomber had other memorable moments at the ESPYs that didn’t have to do with size comparison. Sharapova’s stunning black dress was the subject of talk among many of the reporters and journalists attending the ESPYs.

The frilled skirt and lace sleeves resonated with Sharapova’s previous wardrobe accomplishments. But the added factor that she’s always so poised in heels yet so nonchalant in the way she carries herself bolsters the fact Sharapova recognizes how to wear clothing with style and finesse. For that reason, she is consistently one of the best dressed in a room, no matter what event she’s dressing for.

1. Colin Kaepernick. Mr. GQ himself never seems to go anywhere without dressing to the nines first.

Though Kaepernick didn’t take home the award for Breakthrough Athlete of the Year, which he won the previous year and Richard Sherman won this year, his style sure has matured since then.

Not to say that his past style wasn’t good by any means, it was great in fact. But it seems like he’s grown out of the frat-boy style of dressing. This usually consists of bright color-wheel coordinated hues and wearing sunglasses inside. Instead his look has matured as much as he has.

Kaepernick rocked a handsome royal blue two-piece suit and made great use of a tie bar and pocket square. The colors of this outfit compliment each other well. It isn’t a mess of brightly opposing colors but a uniform shade of a dominant blue supported by lighter and darker hues of that blue. But what I really have to give Kaepernick kudos for is the tailored high cuff on the suit leggings and showing a little ankle. It’s not just a European fashion trend anymore and it’s good seeing someone out there willing to try new trends and fashions while still maturing their own style.