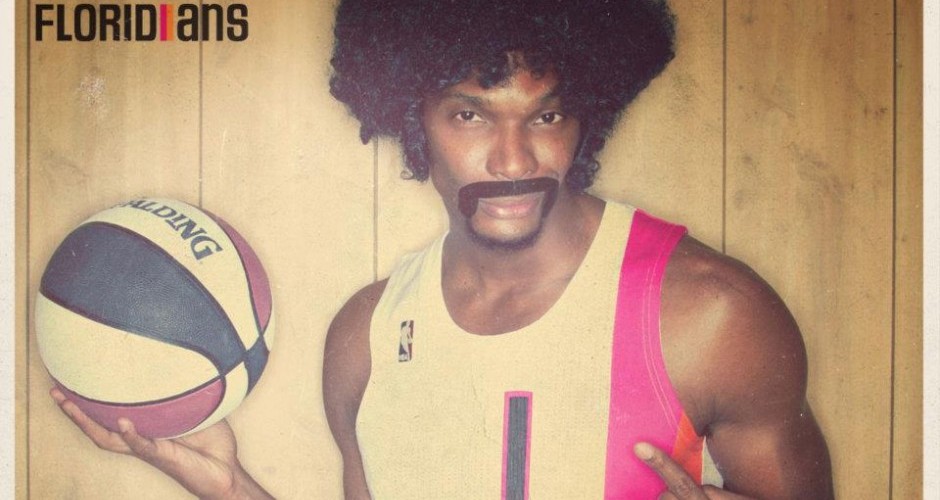 Fashions are a lot like history, in that they tend to repeat themselves. An old idea, such as a wide brimmed hat, has had its high point in many decades through out the course of fashion history. Others include the recent resurgence of neon colors, wayfarer sunglasses, and spandex (now affectionately known as “yoga pants”) that hearken back to the early 80s era of outlandish fashion. Often times, sports teams in the NFL and NBA like to mix it up and dust off their old duds from yesteryear that have found a new sense of appeal in a constant reemergence of old trends. But some of these jerseys should stay in the back of the closet where they belong while others deserve a second chance to see the light of day:

5. Miami Floridians – ABA Jerseys
Long before the likes of LeBron James, Chris Bosch, and Dwyane Wade hopped on the now defunct bandwagon that is

the Miami Heat, the Miami basketball team was known as the Floridians. After the ABA merged into the NBA they changed their name to the familiar Heat we all know today and their jerseys changed with it. Here we see a classic example of retro athletic fashion. A single power color, white or black, marked with two neon stripes of orange and pink that you might see at the local old abandoned roller rink on the outskirts of town. Far out man.

Plain, simple, elegant and groovy. The 80s Hawks jerseys were vintage in every sense of the word. Not unlike today’s NBA jerseys, these prove to have a certain flair that was lost in the late 90s NBA jersey fashion. They stick to a simple base red color with a white stripe accent and bring it all together with gold letters and trim. And it still looks good.

If ever you could call a jerseys “all that and a bag of chips” it would the Denver Nugget’s early 70s jerseys. A great blend

of royal blue with yellow trim, these jerseys made a statement at a time where everything you wore was in itself a statement. And the particular statement theses jerseys made? Well, rainbows look awesome.

2. Toronto Raptors – Early 1990s Jerseys
If you were born in the 90s, then calling these jerseys “retro” may make you feel like you’ve aged a bit. But hey, it’s 2014, so you’re getting older whether you like it or not. Back in the day when “Mighty Mouse” Damon Stoudemire was Toronto’s franchise player and cousins Vince Carter and Tracy McGrady were still wet behind the ears, the raptors had all the potential in the world. They also had potentially awesome jerseys. Taking on the pinstripes that were so fashionable in this era was not an easy thing to do. But combing those pinstripes with the purple base coloring looked great even if that giant red raptor took up most of the jersey. And who can forget Charles Oakley, he made it look better than anyone else!

1. Indiana Pacers – Early 1990s Jerseys
Quite frankly, I think the Pacers have had some of the best jerseys in basketball history since their ABA days. I loved the classic blue and gold with the pacer stripe across the chest, and even the late 90s incarnation of the jerseys had the added flair of navy with gold pinstripes. But the best by far were Indy’s early 90s jerseys. The beauty of these jerseys was that they called on the meaning of the word pacer. An abbreviation for the word “pace car” used in the Indianapolis 500, these jerseys had the added factor of having racing stripes on the side of the jersey! No body embodied that jersey, or that team more than the legendary Reggie Miller.

5. Detroit Lions – 1980s Jerseys
There was once a time when the Detroit Lions were a force to be reckoned with in the NFL, in short they had Barry

Sanders. One of the most dominating players in NFL history to have never reached the Super Bowl, before and during his tenure in Detroit the Lions sported the powder blue uniforms with silver helmets. Maybe that’s why these jerseys are remembered with such fondness or maybe it’s because powder blue just looks good on a football field.

4. Houston Oilers – 1980s Jerseys
Speaking of powder blue jerseys, how can one not remember these throwbacks? Back before the team relocated to Tennessee and later changed their name to the Titans, the Oilers had some pretty snazzy jerseys. Yet again, a great example of powder blue as a dominant color but the bright red trim as well? That just brought it home entirely.

3. Atlanta Falcons – 1980s Jerseys
The thing I love most about the Falcons retro wear is the helmet design. A solid red colored helmet with the falcon

insignia on the side was somehow mesmerizing. That and it brought their uniforms together. Though they may seem plain in today’s jersey standards, the all red or all black jersey were perfectly accented with the helmet. So much so they decided to bring the uniform back altogether.

2. St. Louis Rams – 1980s Jerseys
There’s just something about a royal blue and gold combination that is undeniably good looking and the 80s Rams attire is no exception. Another great jersey that was brought back, this jersey stands out as a testament to those who love color coordination. While some may scoff at the idea of royal blue jerseys with coordinated gold pants, it simply looks awesome when the helmets with the gold horns bring it all together.

1. Denver Broncos – 1980s Jerseys
There are two things people remember about the Broncos in the 80s. The first is one of the greatest quarterbacks to ever touch the laces of on a pigskin, John Elway. The second, their jerseys. Prominent and refined are two words that describe their uniforms. Prominent in the use of orange, which everyone knows is an almost impossible color to pull off in general, and refined in that these jerseys bring out every that is classic in football attire. Plain orange jersey, plain white pants and a plain blue helmet, albeit the stripe down the center and the insignia on the side, but plain nonetheless. It’s a jersey that proves when you bring together plain individual things, together they can make something memorable.