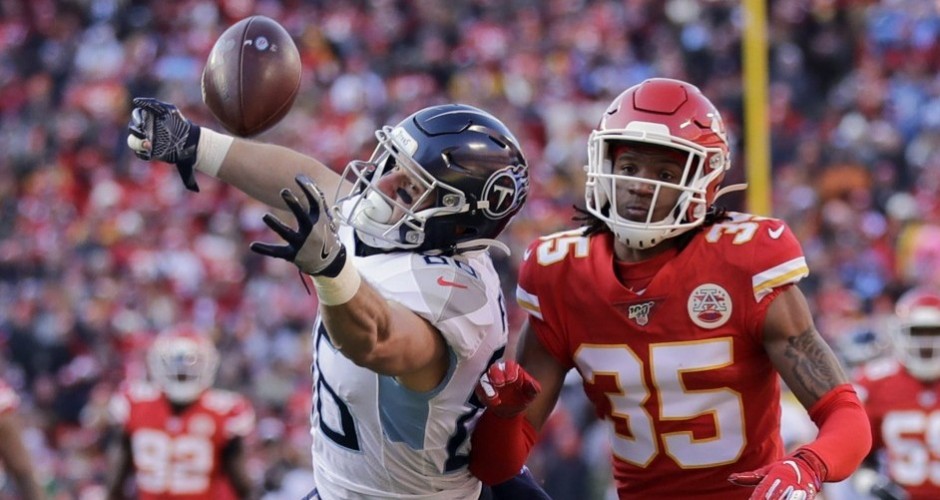 Perhaps no team in NFL history has faced such an insurmountable road to the Super Bowl as these Tennessee Titans. After effectively ending the Patriots dynasty in Foxborough two weeks ago – and again shocking the world last week by taking down media darlings Lamar Jackson and the one seed Baltimore Ravens – the Titans had the unenviable task of eliminating the Kansas City Chiefs (in Arrowhead, no less) on Sunday. While the Titans were in it for much of the first quarter – at one point even building up a ten point lead – the prolific offense of Patrick Mahomes and the Chiefs was too much to overcome, and the Titans found themselves on the losing end of the AFC Championship game, 35-24.
The game plan was simple, as it had been for much of these playoffs. A healthy dose of Derrick Henry on the offensive side of the ball while attempting to make mere mortals out of opposing quarterbacks on the defensive side of the ball. While the Patriots and the Ravens were unable to bottle up Henry, the Chiefs were able to limit his production. The 247 pound running back out of Alabama ran for just 69 yards on nineteen carries, his first game of the playoffs where he failed to top 100 yards.
The other facet to the Titans’ game plan was equally ineffective. Patrick Mahomes was a surgical 23 of 35 passing for 294 yards and three touchdowns. Additionally, the Texas Tech product accounted for 53 yards rushing, including a 27-yard knockout blow at the end of the first half in which he tiptoed the sidelines and spun through multiple missed tackles before diving across the goal line.
The Titans’ defense, which had been so gritty and dominant against the Patriots and the Ravens, could not match the Chiefs speed and the precision with which they struck on Sunday. Big plays to receivers Tyreek Hill (5 rec, 67 yds, 2 tds) and Sammy Watkins (7 rec, 114 yds, 1 td) proved too much to overcome as the Chiefs simply had too much firepower and playmaking ability from their skilled players.
The Titans (9-7) now head to the offseason and their priorities will clearly be locking up Derrick Henry and quarterback, Ryan Tannehill, for the foreseeable future. Tannehill, who was acquired from the Dolphins and thrust into action in Week 6, finished the game Sunday with two touchdowns and 209 yards passing. As the Titans say goodbye to former number two pick Marcus Mariota, they welcome in a new cornerstone of their franchise in Tannehill. In 10 appearances for the Titans this season, Tannehill accounted for 22 touchdowns and only six interceptions, while completing over 70 percent of his passes. Above all else, the consistency was there week in and week out with Tannehill, something that Mariota had failed to provide.
This was a true underdog story in many respects. The future is bright, however, with such a promising young core in Tannehill, Henry, and rookie receiver A.J. Brown. Under the leadership and tutelage of head coach, Mike Vrabel, these Titans figure to make yet another run next year.