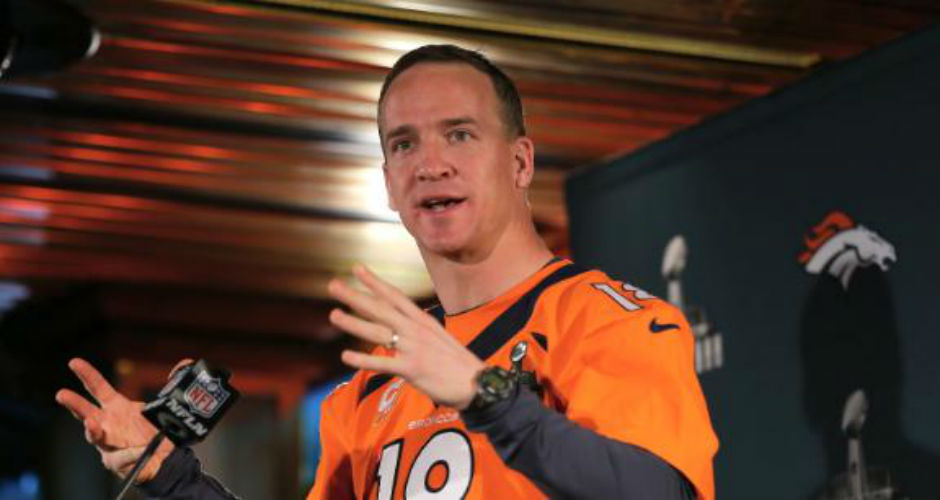 The National Football League is set to conclude the 2013-2014 season in grand fashion this weekend starting with the NFL Honors Awards Show on Saturday, Feb. 1 at 8PM ET. Then, of course, the NFL’s grand finale — the Denver Broncos vs Seattle Seahawks in Super Bowl XLVIII on Sunday, Feb. 2 at 6:30PM ET.

Today we’ll discuss who could take home the top Awards on Saturday and breakdown which team has the edge in the Super Bowl. At the end, I’ll give my guess on which team will leave the New York/New Jersey area as World Champions.

This could quite possibly be a historic weekend for the sheriff. Manning is already the only player in NFL History to win the Associated Press Most Valuable Player Award four times. There’s absolutely no way he won’t get another — not after the season he just had. For Offensive Player of the Year, LeSean McCoy had a great season — but again, he’s not beating the sheriff.

San Diego Chargers WR Keenan Allen was awesome this past season, but Eddie Lacy was a dog. His 1,178 yards, averaging 4.1 yards and 11 touchdowns was brilliant. Lacy helped carry the Green Bay Packers to the playoffs without Aaron Rodgers at helm for the final seven games of the season.

Buffalo Bills’ rookie LB Kiko Alonso was an animal this past season leading all rookies with 159 tackles. He also had four interceptions, two sacks, one forced fumble and two fumble recoveries.

There are several great players deserving of this award: Robert Quinn, Richard Sherman, Earl Thomas, Luke Kuechly and Navorro Bowman. I just believe out of all those players, Robert Mathis played on the weakest defense. Yet, Mathis racked up 19.5 sacks, eight forced fumbles and 59 total tackles. He was a beast and one of the major reasons the Indianapolis Colts made it to the playoffs.

Revis successfully returned from his ACL injury and had a Pro Bowl season. He’s still one of the best in the game.

This is another tough category. Andy Reid in his first season with the Kansas City Chiefs, a team that only won two games in 2012, won 11 in 2013. He deserves this award and the same goes for possibly the GOAT (Greatest of All-Time) Bill Belichick. People forget the New England Patriots were without their top five best receiving targets from 2012, for various reasons. Gronk obviously couldn’t stay healthy. They also lost Al Pacino aka Aaron Hernandez to the judicial system. Yet the Patriots made it all the way to the NFL Championship game against Denver. However, I think Ron Rivera wins this award because after starting 1-3 in 2013, he was on the hot seat in Carolina. But he turned that team around and ended up winning 12 games — earning a playoff berth.

The Legion of Boom is no joke. Seattle’s secondary will simply man you up all day and force you to throw perfect balls. Issue is, if anyone is capable of throwing perfect balls, it’s Peyton Manning. Seattle doesn’t get too exotic on Defense. It’s a fairly simple scheme. But their length in the secondary, speed at linebacker and talent on the defensive line helped make them the league’s best. However, this game will be played on a neutral field. I think Seattle’s defensive line gets off the ball slower when away from their home turf. Peyton Manning likely won’t test this secondary by throwing the ball deep — he’s made money underneath all season. Denver loves to create separation by orchestrating perfect pick/rub routes. The LOB is great, but it’s tough to pick against Peyton Manning and this Denver Broncos offense. Edge: Denver Broncos

Although no one will admit it, Russell Wilson really hasn’t played lights out in about six weeks. Not that he needs to, however, because he has a beast in the backfield and a great defense. But if Seattle gets down by a couple touchdowns, Wilson will be forced to show up and lead this football team. Having Percy Harvin back will be a plus, but it’ll be a miracle if he even plays the entire game. If Denver wins this game, they’ll win it on offense. I’m not picking against Beast Mode — Marshawn Lynch. Edge: Seattle Seahawks

The Denver Broncos have a kicker in Matt Prater who kicked a record breaking 64 yard field goal earlier in the season. They also have a 5ft 5, 170 lbs speedster in Trindon Holiday who is capable of breaking a long one at any time. The Seahawks have a pretty good kicker in Steve Hauschka and a X-Factor in Percy Harvin who is a dangerous returner. But again, who is to say that Harvin is able to stay healthy? I’ll take Denver because of that question. Edge: Denver Broncos

Denver Broncos’ Head Coach John Fox is a good coach and has been to the dance before with Carolina. However, what Pete Carroll has done for the Seattle Seahawks is nothing short of exceptional. He can make players run through a wall with the simple word — “compete.” If Seattle wins this game it’ll be heavily attributed to Carroll, who is the energizer bunny for the Seahawks. Edge: Seattle Seahawks

As you can see, this is a very good match-up. It should be a great game and it’ll probably come down to the final few minutes. But this is just Peyton Manning’s time. The main argument people bring up when discussing if Manning is the GOAT is he can’t win the big game. If Manning is able to win his second Super Bowl, with a different team, after a serious injury — how can you not call this guy the GOAT? This guy is everything at the position. I’m taking the Denver Broncos in this game for that very reason.