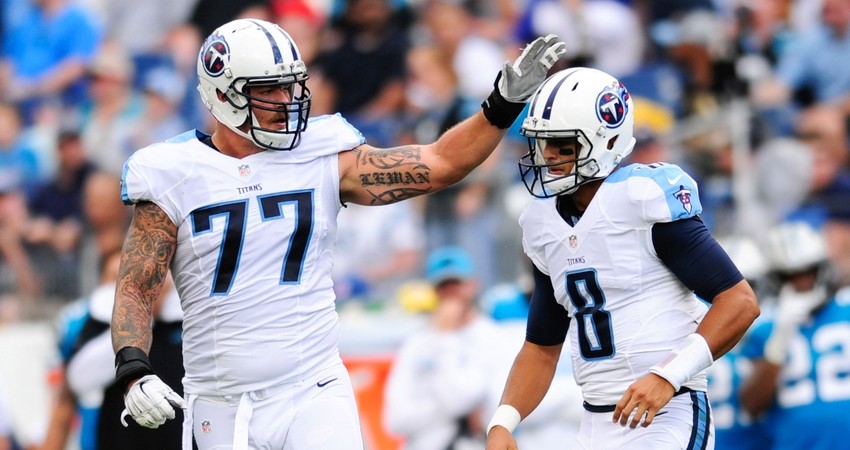 Week 3 of 2016 was not kind to the Tennessee Titans. They were facing the Oakland Raiders at home and lost in a close one 17-10. The Titans had one shot to tie the game, as they were down seven with the football and 1:51 left on the clock at their own 20 yard line. The Titans would make it all the way down to the three-yard line in their drive, but an untimely unnecessary roughness penalty on Taylor Lewan, an offensive pass interference call on veteran Receiver Andre Johnson while catching a touchdown and poor execution doomed the Titans in their attempt to tie the game . All in all, that win could have been the one win that could have put them in the playoffs in 2016, but alas, it did not happen and the Titans were sitting at home in the playoffs. Coming into this season, the Titans have all kinds of expectations and here come the Raiders to try and thwart any momentum the Titans have coming in. Will they win again versus the Titans at Nissan Stadium or will the Titans rise up and go get the win? Only time will tell, but so will some of these keys to the game. Let’s start with the offense.

The Tennessee Titans were very good in the running game last season, but they lacked in the passing game and it showed versus the Raiders last year. The Titans were probably the only team that was not able to take advantage of the Raiders through the air (the Raiders were 24th against the pass in the NFL in 2016). The Raiders have pretty much the same cast in their secondary this season but the Titans upgraded their receiving corps with the likes of veteran wide receiver Eric Decker and rookie wide receivers Taywan Taylor and Corey Davis. The Titans need to stay true to their identity of running the football first, but they also need to get those explosive plays in the air that can expose the Raiders secondary and they need some of these receivers to make plays where it matters even more: the redzone.

2) Keep The Mackin’ To A Minimum

Khalil Mack is one of the best pass rushers in the NFL, but in Tennessee last season, he was non-existent. The dynamic young defender did not record a sack in what was the third game of his sackless streak. Mack may have struggled out of the gate but he ended last season with 11 sacks, which is not bad. We have all seen what a disruptive force he can be and once he gets going, he makes things easier for the rest of their defense. The challenge to keep him out of the backfield primarily falls on two guys: offensive tackles Taylor Lewan and Jack Conklin. If both physical, rugged offensive tackles can maintain their leverage, move their feet and be physical with Mack, then Mack could be in for a long day like he had last season against the physical Titans offense.

3) Body Blows Wear Them Down

The engine in this offense is easily DeMarco Murray. The veteran running back arrived in Tennessee, he has been running hard and reminding people of the running back that he was in Dallas before he signed with Philly in 2015. He could see some of his carries taken away to the younger Derrick Henry, but he still should see at least 20 carries. When he gets that many carries, he and that Titans offensive line began to wear on their opponents. For a team like the Raiders, they were not good against the run anyway last season, giving up an average of 4.8 yards per carry. If this continues and the Titans feed Murray and the running game a suitable amount of times, then Oakland could be on skates when it comes to winning time defensively.

The Titans defense will be facing one of the best quarterbacks in the NFL in David Carr. The youngster has shown over time that he can make all the throws as well as make big plays when they matter the most. With the weapons he has at his disposal, the Titans defense could be in for a long day. The only way that Tennessee can change that is to make Carr as uncomfortable as possible and the way they can do that is to bring pressure from all sorts of angles. The wizard of the zone blitz, Dick LaBeau, is one defensive coordinator that can present problems and he knows he has a challenge on his hands. If he can free up the likes of Brian Orapko, Jurrell Casey and others to get to Carr, then we will find out if Carr can take the pressure or if he wilts under the spotlight. The more pressure the Titans bring, the more we will get our answer and the better the Titans increase their chances of winning the game.

2) There Is No Running Here

The Oakland Raiders were known as a passing team with the exciting weapons they had last season, but no one spoke of the running game they had. The Raiders, led by departed Latavius Murray, were quietly a very solid rushing team last year. Although Murray is no longer there, the running game should still be good for the Raiders this season, but not against the Titans. The Titans defense was very good against the run and the more they are able to take away the run, the more it puts the Raiders in obvious passing situations, which are easier to defend. This is a game where Jurrell Casey has to be huge.

The Raiders have one of the best duos in the NFL at wide receiver in Michael Crabtree and Amari Cooper. Both receivers went for over 1,000 yards receiver in what was an explosive passing game for Oakland. This passing game spells danger for the Titans, who had one of the worst secondaries in the NFL last season. The Titans secondary added a couple new members this offseason with former Patriot Logan Ryan and former Jacksonville Jaguar Jonathan Cyprien. These two pieces are supposed to help them be better than last season. Well, this game will show us if the Titans have gotten better or if they are still going to be grasping for straws. If they are what the Titans think they are, then the Titans will make a few plays while holding the duo of Crabtree and Cooper in check.

Both teams have aspirations of making the playoffs and hopefully doing damage, but that all starts with Game 1. Will the Raiders continue to roll or will the Titans show that they are ready to play with the big boys? We will see come Sunday.