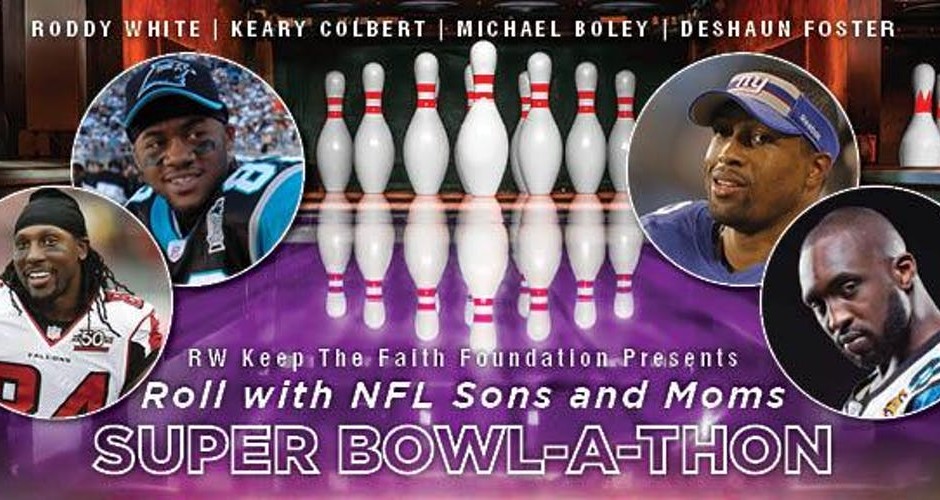 Super Bowl week in Atlanta – home of 1,000 events before the event. One event that stands out and you won’t want to miss will be the Super Bowl-A-Thon on Friday, February 1, 2019 at Bowlmor Lanes in Atlanta, GA.

This traveling Super Bowl event started back in 2000 and was created to bring support and awareness to autism. Talk About Curing Autism (TACA) is a national non-profit organization dedicated to educating, empowering and supporting families affected by autism. For families who have just received the autism diagnosis, TACA aims to speed up the cycle time from the autism diagnosis to effective treatments. TACA helps to strengthen the autism community by connecting families and the professionals who can help them, allowing them to share stories and information to help improve the quality of life for people with autism.

Organizers of this amazing event are former NFL greats DeShaun Foster, Michael Boley, Roddy White, Keary Colbert and their mothers Cheryl Foster, Marilyn Pointer, Jonethia White and Berma Colbert. Having two sons of his own with autism, Michael Boley has been an inspirational voice in spreading autism awareness – the bowling event does just that.

The bowling event isn’t the only way these gentlemen and their mothers are spreading awareness. Former Carolina Panthers running back, DeShaun Foster, and his mother, Cheryl, have also hosted a football camp for the past eight years. In the many camps DeShaun has taken part in over the years, he couldn’t help but notice the amount of children with special needs in attendance supporting one of their siblings. At the time, there wasn’t anything in place for these children to take part so DeShaun and his mother decided it was time to change that. Thus, the Foster’s Challenger Flag Football Camp for children with developmental disabilities, many of whom have autism, was created.

This year the group has partnered with former Atlanta Falcon, Roddy White (RW Keep the Faith Foundation), and his mother, Jonethia White, to bring awareness to epilepsy – something Jonethia suffers from herself. Epilepsy is a chronic disorder, the hallmark of which is recurrent, unprovoked seizures. A person is diagnosed with epilepsy if they have two unprovoked seizures (or one unprovoked seizure with the likelihood of more) that were not caused by some known and reversible medical condition. Often times, the cause of the seizures is completely unknown. According to the National Institute of Neurological Disorder and Stroke, it is estimated that about 20 to 30 percent of children with autism will develop epilepsy once they reach adulthood.

I had a chance to speak with Cheryl Foster about the event and the group’s passion for giving back spoke volumes. “Whenever you step outside of who you are to do things to help other people, to me that’s something that says I truly love you and I am here for you,” Cheryl said. Her compassion for others rang even louder. “Even if your world seems perfect, there are other people that are struggling with the same things every single day, but we don’t get to see that. The least we can do is create something that can give them feel good moments.” A day of laughter and bowling with NFL greats and their mothers is certainly a feel good moment!

A special thanks also goes out to Autumn Burton, Tina Carter, Casey Thomas for helping out with the event.

A ticket to the event starts at only $50 (with student discounts available) and will include food, drinks, bowling, music, and photo opportunities. While bowling, auctions will be held to support the cause. So come on out and Roll with NFL Sons and Moms.

For more information about TACA:  https://tacanow.org