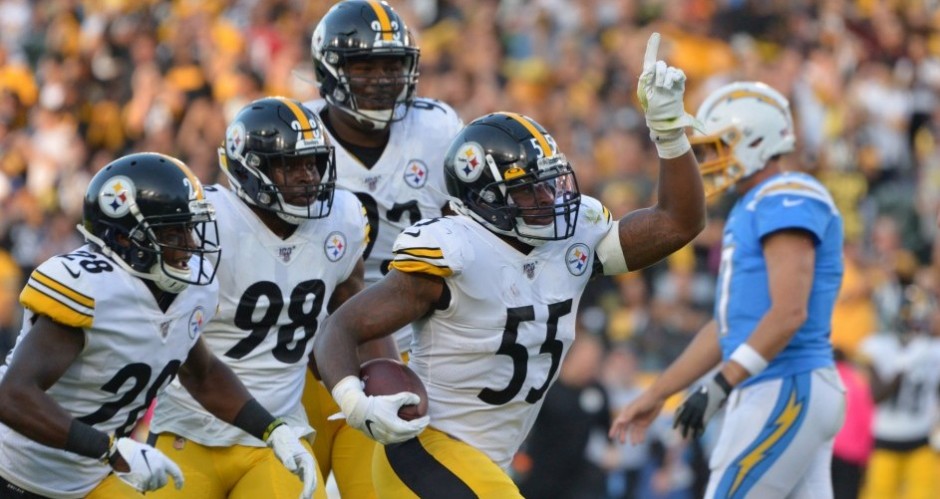 The nightcap of Sunday’s full slate of games culminated with Devlin Hodges and the Pittsburgh Steelers (2-4) trouncing the Los Angeles Chargers (2-4). Let that sink in. Devlin Hodges and an injury-laden Steelers team that had only one win coming into Sunday’s matchup. The rookie quarterback, thrust into action due to injuries to both Ben Roethlisberger and backup Mason Rudolph, was a consistent 15/20 for 132 yards and 1 TD on the evening. Hodges didn’t have to do much, but then again he was never asked to, as the Steelers took a 24-3 lead into the fourth quarter of the game.
The Chargers second possession of the game was a microcosm of their season in every sense of the word. One step forward, two steps back it would seem for these 2019 Chargers. A Philip Rivers backward pass to Melvin Gordon that sailed over the running back’s head was subsequently scooped up by Pittsburgh linebacker, Devin Bush, and promptly returned for a touchdown.
The very next Chargers possession, Rivers’ pass to wide receiver, Keenan Allen, was intercepted by the aforementioned Devin Bush. Pittsburgh running back, James Conner, then punched it in for a 12-yard touchdown run (he’d later catch a touchdown), quickly extending the lead to 14-0 in the second quarter.
In an all too familiar trend, the Chargers defense was gashed by yet another tandem of talented running backs. The pair of James Conner and Benny Snell, combined for 116 yards on the ground and 92 yards through the air.
While the Chargers did score 17 unanswered points towards the end of the game, do not let the final score fool you. This game was not even close, and in many respects, was a total mismatch. On a night where the Chargers welcomed back tight end, Hunter Henry (8 rec, 100 yds, 2 TDS), there wasn’t much else to celebrate. Rivers may have been 26/44 with over 320 yards, but he spent much of the game on his back and making gif-worthy, head-scratching motions on the sideline. Allen pulled his best disappearing act of the season, only accounting for 33 yards on 2 receptions. Gordon, who believes himself to be worthy of a $14 million annual contract, contributed 18 yards to the evening’s festivities. Austin Ekeler, arguably the one bright spot on the season and most consistent of the offensive players, only totaled 28 yards from scrimmage.
So where do they go from here? Well, in a literal sense, they go to Tennessee for a Week 7 matchup with the Titans. But perhaps more importantly, what changes does Anthony Lynn make to this offense? Is his attempt to reinsert Gordon back into the offense messing with the team’s chemistry? Are the injuries on the defensive side of the ball too insurmountable at this point in the season? Time will tell…..but they’re running out of it, and fast.