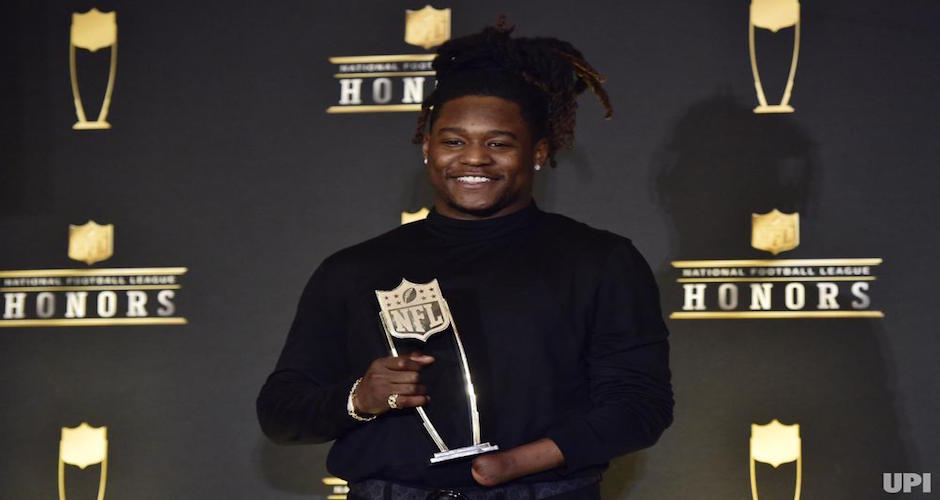 Shaquem Griffin from the Seattle Seahawks was recently named the winner of the Game Changer Award presented by Gillette at the 2019 NFL Honors ceremony. Griffin was born with Amniotic Band Syndrome, a condition in which his left hand developed irregularly. But when it’s all said and done, that’s not what he wants people to remember about him.

At the age of four, Griffin had his left-hand amputated. This setback did not discourage Shaquem and his twin brother, Shaquill from their dream of playing professional sports together. Growing up in Central Florida, Griffin ran track and played baseball and football. Despite his disability, Griffin’s football skills caught the attention of the University of Central Florida football program, where he and Shaquill both played. In the 2018 NFL Draft, the Seattle Seahawks drafted Shaquem, the team his brother was already a member of, making their childhood dream a reality.

Game Changer Award Winner Shaquem Griffin wants to be known for his football abilities, not his hand. Reporter – @CaritaCParks pic.twitter.com/GRHyTzTFXy

Although he has dealt with many challenges to get where he is, Griffin chooses to have a positive attitude and encourages everyone else to do the same.

“You have every single right and every single choice to live your life in a positive way,” Griffin said during his acceptance speech. “We don’t worry about negativity because we’re too positive.”

Griffin has been an inspiration to young athletes all over the world, especially those who also suffer from Amniotic Band Syndrome, showing that anyone with determination can participate in any sport they set their mind to.

The Game Changer presented by Gillette was created to celebrate those who are committed to moving the game forward. This award recognizes a member of the football family who has positively contributed to the sport and his or her community.