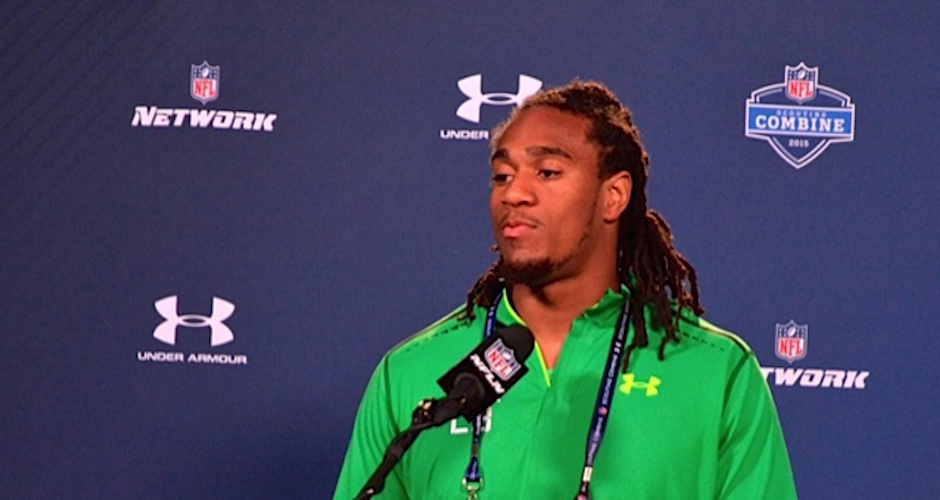 There has been much speculation that Shaq Thompson will be subject to a position change at the next level. Lucidly flabbergast by the notion that he’s not big enough to play linebacker on football’s biggest stage, Thompson took on reiterative questions regarding which position he’ll play in the NFL. Thompson used

Saturday’s media session to staunchly apprise the audience gathered before him as to which position he’s best suited to play. Thompson said,

“I’m a linebacker. …That’s where I feel most comfortable. I like to be on the line of scrimmage. I feel like I’m physical enough. I’m probably not the biggest but I fee like I have a lot of heart down there.”

In a 4-3 alignment, Thompson has stated that his preference is to play strongside linebacker. While most of his experience is at outside linebacker in a 4-3 front, Thompson knows what positions suites him best should a 3-4 team acquire him.

“My last experience [playing in a 3-4] was last year, that was my first experience,” Thompson said. “My freshman and sophomore year I played outside linebacker in open space.

“If a team wants to see me at safety, I’ll put it out there that I want to play linebacker. …I tell them inside linebacker. …Teams I met with see me as a ‘Will’ in a 3-4.”

The allure of selecting an athlete like Thompson is that he’s a player that can be effective almost anywhere on the football field. In his final season at the University of Washington, Thompson took quality snaps at the running back position. Thompson accumulated 456 yards and two touchdowns rushing, averaging 7.5 yards per carry. There are a number of NFL scouts that prefer Thompson at running back, but Thompson shot down the idea of playing the aforementioned position next season. Thompson said,

“Running back is out of the question.”

Throughout the evaluation process, many NFL draft pundits, feel Thompson’s game is too finesse and have intimated that he is not strong enough to consistently get off of blocks. Thompson realizes he needs to continue to improve on disengaging from blockers, but doesn’t feel his play is emblematic of a player that is too weak, or too small to play linebacker in the NFL.

“I’m working on that and that’s a part of my game I need to tighten up and I’m going to get better with it.”

When asked if there was an incumbent NFL player he compares his game to Thompson said,

“Lavonte David, we’re about the same height. He’s a little bit taller than me. We have the same attributes. He has the speed to cover tight ends, running backs and all that and I feel like I can do the same thing.”

If Thompson is tasked with playing inside linebacker at the next level, there is a possibility he will essentially be the quarterback of the defense. Thompson spoke about what he brings to the table as a leader.

“I really don’t say much,” Thompson said. “I just lead by example and really just have fun and bring everyone else up.”

Thompson performed admirably at the NFL Scouting Combine. Below are his numbers from Sunday’s performance:

Thompson is not some enigmatic player without a position; he’s a linebacker who should be coveted by many NFL teams early in the 2015 NFL Draft. With a multitude of NFL teams adopting spread principles and flex tight ends being utilized more regularly, it’s vital to have a player like Thompson who can cover skill-position players in space.

Offenses are becoming more multiple by obtaining players with tremendous versatility. It is imperative that defenses keep pace by acquiring players like Thompson who are effective against the run and the pass. Thompson has a rare skillset, which warrants him being taken in the first round of the 2015 NFL Draft.