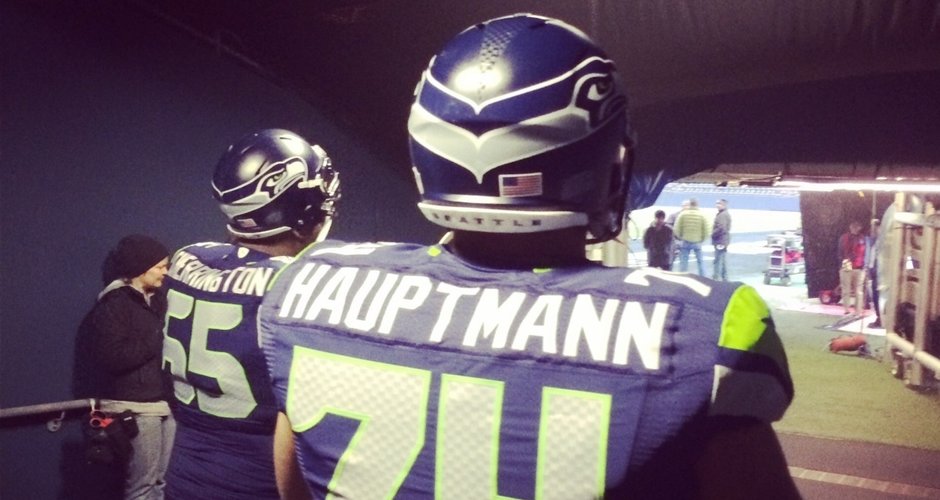 Sometimes the windy road leads to better things then you could never imagined. Take for instance Landon Cohen of the Seattle Seahawks and Caylin Hauptmann of the New England Patriots. These are two names you might not hear leading up to the Super Bowl this week. But despite being journeymen in the background, these two help make the Super Bowl caliber teams truly who they are. How many stories do you hear about leading up into the Super Bowl about this type of player not many would be assumed. Many media sources quite often overlook these type of guys,but not us.

What a story Landon Cohen has. Pro player Insiders, Theresa Villano, caught up with South Carolina native in his hometown as a free agent right after playing his 7th season with Chicago Bears. Cohen spent part of his summer teaching kids about juicing, healthy lifestyles, Bikram Yoga, and inspiring kids to make good decisions. Yeah.. these are things that you might not expect from a 260 pound guy. Landon is different. After a pre-season with the Buffalo Bills and being released, Cohen was okay with not being on an NFL team. Instead of moping around, Landon focused on his workouts,his Jujitsu training and his limo business. Even ask the people in his community. He is known as one of the friendliest guys in town.

Maybe “friendly” had everything to do with what was next. Cohen’s physical size, experience and positive vibes landed him in Seattle literally two weeks ago. The defensive tackle told us after the NFC Championship game that, “It’s been a super fun experience. The team chemistry is a family and fun environment. I truly enjoy the organization.” It’s pretty ironic how perfect of a place the Seahawks are for his personality and his “together we are stronger” mentality.  When asked about his new quarterbacks mind set he said, “Russell is an unbelievable competitor. If I was going in rough water I would take him with me.”

Next we look at 2 year Caylin Hauptmann, a proud Florida International alum. Pro Player Insiders met him at media day with the reigning Super Bowl champion Seahawks. The offensive tackle signed with the Cleveland Browns as an undrafted free agent in 2013, but soon after signed with Seattle that September.But after being released and a crazy off-season Caylin is playing in red, white and blue now. Can you imagine the odds of going to the Super Bowl on a different team back to back years?

The former record breaking, high school shot putter from Los Angeles is still sorting through his blessing. “The two organizations have two different styles of winning. I still think about how exciting it is to play in the Super Bowl again.” When asked if it will be weird going in to play a team he knows so closely Caylin said, “As for who we are playing it is just another week for us. We have a goal. As Patriots we train day in and out to succeed at that goal.”

Like Cohen, Hauptmann has the up most respect for the leader of his team. “Tom Brady is one of a kind. He is more than a great teammate and great quarterback. One thing is for sure, I’m happy he is on my side of the ball.” We often overlook the journeymen, because they take a less glamorous path. But it sometimes appears most evident that these type of players are the most appreciative for the opportunity, their leaders, and to simply be a part of football at its best.