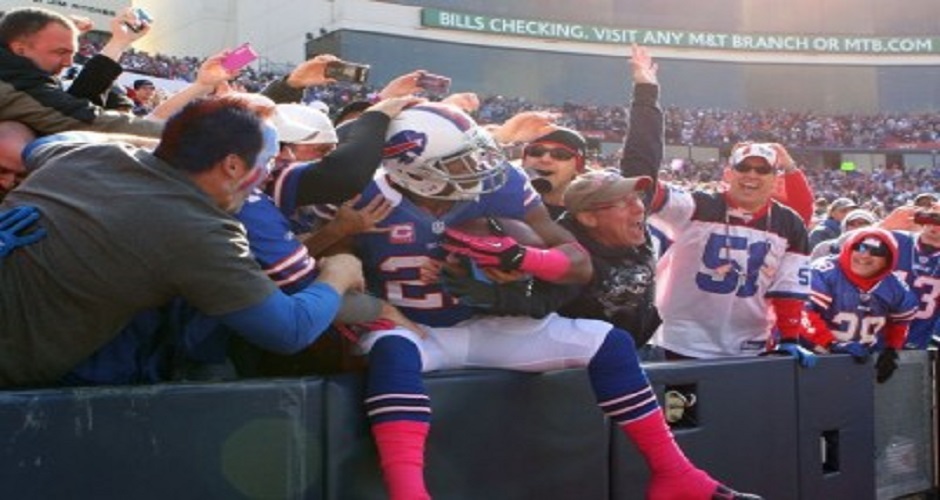 Fred Jackson is exactly where he needs to be…back with beast mode. In-FRED-ible can officially turn green like the Hulk, as he is ripped and ready for WEEK 1 with the Seattle Seahawks. If this isn’t a perfect fit (on the team know as the ‘Boy Scouts’ of the NFL) we don’t know what is. The 34 year old running back is in the best shape of his life and is ready to run side by side with his former teammate and friend Marshawn Lynch.

This is great news but there are fans back in Buffalo who are still upset with the Bills decision to allow him to leave. Like this little girl pictured below.

For more than half of her little 4 year old life; Audrey of Buffalo, NY has been a huge Jackson fan. After hearing that the believe #22 was released by the Bills Audrey’s mother, Ayshia Ryan had to break the news to her. Ryan posted this video on her Facebook page and it has received over 15,000 views because of the heart break her daughter felt.

In addition to the video, Ryan wrote a message to Jackson thanking him for being an amazing role-model of dedication for her daughter.  Read it below:

As a mother, it was easy to support thanks to his heart on the field and off. From taking time out for a quick photo at a signing, to allowing her to talk his ear off and invite him and his entire family to her birthday party while at a chance passing in Target, he was a constant class act no matter what (or where) the situation arose. I’m more than thankful that I had the opportunity to take Audrey to see him in an amazing performance this past weekend for her first #Bills game, but I’m heartbroken that I have to tell her she may never see him play in a Bills jersey again.

#ThankYouFred for being an amazing role-model of dedication and heart to an almost 5 year old who is crazy about football. Although we are @buffalobills fans through and through, we look forward to supporting you on ANY team that is lucky enough to experience the #InFREDible #FredEx.

–Aysia Ryan and Audrey your #1 Fan

Not only was this shocking and sad for this 5 year old but the Buffalo Bills Mafia had a hard time with the teams decision, as well. The hashtag #ThankYouFred literally trending for 2 days last week, but that doesn’t even come close to the impact he and his wife, Danielle  Jackson, and their 4 children have made in Buffalo. The dude was Walter Payton Man of the Year. That speaks for its self.

Although Buffalo will continue to miss Action Jackson, Pete Carroll is amped about Fred’s official arrival as a third down back. “I’ve asked him to really dig into the throwing game so that he can be a third-down guy for us,” Carroll said. “He’s not going to have any trouble with the run game, he’ll know what’s going on there, he’ll pick that up, but the pass-protection stuff is really what will tax him the most. He understands it, he’s a good pass-pro guy and he’s a terrific catcher, so that part is going to fit in really well, the security of that. We like Marshawn on third down, we like using him there, but he needs a break now and then, so I like to have a real steady guy going in,” said Carroll during an appearance on 710 ESPN in Seattle Monday.

Jackson averaged over 40 catches a year during his eight seasons with the Bills, where he is the franchise’s third all-time leading rusher. The 12th Mans gain will be missed at Ralph Wilson Stadium and especially by his little brother on the team S Aaron Williams. But clearly fans like Audrey will be a #22 fan for life.

In words of the Division III star, “I’m looking forward to showing that this old man still has something left in the tank.” And we are ,too. #ThankYouFred

Fred and his youngest daughter pictured below say, ” Thank you guys enough for all the support over the years!! Maecen says ✌!”

Here are more photos of Jackson’s #1 Fan and how much she grew up loving him. Note the amazing Halloween costume called a “Fred Jack-o-Lattern.”