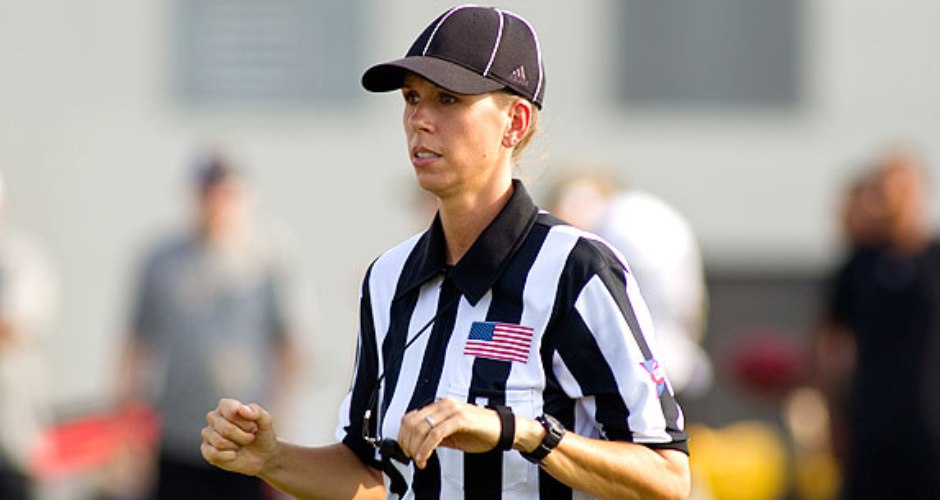 As the New Orleans Saints prepare for their season, one of the most notable new faces with the Saints  is neither a free agent pickup, nor one of the team’s draft picks. One of the most talked about figures at Saints camp is Sarah Thomas, soon to be NFL referee.

Thomas is on track to be the first full-time female NFL referee.  If everything continues to progress accordingly, Thomas will likely start in 2014. The 40-year-old Thomas has been an official for Conference USA for the past eight seasons, and has been officiating football games since 1996. Her talents have moved her through the ranks rather quickly. In 2009, Thomas became the first female to officiate a college bowl game, when she served as line judge for the “Little Caesars Pizza Bowl” between Marshall and Ohio State University.

Earlier this year, Thomas was brought in for three days at the Indianapolis Colts mini-camp, as part of the NFL’s officiating development program. Thomas is currently officiating practices and scrimmages for the Saints. She is set to officiate some preseason games in the coming weeks as well as part of her try out.  Thomas will also have to undergo extensive background checks as part of the program.

So far there have been no reports of complaints by Saints players in terms of her officiating, and head coach Sean Payton even acknowledged that Thomas has been doing “a great job.”

“Being able to experience the camps and then being able to do some preseason games, and just get a feel for the NFL level and the athleticism of these athletes is truly an honor,” Thomas said in an interview for ESPN.”I am a female and I’m very proud of that. I’m not trying to be one of the guys.”

NFL officiating is a tough racket to break into whether you are a woman or not. After being hired, referees often last longer than most players, serving the league for 20 sometimes 30 years.  For Thomas to officially be brought on full time in 2014, another referee will have to retire or leave the league somehow. While the NFL has not announced who is on their way out, they have acknowledged having their eye on Thomas for a long time.

Dean Blandino is the NFL’s vice-president of officiating. “It’s just something that happened,” Blandino said in an interview with the Associated Press. “She’s been in our pipeline for a while.” Blandino also spoke about the transition it takes to become an NFL referee. ”It’s similar from when a players jumps from college to the NFL,” Blandino said. ”Getting used to that type of speed is important.”

”The speed, yes, is there,” Thomas acknowledged. “These are just phenomenal athletes on both sides of the ball. The game has a tendency to slow down the most snaps you get and repetition. So, hopefully, the more snaps I get, things will start slowing down a little bit.”

Although Thomas will likely become the first full-timer, Shannon Eastin was already the first female to officiate an NFL game. Eastin was one of the replacement referees that the league brought in during last season’s officials strike.  Because of her experience, many thought Eastin would be the logical choice to become the first permanent female ref, but Last summer, the NFL Referees Association said Eastin shouldn’t be allowed to work league games. This was due to a conflict with one of Eastin’s off the field hobbies. She had been a past participant of the World Series of Poker, and such an event would contradict with the NFL’s gambling policy.

The news that Thomas is all but certain to become a permanent NFL referee in 2014 is huge for women looking to break through in the NFL. The reality is that the NFL, much like most other professional sports leagues, is undeniably a boys-club.  Aside from the obvious, that there have been no female players, the role of women in the NFL has been almost non-existent up until recent decades.  Aside from the occasional team-owner, women were few and far between in NFL organizations. Even in today’s expanded 32-team format there is only one current woman owner: Virginia Halas McCaskey is the majority owner of the Cleveland Browns.

But thanks to the hard work of a few dedicated women like Thomas, this trend seems to finally on its way out. What Thomas is doing for NFL officiating, Dawn Aponte may have a chance to do for an NFL front office. Aponte has been working as the Miami Dolphins Senior Vice President of Football Operations for the past three seasons. Aponte works closely with General Manager Jeff Ireland to put together the team.

“Dawn will say no when Jeff won’t,” wrote Ben Volin of the Palm Beach Post. “

According to Volin, Aponte often plays the role of ‘bad cop’ to Ireland’s ‘good cop’ when it comes to player negotiation talks. The younger Aponte is rumored to be Ireland’s eventual successor as Dolphin’s general manager, which would make her the first woman general manager in NFL history. This type of control over football personnel for a female would be unprecedented.

It seems like this is no better time than the present for women to start making some headway on that old NFL glass ceiling. Just over one-month ago we saw the first woman to ever try out for an NFL roster spot, when former collegiate soccer star Lauren Silberman tried out to be a kicker with the Jets. While Silberman’s tryout was less than impressive, no one can discount the enormous strides she made in paving the way for potential future women players.

The era of the boys-club in the NFL is slowly but surely on its way out, and nobody is sad to see it go. ”It’s always a positive when there’s diversity.” Dean Blandino added.

One Response to “Sarah Thomas: Breaking an NFL Glass Ceiling”