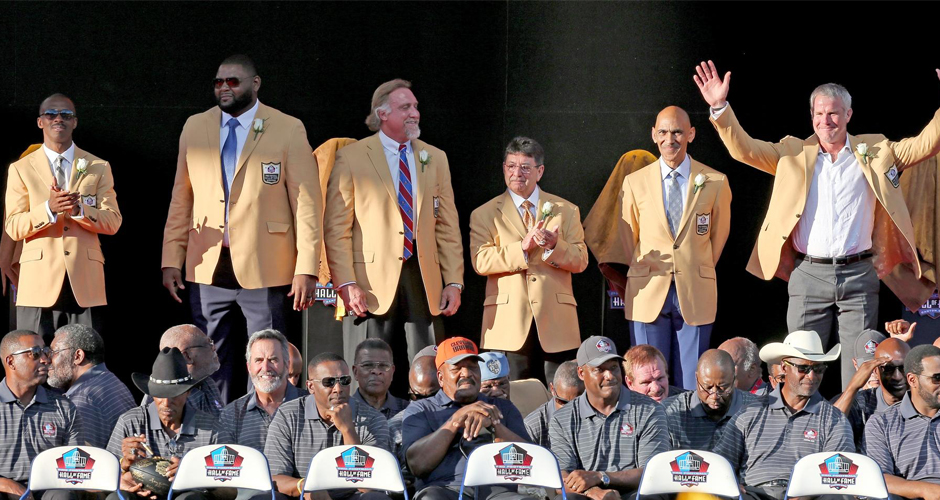 Last Saturday afternoon “Big O” Orlando Pace finally arrived in Canton for one of the greatest achievements of his career. He was getting ready to be inducted into the Pro Football Hall of Fame with the Class of 2016. The former Super Bowl winner wore his gold jacket and had a pair of shades he wore the whole time. Maybe the shades were to help him stay cool, calm, and collected, which is how he has carried himself throughout his career. Pace was warmly received in Canton as he was an Ohio native and lived down the road in Sandusky. Chris Berman introduced Pace saying, “He’s dished out more pancakes than Aunt Jemima.” From there, the legendary tackle’s eldest son, Justin, paid tribute to his father. He recalled his father being a highly touted star in high school in football and basketball. Throughout his tribute, Justin displayed the same cool, calm, and collected characteristics as his father. He wanted people to know Pace was not only a great player, but also a great dad. He spends a lot of time with his family taking them to various places. He finished by looking back on his father’s career and saying his favorite moments were the home games and the locker room after a win.

Following the video tribute, Pace went on to take the stage as the crowd graciously applauded him. The unveiling of his enshrined head sent jolts of energy through the Canton crowd. Pace’s golden face was filled with great detail as it had a permanent game day scowl along with his signature beard. He made his way to the podium and loomed over the crowd saying “wow” as if he was in a trance. It was almost as if being inducted was surreal and he needed to be pinched back to reality. Pace went on to reminisce on the moment when he was selected to be enshrined. He was gracious and called on his son to represent him at the ceremony. He wanted Justin to have this moment to cherish for life. Pace called this the culmination of all the goals he had set for himself at the age of 13 when he visited the Pro Football Hall of Fame and was mesmerized. He always wanted to be the best he could be on and off the field. Pace was extremely humble and kind to anybody he ever came across, but there was a fire that burned deep in his core. Courage and integrity were the highlights of his speech. At 13, he had the courage to set those goals, but as he got older he had the integrity to persevere and accomplish them.

Pace went on to acknowledge his family, former coaches, and former teammates. His love for his family runs deep and drove him through his perilous journey from high school all the way through his speech. He thanked his mom and grandfather for instilling their values in him and always being there for him. His mother, Joyce, was emotional and filled with tears as a proud mom. Pace’s cousin, Keith, was a big factor in helping him realize he could play college football. Keith played in college and Pace looked up to him. It was an emotional moment as both acknowledged each other when Keith stood up. The crowd recognized the gravity of this moment and applauded. Pace thanked his former high school coaches for believing in him and allowing him to play on the offensive line. At The Ohio State, he looked up to Korey Stringer and emulated his playing style. Pace was thankful for his college coaches allowing him to play right away as a freshman. Finally, he thanked Dick Vermeil and his Rams offensive line coach for helping mold him into a quality player. He wrapped his speech up reinforcing the notion of turning dreams into reality with ambition and commitment to excellence as he walked off.