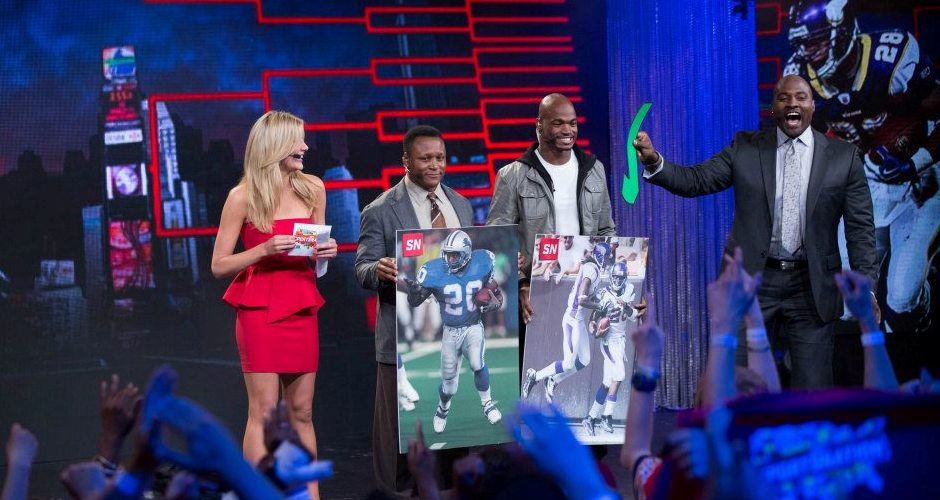 On Wednesday night the question was answered: old school wins.

In the much anticipated reveal of who would dawn the cover Madden 25 it came down to two people: former Detroit Lions’ great Barry Sanders and current Minnesota Vikings great Adrian Peterson. In a live broadcast of “SportsNation” on ESPN 2, the answer was announced. Barry Sanders is the next Madden cover boy.

The award was announced in a live event at the Hard Rock Cafe in Times Square, New York City.

After nearly 50 minutes of hype and build up as both players relived great football moments and were read fan votes for categories such as more relentless runner, flashier runner, more determined, most spectacular, and most awesome moment in Oklahoma (Sanders a Oklahoma State graduate, Peterson a Sooner).

The two legends also discussed the new rule passed this offseason that refuses running backs from lowering their heads against defenders. The mention of the rule drew a title wave of boos from the ruckus crowd that had to be quieted numerous times by “SportsNation” hosts Charissa Thompson and Marcellus Wiley.

Frenzied all along, the crowd finally drew silent once Anthony Stevenson of EA Sports, the video game’s maker, took to the stage with an envelope that held the answer so many wanted to know.

Once Sanders’ name was read, the Lions legend’s jaw dropped, his eyes grew wide and a smile spread from ear to ear as the crowd favorite blew the roof off the house with a full chorus cheering of “Barry! Barry! Barry!” It was a look of utter elation, surprise, shock, and joy as Sanders, who earlier told the crowd he was suppose to be on the cover back in 1999 but that changed once he announced his retirement, held the new cover image over his head.

Fans were just as ecstatic for the NFL Hall-of-Famer’s award, as he was clearly the crowd favorite.

“I voted for Barry,” said Carl W. a fan in the crowd. “I came just for this. I’m a Colts fan but I grew up watching Barry Sanders and he was so amazing. He was my favorite player growing up. I have his jersey in the car, maybe he can sign it after. I was here earlier and didn’t get the chance, so who knows.”

“Barry,” said Tony Ruiz, another fan. “This is my first time at the event. I’ve been to the draft three times, tomorrow will be my third but this is a first. I’m just curious to see who come out on top.”