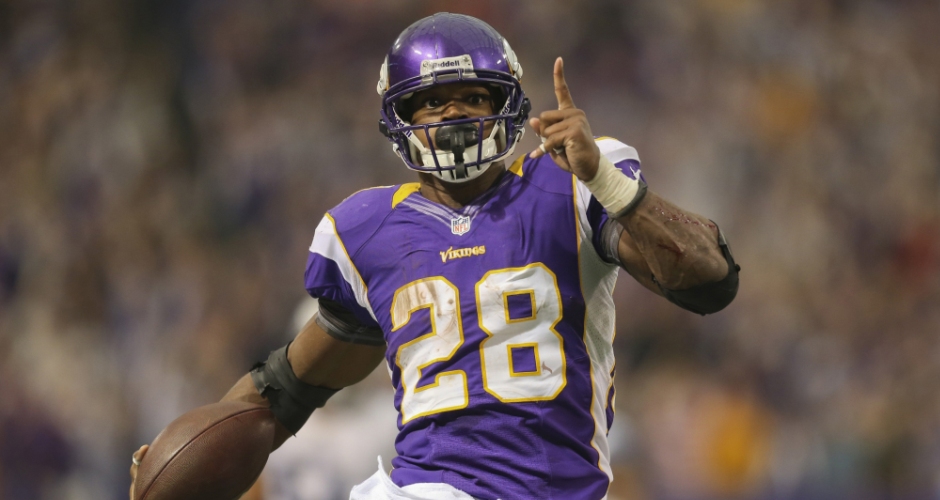 Who says the NFL is a passing league now? According to fans, it’s still very much a running back’s world.

With the now-annual Madden Cover Vote heading into its final days fans have pitted NFL Hall-of-Famer Barry Sanders against Minnesota Vikings all-day Adrian Peterson for the cover of Madden 14.

In the third year of the video game franchise putting the cover athlete in the hands of the fans, the franchise has brought the ultimate sports conversation to life by asking fans: “New School” or “Old School”.

Sanders, from the “Old School” brackett, has battled through legend after legend to make it to the final round. The former-Lions great was voted past Marcus Allen, Ray Lewis, Joe Montana, and just barely beat out Jerry Rice to move on to the championship round by a total vote of 52% to 48%.

Peterson, on the other hand, has bulldozed his way through the competition, defeating LeSean McCoy, Rob Gronkowski, and Arian Foster with ease. The most surprising victory was Peterson’s landslide 70% to 30% victory over Robert Griffin III, who was just announced as having the league’s top selling jersey.

As for Peterson, the reigning Comeback Player-of-the-Year who miraculously came back from a gruesome career threatening knee injury to come within nine-yards of breaking the single-season rushing record, will have to face the concern of the Madden Curse if he is to win.

In a well documented series of events, players who have been graced with the cover of Madden have suffered terribly the next season either with a poor statistical season or a devastating injury.

Could the curse now be broken? It’s anyone’s guess but we won’t have to guess much longer on who will grace the next cover of Madden. The winner will be announced on Tuesday, March 24 at 8pm on ESPN 2. Until then, fans can still go out and vote at ESPN.com.