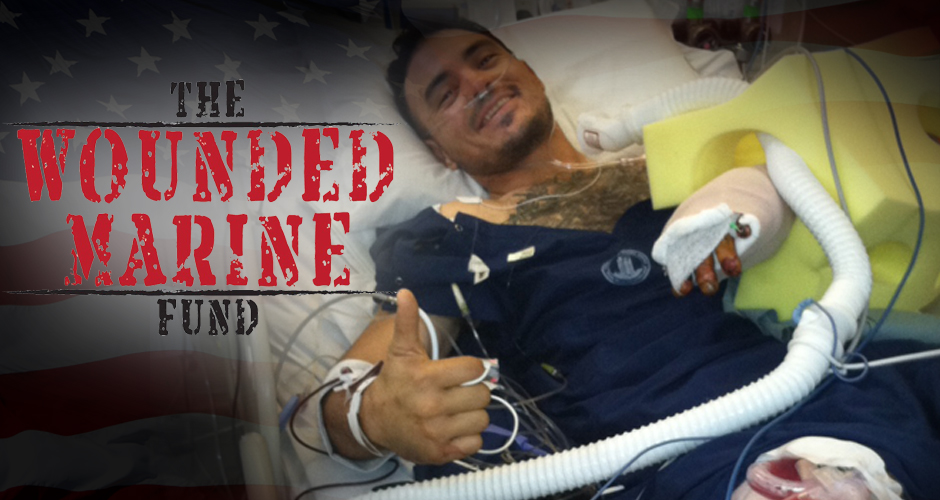 “We were so fortunate to get Michael back. We got enough of him back to love and hug him.” Tweed Fox is the father of Cpl. Michael Fox USMC, who tripped an improvised explosive device, losing both legs and the partial use of his left hand, while on foot patrol in Afghanistan, this past November.

This is where the Fox family journey begins. Fox began getting friends offering to do fundraisers for Michael. “I remember my son saying to me as this happened, ‘Dad I don’t need all of this. I would love to share it with my brothers.’ From my conversation with him that day in January of this year, we started The Wounded Marine Fund. ”

Since that moment eight months ago, Tweed began noticing so many other young heroes coming back and having no idea how to make ends meet or where to go for help. Fox also realized that the general public didn’t realize that these wounded warriors were back in the homeland limbless struggling to get through day to day life.

The NFL connection here lies within the humble, former NFL player Willie Buchanon. As a cornerback born and raised in San Diego (Oceanside), he started his career playing for the Green Bay Packers and became the defensive rookie of the year in 1972. Buchanon was fortunate to even play for his hometown crowd as a San Diego Charger. The three time Pro Bowler now finds himself running a real estate company, his own foundation, and giving back to amazing causes in San Diego.

“I met Willie 30 years ago. We would always run into each other playing golf in many local NFL Alumni tournaments. From there he began inviting me to play in all of his foundation tournaments. To date I have only missed one! I attended Willie’s 60th Birthday Party as an invitee of his Sister. From this friendship he has committed to helping my family and ultimately The Wounded Marine Fund.”Mr. Buchanon, with Linda Gandy of The Fairway Partners, a golf tournament company focused on raising funds for nonprofit organizations, has stepped up to bring current and former NFL players and celebrities to the Monte Carlo Night and Golf Tournament next weekend.“When Willie found out my son had been seriously wounded in Afghanistan, seeing it on the local news…he just picked up the phone and called. This guy has been there for support ever since.” This golf tournament is just another way for him to use his blessing and sphere of influence to support Michael and The Wounded Marine Fund. Tweed adds, “He literally said he could get as many NFL players as I needed to help with the tournament and the cause.”

CS Keys, San Diego TV personality on Channel 6 and friend to the pros is another “player” fighting this cause. Keys admits it has been an honor to be a part of The Wounded Marine Fund. CS supported the Tilted Kilt’s (San Diego Pub & Eatery) last Wounded Marine Fund event and acted as the host and MC. He also came out because the owner is a friend and a former Marine himself.

CS explains, “Supporting veterans is very powerful. At that event we were able to see the amputees on the stage and raise money for them. They are the ones that are the true heroes and inspiration here.” War and battle is often an analogy used on the football field. CS eloquently states, “NFL players go to battle every Sunday. Think about it. This may be a reason why so many players are coming to support this cause. They play football a game many love but the military men /women protect our freedoms. These are the real guys going to battle. ““Overall, our goal is to help these young heroes in a monetary fashion and help set up trust funds for them by rallying the community to come play golf. We are able to select Wounded Marine beneficiaries, and set up Trusts in their names. They are able to use these funds for any purpose that will help them regain their independence and make life easier. These guys are in a situation where their lives have drastically changed because of fighting in the War on Terror. The only qualifications to receive the funds include being a Marine and an amputee. The Wounded Marine Fund is really going to make a significant difference with several San Diego Veterans, particularly at our local Balboa Naval Hospital.”

San Diego is only the first stop on Tweed Fox’s bucket list. His goal is to open a chapter in Texas and in Maryland, both of which are places that wounded marines can go to do their physical therapy and have excellent prosthetic programs.Choking down tears, Tweed mentions, “I just get very emotional about my son. He has been through so much and I see all the people in San Diego coming together with The Fairway Partners for this Wounded Marine Fund Golf Tournament and Monte Carlo Night to support young heroes like him. It is just amazing to see that NFL players, celebrities and so many people that really care.” Tweed goes on to say, “The Fox Family is not letting any moss grow under their feet. We need to let the public know just how many of our young sons are coming back maimed for life. The Wounded Marine Fund is here to help!”

It is not too late to join the team effort. Support the Wounded Marines here in San Diego, as they did their part, now it’s time we do ours. Click here to Participate (in events below) or Donate: http://www.thefairwaypartners.com/Tournaments—Events.html

Help support the Cause, have a seat next to Billy Ray Smith, Randy Jones, Willie Buchanon, Hank Bauer, Duncan Hunter and some of the best from the River Card Tour. 1st Place wins the WMF Crystal Trophy and a La Costa Stay for 2, two all day passes to the World Famous La Costa Spa, and two Bottles of fine Wine. Here is what your $95 entry fee includes: Buy into the Celebrity Poker tournament, Dinner, Entertainment & Loads of fun. There will also be great deals on some fantastic silent auction items, Raffle prizes throughout the night, Craps, Black Jack, Roulette, Pictures and more. Call for the Military Discount. Live Performance by Todd Allen Herendeen singing the song that went Viral across the Country “My Name is America” http://www.thefairwaypartners.com/The-Wounded-Marine.html

Billy Ray Smith, John Kentera, Randy Jones, Willie Buchanon, and several other “Top Guns” have committed to not only be playing in the poker tournament but the golf tournament. Saturday starting a 9am we will be having a putting contests at La Costa where the winners have a chance at $5,000 and $10,000 putts. (Very exciting way to start off the round), 12pm will be a shot gun start for the 4 man scramble format, Hunter Steak House BBQ, Sushi on a roll, Stone Brewery, Payne Mason Cigars, U.V. Vodka, Chandra Rum, Tilted Kilt Girls, Mommie Helen’s Bakery, Naked Juice, Champagne Bakery, 5hr Energy Girls, Massage Chairs, and more will be all over the course. We have worked out discounted spa packages and rooms with La Costa for everyone, call for more details. 858-232-0030

More information: The Fairway Partners was created to help Non-Profit Organizations raise awareness and donations for their cause, through fun and exciting golf tournaments. We differentiate ourselves by having Celebrity and Pro Athlete golfers, who come from all over the country, to golf for a cause. With our personal, elite touch to each tournament we attract golfers ranging from professional, to competitive, to novice. Come hit the FAIRWAYS with us and raise money for your cause.