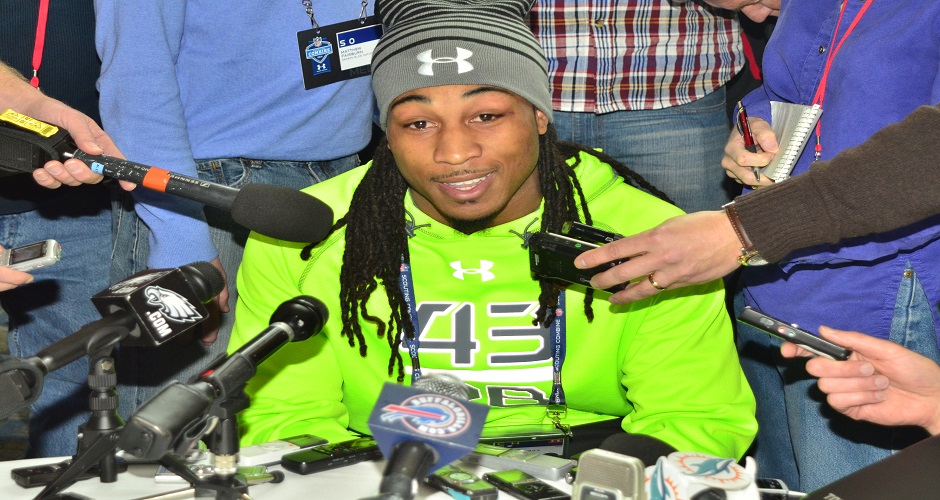 The defensive backs went through a media session on Sunday. Louisville safety Calvin Pryor provided one of the better interviews of the day. The best quote from him was that he will go out and play like his hair was on fire. That’s pretty interesting considering he has below shoulder length hair that is neatly braided. If you take a look at his game film, you will see exactly how he does that.

Pryor said that he would like to go to an aggressive defense like the Pittsburgh Steelers or San Francisco 49ers because it is a match to his aggressive style of play. You can see why being as though he is one of the biggest hitters in this safety class. He is a classic in the box safety that also gives teams a guy that can play center field if need be.

His hard hitting style of play hasn’t gone unnoticed by his peers. Alabama defensive back Ha-Ha Clinton Dix, the top rated safety in this draft class, referred to Pryor as a bigger hitter  in his press conference. It is no secret that Pryor is a physical player. He says that his physicality is one of the better aspects of this game. The success that the Seattle Seahawks have had as intimidators will make players like Pryor more valuable to NFL teams.

In today’s game you have to watch how you tackle people. No head to head collisions so I try to wrap up and use my shoulder pads. Delivering a big hit is all about mindset. It’s all about how you want to attack the guy.

The NFL has gone to more of a passing league and that has created a need for more defensive backs to be on the field. The safety position is looked upon as the quarterback of the defense. Their role has expanded greatly and they are required to do a lot more now. Pryor talked about this during our interview with him.

“The safety position is one where you have to do so much. You have to think and adjust other players on the defense. You have to come up and support the run and play coverage. It’s not like at corner where you can just think pass. You have to understand formations, motions and adjust to those things. Delivering a big hit is all about mindset. It’s all about how you want to attack the guy.”

Rest assured, Pryor will be one of the top two or three safeties selected in the 2014 NFL draft. He mentioned his game against Rutgers as the best example of how he plays. The toughness that Pryor has was instilled at a young age by his father. Pryor mentioned how he would fall when he was little. His father would tell him he’s ok, to get up, rub it off and keep moving.

Another thing that is evident when watching Pryor play and talking to him is that he loves the game. The way his eyes light up when he is talking about what it’s like to deliver a big hit shows that there’s a fire inside. Mike Mayock of NFL Network said that Pryor is one of his ten favorite players in this draft class. He spoke glowingly of how Pryor is a bigger version of former Indianapolis Colts safety Bob Sanders. Mayock said that Pryor is even better than Sanders in the box.

The future is very bright for Calvin Pryor. He is set to go to a team and make an immediate impact. There are many teams that are interested in this elite safety. Keep your eye on Pryor as draft day gets closer.