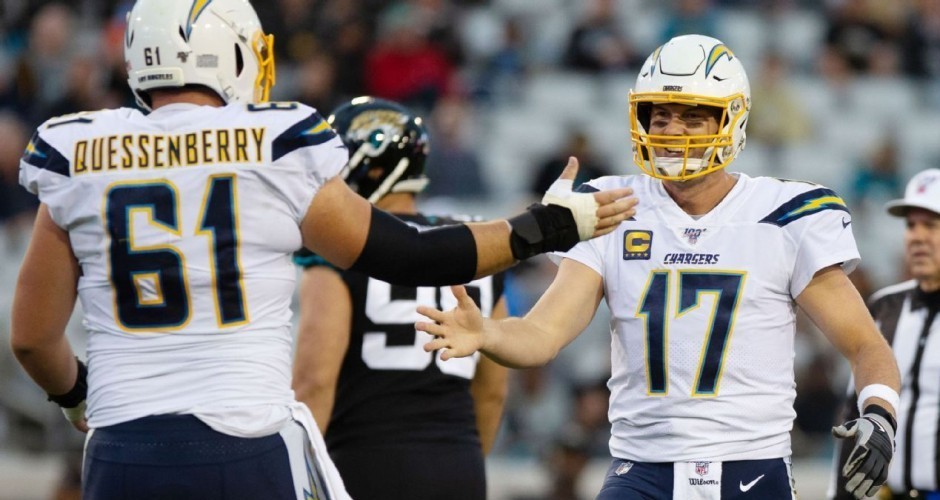 A matchup with the 4-8 Jacksonville Jaguars was exactly what the struggling Los Angeles Chargers needed. Losers of three straight, the Chargers were desperate to get back into the win column, and at the same time, celebrate the birthday of their longtime quarterback, Philip Rivers. The end result was a 45-10 trouncing of the Jaguars on Sunday afternoon.
Running back Austin Ekeler was dynamic out of the backfield, accounting for 213 total yards from scrimmage. Ekeler’s 101 yards on the ground and 112 yards through the air was the first time this season that a running back has ran for 100+ yards and also totaled 100+ receiving yards. Ekeler also caught one touchdown, an 84-yard screen from Rivers on the first possession of the second half that effectively put the game completely out of reach.
Rivers was an efficient 16 of 22 passing, for 314 yards and three touchdowns. For the first time in several games, Rivers did not throw an interception, largely in part to the fact that he was rarely touched by the Jaguars defense. In addition to the aforementioned Ekeler touchdown, Rivers connected on touchdowns with Hunter Henry and Mike Williams, respectively.
The Chargers defense was dominant against Jaguars rookie quarterback, Gardner Minshew II, and his patchwork offensive line. The Washington State product, Minshew, completed 24 passes for 167 yards, many of those for very minimal yardage. The Jaguars offense, through twelve games this season, had been predicated on the running game of Leonard Fournette. Today, the Chargers held Fournette to just 50 yards rushing. Equally impressive, they took away his catching ability out of the backfield. In each of his last two games, Fournette caught nine passes. Sunday, against the Chargers, he only caught three, largely in part to safety Derwin James tracking Fournette’s every move and anticipating the short pass.
While the Chargers are still undoubtedly out of playoff contention, they did somewhat right the ship. After all, this was a game they were supposed to win. Perhaps the only team struggling more over the last couple of weeks than the Chargers was these same Jaguars. Next weekend, the Chargers play host to the playoff-bound Minnesota Vikings, and we’ll see if the Chargers have indeed turned over a new leaf, or if this victory was merely an anomaly.