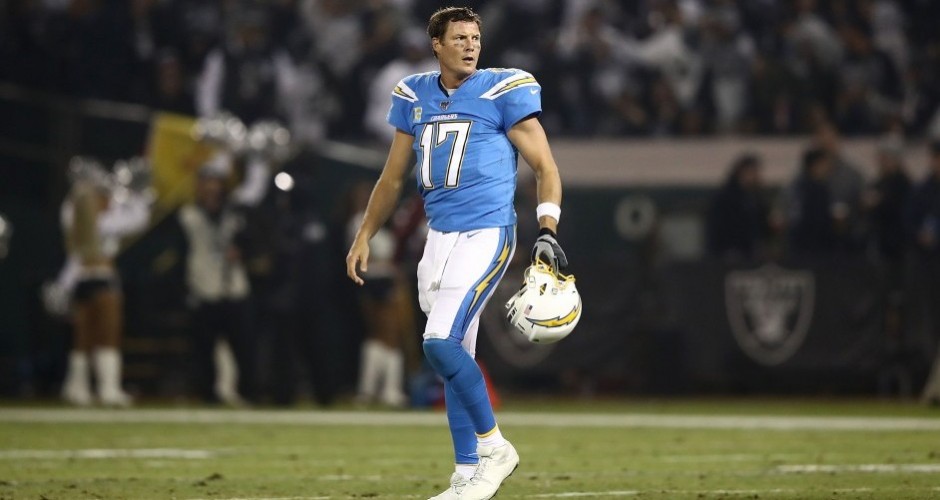 He’s not, nor has he ever, been in the same conversation as Tom Brady. He’s not even mentioned in the same breath as this season’s media darlings, Patrick Mahomes and Russell Wilson. And let’s face it, so far this season, he hasn’t even come within three touchdowns of Aaron Rodgers’ game high six touchdown passes, so he’s not going to be featured in an auto insurance commercial anytime soon. But Philip Rivers has always been the quintessential example of accuracy and consistency….that is until I decided to start him against the Raiders this week in my fantasy league, and it seemingly all went to hell. On Thursday night, Rivers was an uncharacteristic 17 for 31 passing, with 207 total yards and three interceptions. The Chargers would lose the game 26-24, an inter-division loss with huge postseason ramifications.
The Chargers’ first possession on Thursday night culminated with Rivers overthrowing wide receiver, Keenan Allen, and Raiders safety, Erik Harris, intercepting the football. The Raiders would ultimately tack on three points and jump out to an early lead. The very next possession, Erik Harris would again -inexplicably- intercept a Rivers pass, only this time he was able to find pay dirt on the return and stretch the lead to 10-0. It wouldn’t get any easier for Rivers, as he spent the majority of the game backpedaling and attempting to avoid defenders who broke through a patchwork offensive line (minus two starters) with little resistance.
Rivers was sacked five times on Thursday evening. Raiders rookie defensive ends, Clelin Ferrell and Maxx Crosby, would combine for three of those five sacks. Chargers tackle, Sam Tevi, was held out of Thursday’s game with a knee injury. Veteran left tackle, Russell Okung, would miss all but the Chargers’ first possession when he sustained a groin injury early on. Fill in’s Trey Pipkins and Trent Scott were overmatched on most – if not all – of the Charger’s offensive possessions by a young Raiders defense that seemed to be feeding off the energy of the Black Hole.
It wasn’t all sour grapes for the Chargers offense on Thursday night. Melvin Gordon, despite the sudden personnel change blocking in front of him, rushed 22 times for 108 yards and one touchdown on the ground. Inexplicably, however, sixteen of those attempts came in the first half as the Chargers largely abandoned the run game in the second half. The decision to ride the arm of a struggling Philip Rivers is one that new offensive coordinator, Shane Steichen, will be questioning for the foreseeable future, especially if the Chargers miss the postseason after giving away a very winnable game on Thursday night.
Did the short week play a role in the sixteen year vets’ dismal performance? Was missing two starters on the offensive side of the ball just too much to overcome? The Chargers, now 4-6 overall and sitting in third place in their division, have an extended amount of time to regroup as they prepare for the Chiefs’ high-powered offense in a Monday night matchup on November 18th.