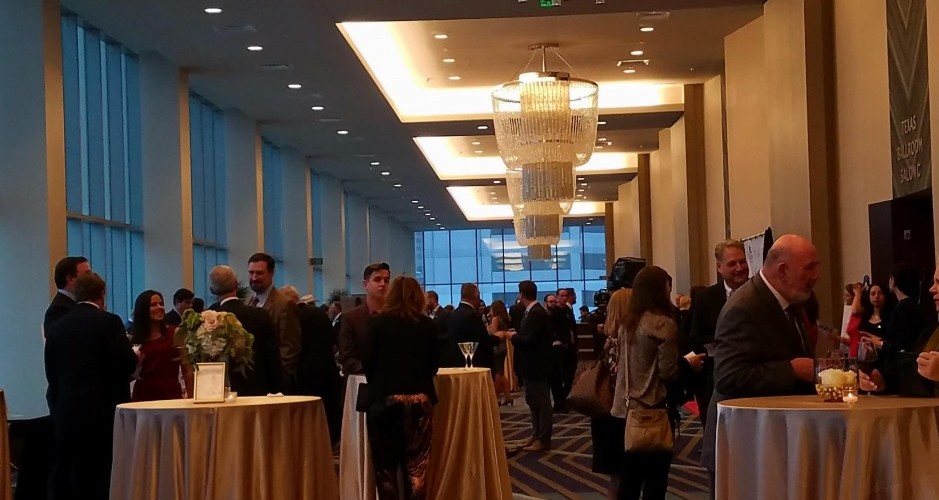 Rich Eisen was honored at the Legends for Charity Dinner with the 2017 Pat Summerall Award.  Eisen is the 12th recipient of the award named in honor of the late sports broadcaster whose own spirit of philanthropy is one of the values sought in the award recipients.  All proceeds from the Legends for Charity Dinner will benefit the St. Jude Children’s Research Hospital.

This year’s dinner was held in the elegant JW Marriott in Downtown Houston and hosted a silent auction as well as a live auction to generate proceeds.  The live auction alone, brought in more than $150,000.  Seven time Emmy Award winning sportscaster Joe Buck described the Thursday night Legends for Charity Dinner as the official kick off for the Super Bowl weekend.

In 2014, Eisen launched his daily talk show, The Rich Eisen Show on DIRECTV’s Audience Network and simulcast across the Premier Radio Network and For Sports Radio.  The Rich Eisen Show airs Monday-Friday from 12 Noon- 3:00 PM ET and allows Eisen to use his engaging blend of insightful football analysis, with an offbeat mix of humor and pop culture.  Eisen has also remained a part of the NFL Network where he was the first on-air talent hired shortly after the Network first launched in 2003.

Rich Eisen has earned money for St. Jude Children’s Research Hospital with his annual RunRichRun event.  Eisen began running the 40 at the NFL Scouting Combine in 2005 during what he referred to as sheer boredom.  He was sitting at the combine with Super Bowl 32 MVP Terrell Davis and staring into space when he asked Davis, “How fast do you think I can run the 40?” Davis laughed, so Eisen asked again.  This time Davis told him to stop, so, naturally, Eisen took to the field.  He shocked people when he ran it in 6.77 and like a fine wine, he has improved each year.  Yearly, Eisen dons his suit, tie, and cleats to RunRichRun for St. Jude Children’s Research Hospital.

NBC Sports broadcaster Mike Trico was emcee for the event, and played some star-studded tributes to Eisen– some tearful and some humorous.  Before the congratulations to Eisen, he happily shared the spotlight with some of the children from St. Jude.  Shon Coleman was a few months into his college football career at Auburn when he was diagnosed with acute lymphoblastic leukemia.   After two years of treatment he was able to make it back onto the field and then into the NFL draft.  He turned down the opportunity to attend the NFL draft and instead invited the NFL to his draft party at St. Jude Children’s Research Hospital.  He wanted to make sure the kids that were still fighting at St. Jude knew they could be anything they wanted to be.

If there was a dry eye left in the house, the story of Austin left a permanent impression on the heart of every attendee.  The 15-year-old boasts that he has been cancer free for nine years.  He also has plans– and the talent to be the sports broadcaster he dreams of being when he grows up.  When Austin was 2 years old, an MRI revealed a rare tumor on his spinal cord called an Oligo Astrocytoma.  He underwent a year of treatment before going to St. Jude, where he underwent surgery and more treatment.  Austin still returns for his yearly checkups, but his involvement with St. Jude’s Children’s Research Hospital has not stopped there.  Last year Austin had the opportunity to step into the shoes of a broadcaster and interview his favorite football player Peyton Manning at Super Bowl 50.

Austin was in attendance for the dinner and was given the opportunity to share a few words.  He wheeled himself onstage to a raucous standing ovation.  There are few things more powerful in this world that when a child receives a standing ovation.  Austin spoke and called both Eisen and Buck on stage where he interviewed them both.  Austin’s obvious natural abilities led Buck to officially predict that Austin would someday be the recipient of the Pat Summerall Award.

The immense sense of hope that was present in the room was inspiring and powerful.  I asked Austin what I could do to help him.  He replied, “anything from donating money to the hospital, to spreading the word about anything that involves St. Jude.  If they are hosting a walk, go ahead and participate. That’s perfect.”

Many came to the dinner to honor a great humanitarian, Rich Eisen, with the Pat Summerall Award, but much of the night was spent turning the hearts of people to St. Jude Children’s Research Hospital.  That was the greatest tribute that could have been paid to Rich Eisen, “I am humbled and honored tonight.  You all felt the bleeding heart that explodes out of the chest for children.  I hope you all felt the heart here with the donating tonight– that’s all I wanted from tonight.”

Click HERE to learn about other ways to give to St. Jude Children’s Research Hospital