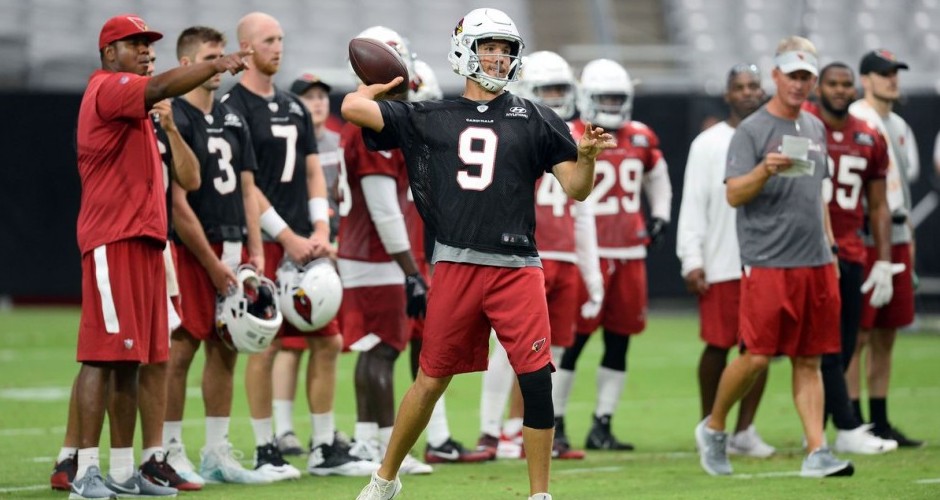 This weekend the Arizona Cardinals held their Red vs. White practice, an annual scrimmage pitting the offense versus the defense while also showcasing a bit of the special teams. Before heading inside, fans braved the 108-degree heat outside with the Bud Light Primetime Grill where a BBQ was held to aid fallen officer Tyler Edenhofer. Edenhofer was a 24-year-old Arizona DPS Trooper who was killed in the line of duty on July 25th, 2018. The BBQ was hosted by the Arizona Cardinals and the 100 Club of Arizona –a charity whose mission is to provide financial assistance to families of first responders who are seriously injured or killed in the line of duty and provide resources to enhance their safety and welfare.

After the BBQ, fans headed inside the University of Phoenix Stadium for the free event and some much needed air conditioning.  Approximately 20,000 fans were on hand to watch the scrimmage. Prior to kicking off the scrimmage, Cardinals President Michael Bidwill addressed the fans and honored the team’s 2017 Pro Bowl selections: Budda Baker, Chandler Jones, Patrick Peterson, and Larry Fitzgerald.

To start off (and end) practice, new Head Coach Steve Wilks had the Cardinals stretch as a team, something Bruce Arians shied away from as it cut in to his practice time. From there, 43-year-old kicker Phil Dawson practiced field goals where he wrapped up the kicking session with a boot from 55-yards out, showing fans that age aint nothin’ but a number! Punter, Andy Lee, skied a few punts to returners before giving way to the unmatched power of the jug machine.
When live play started a few things were clear:

One of the only unfortunate things to come out of the Red versus White practice was the loss of Center, A.Q. Shipley for the season. While Shipley has ranked in the bottom-half of centers for a few years now, he is dependable and is a leader in the locker room. The Cardinals must now turn to rookie third round draft pick, Mason Cole. If there is a silver lining to the loss, it’s that Cole comes in to the league as “seasoned” as a rookie can be. He was the first true freshman in history to start the season opener on a University of Michigan offensive line and remained a starter for every single game of his four-year career as a Wolverine. He will have more than a month to get acclimated with the starters before Arizona kicks off the regular season at home against the Washington Redskins.

The Cardinals first preseason game will take place on Saturday, August 11th at the University of Phoenix Stadium at 7pm. where they will take on the Los Angeles Chargers.