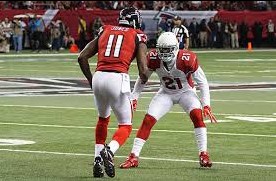 Camp is over, starters have been named, and it’s almost time to eat.  It can be argued that preseason games are meaningless, but if there are any that matter, none of them are quite as telling as the week three dress rehearsal.  For many teams, the starters will take little to no part in the final preseason game.  For teams like the Arizona Cardinals and the Atlanta Falcons, this week will be the last chance to prepare their wings for flight and their beaks for eating.  The Cardinals will soar to the newest nest in the NFL, Mercedes-Benz Stadium, to take on the Falcons in the first ever game inside the new $1.2 billion stadium.  The only thing more expensive than the stadium itself, are the superstars inside it.

The Cardinals will be up against a team that is likely more eager to get back to football than any other team in the NFL.  Anyone who turned on a television, or accessed the internet on the evening of February 5th, 2017 heard about what could be argued as one of the biggest collapses in sports history.  Correction:  the biggest collapse in sports history.  There is no argument.  While Cardinals fans have suffered for what feels like forever, including one of the most heart-breaking losses in Super Bowl history, they have never suffered with the likes of giving up a 28-3 lead with only a half to go.  At least not in the Super Bowl, that is.

Last week, Arizona’s starting inside linebackers Deone Bucannon and Karlos Dansby sat out with injuries and the Bears ran wild because of it.  With Bucannon already ruled out and Dansby questionable, things won’t get any easier this weekend against the defending NFC Champion Falcons.  Atlanta led the NFL in points per game last season (33.8), and they are bringing back every explosive piece of the offense this year.  Well, every explosive player that is.  With Offensive Coordinator, Kyle Shanahan, rushing off for the gold of San Francisco, it will be up to new OC, Steve Sarkisian, to help get Atlanta back to the Super Bowl, something only 14% of all Super Bowl losers have accomplished the following year.  When retaining offensive superstars such as Matt Ryan (QB) and Julio Jones (WR), one would assume the Falcons odds of returning to the Super Bowl in 2018 are a bit better than 14%.  However, their division rival the Carolina Panthers were in the Super Bowl just one year prior and the Tampa Bay Buccaneers seem to be poised to make a run.  A Super Bowl hangover wouldn’t be surprising.

It might be good for the confidence of young Arizona linebackers Scooby Wright III and Haason Reddick that the highest paid running back in the NFL, Devonta Freeman, has already been ruled out this Saturday.  If injuries to both middle linebackers wasn’t enough, Cardinals defensive tackle Robert Nkemdiche strained his calf in camp this week and will likely sit out the rest of preseason.  Cardinal’s cornerback Patrick Peterson may be chomping at the bit to face longtime foe, Julio, but Jones is questionable with an injury of his own and head coach, Dan Quinn, might not want to risk derailing the season before it ever gets started.

If there was an area Atlanta needed to improve, it was certainly on the defensive side of the ball.  Management addressed these concerns by signing free agent Dontari Poe (DT) and drafting UCLA Bruin, Takkarist McKinley (DE), to form a three-headed-monster with Vic Beasley, Jr.  The Falcons hope “Vic-Tak-Poe” will be able to slow offenses down enough to prevent them from overcoming a 25-point deficit with just a half of football to go.  Should Atlanta come out flat, Arizona will quickly remind them that they are no slouch when it comes to lighting up the scoreboard themselves.  Ranked sixth in scoring last year, a healthy Carson Palmer and company will look to air raid a defense that gave up the fifth most passing yards in 2016-17.  Should Atlanta’s pass rush create too much chaos for the Red Birds, they’ll look to superstar running back, David Johnson, to lead the way against a team that also ranked among the lower half of rush defense in 2016.

With expectations for both teams to be successful high, this game will be a great test headed in to the regular season.  The final score in a preseason game usually matters little, but with it being the first ever game played in the Mercedes-Benz Stadium, you can expect both teams to try and come away with a victory.  Kickoff is scheduled for Saturday, August 26th, 2017 at 7pm (ET).