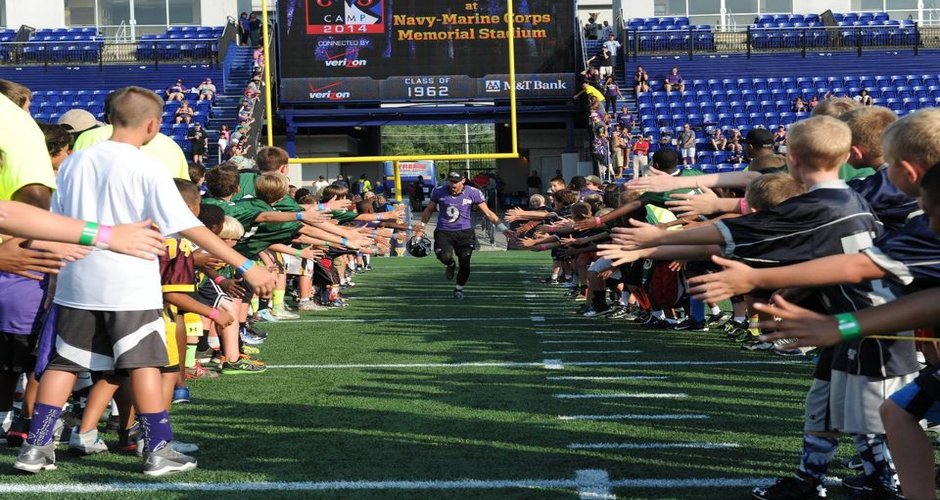 The Ravens have made it a priority to hold practices in different parts of Maryland because it helps to connect with fans. This is the third straight season that the Ravens practice has been held at the Naval Academy. Holding a practice there is of particular relevance to Ravens owner Steve Bisciotti because he grew up nearby in Severna Park, Maryland.

John Harbaugh always likes to have open practices because he likes the option of having fans that many not normally get to see his team live because of the expensive price of tickets to games. Harbaugh does a lot of things to connect with the military as well, so his appreciation for this event is very high.

“We have great fans here. I think it’s good for our guys to get away and what better place than the Naval Academy? It’s a monument. It says a lot about who we are as a nation right? It’s kind of cool to come here for that reason also.”

Harbaugh continued: “We are going to be playing night games here through the preseason and during the regular season, so it gives us a chance to prepare for that. It was a less physical practice tonight because we have two very physical practices over the weekend. We will have a chance to recover over the next day or two then  we’ll be doing all our San Francisco preparations over the next couple of days and then then we’ll play Thursday night. That’s where we’re at. We’re excited to start playing some games.”

Joe Flacco shares the same sentiment as his head coach when it comes to open practices.

It’s always different because you get that sense of the fans. It’s nice to get a feel for how much people enjoy coming out and watching us play, practice, whatever it is. It’s a pretty normal practice for us. We don’t anything differently to put any kind of show on but the fans make it a little bit more fun.

The fans were treated to a surgeon like performance by rookie quarterback Keith Wenning. He caught fire towards the end of 7 on 7 when he completed five straight passes. His first was a well-placed throw to Jeremy Butler on a deep comeback route. Next, he hit Jace Davis on a drive route across the middle. The next three completions where downfield passes, one of which was a 60 yard touchdown throw to Deonte Thompson.

Wenning had perfect ball placement on the deep throws. He threw a perfect drop shot to Jace Davis on a corner route just before he stepped out of bounds. He also showed great anticipation by throwing to a spot before Jeremy Butler made his break back to the ball on the deep comeback that started his streak of 11 consecutive completions.

Harbaugh was very impressed with Wenning on Monday. Keith was on fire during the third down drill. It wasn’t just converting first downs, it was throwing touchdown passes. That’s a good thing. He did a nice job of driving the team down there at the end in the two minute drill. He’s doing a heck of a job.

The Ravens wide receivers looked very good during practice. Jeremy Butler got to work more out of the slot which is where he did most of his damage when he was in college. Kamar Aikens continued to shine and worked with the first and second team offense. Deonta Thompson had a very good practice as well He was able to make a few plays downfield. LaQuan Williams had a couple of nice deep receptions as well. Torrey Smith had some productive reps against Jimmy Smith in one on ones and during team periods. The same can be said for Steve Smith Sr.

The new offense that Gary Kubiak brings to the Ravens features a zone blocking scheme. The running backs are definitely motivated because of this opportunity to improve on last year’s dismal rushing numbers. While a lot of attention has been given to Ray Rice off the field, Harbaugh has been focused on the actual play of his veteran running back.

“Ray has looked really good. He’s in tremendous shape. I’m seeing him make a good lateral cut. He has really good burst, acceleration is there and vision is there. He’s been very patient with the zone runs, which is something that I believe to be an improvement over the past few years. He’s catching the ball well and his pass protection has been very good. Ray looks really good.”

The San Francisco 49ers will come to Baltimore and kickoff the preseason game schedule on Thursday. After that, the two teams will go through two days of practice on Saturday and Sunday. This is something that both teams are looking forward to.