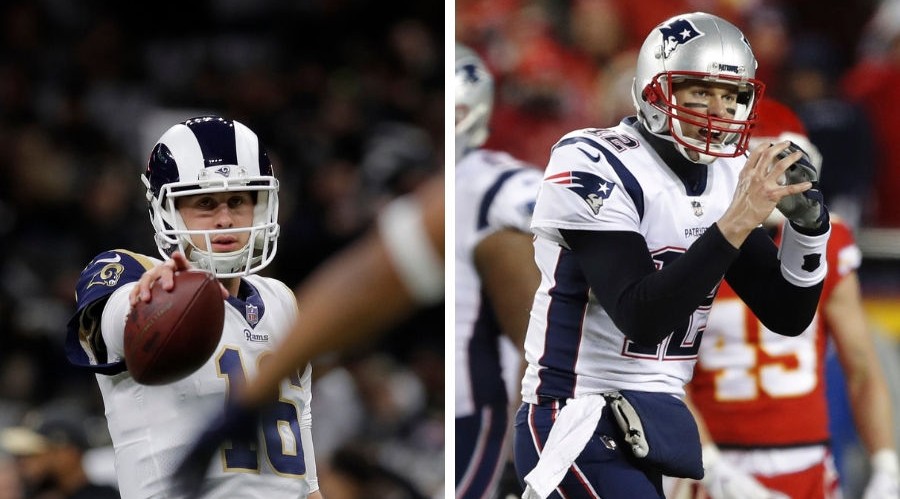 The Patriots and Rams match up in the 53rd Super Bowl, and in matching up, you get one of the best coaches all-time going up against one member of the young guard of head coaches in the NFL. Not only do these two differ in their coaches ages, they also differ in Super Bowl experience.

To the Patriots, going to the Super Bowl isn’t something that just happens, but it is an expectation. This time in the Super Bowl marks the eleventh time in the Super Bowl for the franchise. Back when they got their the first time though, it wasn’t known this was coming. In their first two visits, the Super Bowl wasn’t kind to the Patriots, getting blown out by the Monsters of the Midway Chicago Bears 46-10 in 1985 and the getting beat another time in 1998 by the Green Bay Packers 35-21. The losing streak of two was there, but with Tom Brady pairing with Bill Belichick in the 2001 season, Patriots history was about to be re-written. The first of Brady’s titles would come in 2002, when the Patriots would beat the St. Louis Rams 20-17. From there the Brady/ Belichick connection would win two more Super Bowls, which were back-to-back in 2004 and 2005 against the Carolina Panthers (32-29) and Philadelphia Eagles (24-21) before tasting defeat in two straight Super Bowl appearances to the Giants in 2007 (17-14) and 2011 (21-17). Since the losses to the Patriots, the Brady/Belichick connection has won two more Super Bowls (28-24 against the Seattle Seahawks and 34-28 against the Atlanta Falcons) and lost one to the Eagles 41-33, which was last year in Minneapolis.

The experience the Patriots come in with this season is huge for them. For the most part, all of their team has been in the Super Bowl at least once, so the break of routine won’t bother them much. As far as Brady and Belichick, the future Hall of Fame duo have gone 5-3 together and look to build upon their legacy at the Rams expense. The Rams, on the other hand, don’t have that spectacularly historic pairing like the Patriots do, but they do have their own bit of Super Bowl magic as well. As many know, the most Super Bowl history the Rams have the most is in a city where they don’t even play anymore. The Rams made two of their three appearances in the city where the Arch lie, winning one in exciting fashion against the Tennessee Titans in 2000 and losing in 2002 against the New England Patriots 20-17. The other appearance came all the way back in 1980. The Rams were in Los Angeles at this time still and happened to lose to the Pittsburgh Steelers that day. The Rams may have taken a while, but they moved back to Los Angeles and now are one of the premiere teams in the NFL again. And with the young pairing of Sean McVay and quarterback Jared Goff, the Rams are looking to win their first championship in Los Angeles.

Experience versus excitement is the choice in Atlanta on Sunday and it will be interesting to see which one wins out. Last time excitement ruled out with the Eagles versus the Patriots but we all know the Patriots are hungry to avenge last year’s title game loss. We shall see what happens.