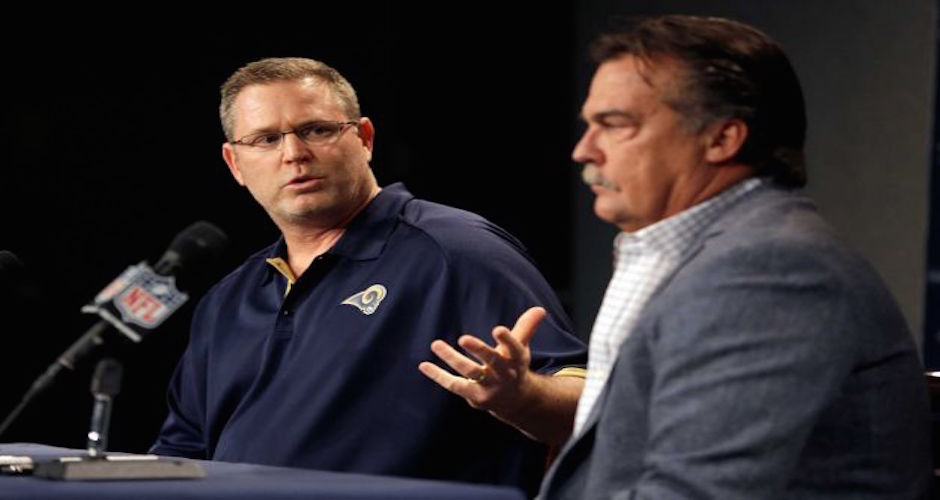 Jeff Fisher and the St. Louis Rams introduced their former quarterbacks coach Frank Cignetti as their offensive coordinator Friday, February 13. The primary function of the press conference was to gain insight on how Cignetti’s past as a play caller will mesh with the Rams’ incumbent talent, and how the team will achieve continuity despite the change at offensive coordinator.

“[Brian] Schottenheimer was moving on, there was no doubt in my mind that I had his replacement on the staff. …Continuity, stability is very, very important to me and to the organization. Continuity, stability, same system for [quarterback] Sam [Bradford], same system for the rest of his teammates was very, very important and it was about how we get better. How we become more productive.”

Obviously Fisher chose Cignetti for his familiarity with the current offense and the players but there were other qualities Cignetti possessed that impressed Fisher as well. Fisher said,

“He’s done a great job with the quarterbacks. I’m with him every day. We’re on the field, watch him interact. In particular, it’s his leadership skills. …His flexibility, his ability to adjust and I have no concern whatsoever about his play calling ability because he’s called plays before.”

Cignetti was also asked how he intends to utilize current weapons on his roster. Tavon Austin is a player that has underachieved since arriving in the NFL, but it

certainly isn’t because he lacks talent. Austin had his best season as a rookie when he posted 418 yards and four touchdowns on 40 receptions. In 2014, Austin totaled 224 yards rushing as he averaged 6.2 yards per carry. Austin has a unique skill set that could carry the Rams to more wins in the vaunted NFC West; but the must find a way to utilize him better than they have in the past. When asked about Austin, Cignetti said,

“…Tavon Austin is an outstanding football player. I saw him here this week, [I’m] fired up to get working with him. As Coach [Fisher] and I sat down, ‘Hey, you think players, not plays,’ especially in tough situations. Tavon Austin’s a playmaker.”

The talented yet injury riddled Sam Bradford was widely discussed during Cignetti’s press conference. Fisher was asked whether or not the Rams would’ve gone through with hiring Cignetti if Bradford would’ve objected. Fisher was very candid in his response saying,

While the coaching search was completed with Bradford in mind, the Rams front office will entertain acquiring new talent at the quarterback position. Fisher said,

The Rams coaching staff is looking for an insurance policy to back up Bradford but they clearly intend to move forward with him as long as he’s healthy. Cignetti said,

“We’re looking forward to Sam moving forward. He’s doing a great job in his rehabilitation. When you go back last year, he had an outstanding offseason.  He had a great training camp. Unfortunately, in Cleveland he got injured. Moving forward, getting Sam back healthy will greatly increase our chances of winning.”

The Rams certainly have the talent on both sides of the ball to become a perennial playoff team. However, they will need to score points with greater consistency than they did in 2014. Cignetti has his work cut out for him as the Rams finished 28th in total offense last season. If Bradford can stay healthy and Cignetti can find a way to enhance Austin’s production, they should have a far better 2015 season on the offensive side of the ball.