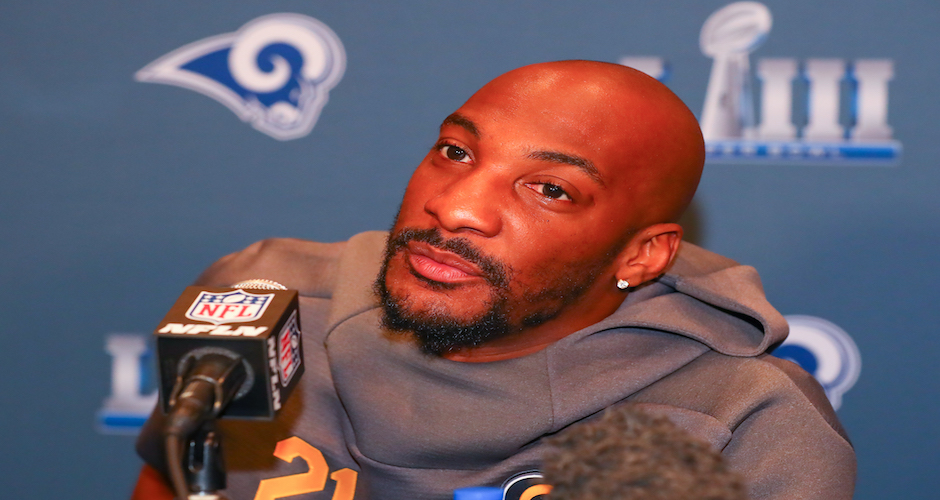 After coming short of the Super Bowl last year, the Los Angeles Rams made big moves in free agency to fill some voids they were hoping would get them over the hump in the 2018-19 season. That methodology seemed to work with the Rams now a game away from possibly receiving the Lombardy trophy.

Two key acquisitions for the Rams in the offseason to round out their backfield included former Denver Broncos cornerback Aqib Talib and former Kansas City Chiefs cornerback Marcus Peters.

Talib and Peters faced some injuries this season that slowed them down. However, both Pro-Bowlers (five for Talib and three for Peters) are expected to be a huge part of the Rams’ game plan going into Sunday.

Patriots coach Bill Belechick spoke to how lethal and disruptive the duo can be. He’ll be paying special attention to them on gameday.

“(Talib’s) a very talented player. Peters is on the other side,” said Belichick in a press conference with media leading up to Super Bowl week. “I mean, they have two great corners that can match up, really, against any receiver — big, fast, quick, savvy. Those guys can cover anybody. They’re both very good with their ball skills. As we know, Talib’s got great hands, makes some tough catches. If you make a mistake around him, it’s not an incompletion. It could be going the other way. So, he’s a very instinctive guy, as is Peters, and they recognize routes, combinations. They have a real good feel for the pass rush, they know when the quarterbacks can’t hold the ball and they’re on their guys. So, they’re two great corners and again, guys that they don’t just cover their guy. I mean, you’ve got to worry about them not just intercepting the ball — you’ve got to worry about them intercepting and running back for a touchdown, too.”

In addition to their individual talents, Peters and Talib are learning from each other which is only making them an even stronger duo to face.

“Its been dope,” said Peters about playing alongside Talib. “I think I’ve been getting some critical information that I’ve been needing with him having so much experience in the league. Its been fun.”

Covering the #Rams this year. Talked to Marcus Peters about his relationship with Aqib Talib and his thoughts on making it to Super Bowl after so many tries with Kansas City. @PlayerInsiders #SuperBowlLIII pic.twitter.com/fLJSI9B8rP

“I learned a lot playing alongside him too man,” said Talib. He’s got 30 interceptions or something crazy. He sees the game a certain way, you know. For me to pick his brain and see the game like he sees the game has been good for me.”

Their strong bond began shining through in training camp. As they have moved their way through the season, the mutual respect has only grown. Now that they are both healthy and back in the lineup together, they are putting the past behind them and looking forward to taking care of business against the Patriots.