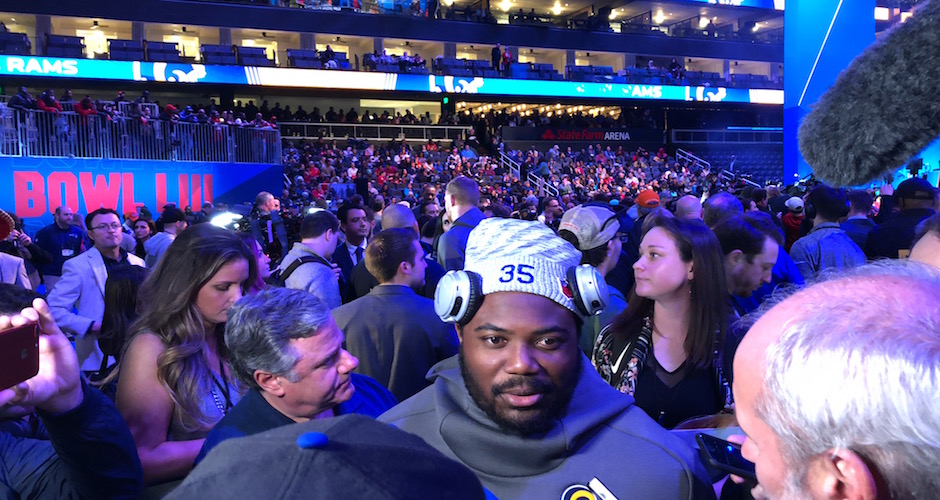 The week leading up to Super Bowl can be fun yet overwhelming for the teams involved. Similar to every year, the Los Angeles Rams and New England Patriots have been met with daily media obligations, interviews, and a slew of activities to celebrate their accomplishment of being the last teams standing. For the Los Angeles Rams, their preparation prior to heading to Atlanta has them in the ‘right place’ to stay focused this week.

“Just between our meetings and the focus we had last week, we’re in the right place,” said Ndamukong Suh. “We obviously have a lot of things we have to accomplish as a team from A to Z while we’re out here but as we get into tomorrow and the rest of the week, I have no doubt we’ll be focused and ready for Sunday.”

Ndamukong Suh on his journey from #Detroit to #Miami to Super Bowl: “I’m proud of everything I went through.” Also got his take on the team focusing this week: We’re ready for Sunday.” @NdamukongSuh @PlayerInsiders #Rams pic.twitter.com/eSQFNaQD3c

In addition to their preparation last week, Rams Coach Sean McVay provided the team with sound advice about dealing with the frenzy of Super Bowl week. For the most part, he encouraged his team to be comfortable and be themselves.

“We have a lot of media and stuff throughout the week but other than that, McVay always says be yourself, allow yourself to be at home, be comfortable, have fun, dance, and joke around. I think that’s the biggest thing. Be comfortable. There’s a lot going on this week with media, practice, and walkthroughs. But like McVay says, be comfortable and be yourself.”

Asked #Rams wide receiver @robertwoods how the team is staying focused this week amongst all their obligations. He said Coach McVay told them to “just have fun and be themselves.” #SBLIII pic.twitter.com/gQMiSEvP49

If anyone knows how important it is to be yourself, it’s running back C.J. Anderson. Staying true to himself has been key to his journey in the NFL and now at the Super Bowl. He has no doubt that the team will be focused and ready for Sunday despite the obligations this week. He also believes their experience in the NFC Championship has prepared them for this moment.

“Everything we did the week before puts it in perspective,” said Anderson. “Our guys and our teammates did a hell of a job this week and last week preparing like they were playing on Sunday. We’re ready to go.”