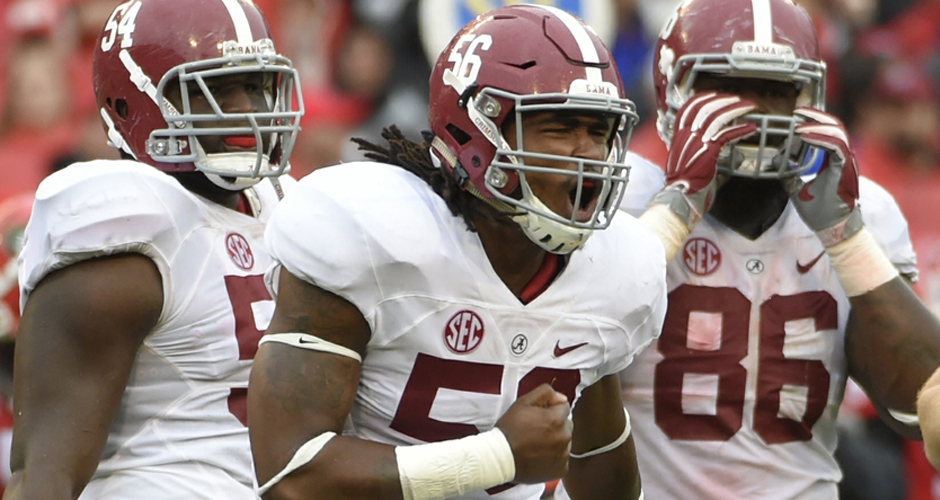 The 2016 NFL Draft was just a few weeks ago but we have taken the last few weeks to watch some film for next year’s draft and we have our very early projection of the top 100 seniors.

Alabama leads all schools with six in our top 100. LSU, Michigan, Ole Miss, and North Carolina all have five each in the top 100 while Clemson, Arkansas, Louisville, Michigan State have four each, respectively.

Our initial board is dominated by Alabama with 3 players among the top 5 seniors and the top rated player in linebacker Tim Williams.

The highest rated senior quarterback is Chad Kelly of Ole Miss at 39.

Small schoolers always vault into the top 100 seniors during the fall and we believe there are a few who will find themselves among the top 100 drafted. Our top rated small schoolers are Eastern Washington receiver Cooper Kupp (No. 44), Tennessee State tackle Jessamen Dunker (No. 88), and Bucknell tackle Julie’n Davenport (No. 88), and Villanova defensive end Tanoh Kpassagnon (No. 98).

Keep in mind that players will drop from 5 to perhaps 25 or more spots when underclassmen are included. We have put round projections for readers to keep in mind just how far these players would drop if we indeed included underclassmen.