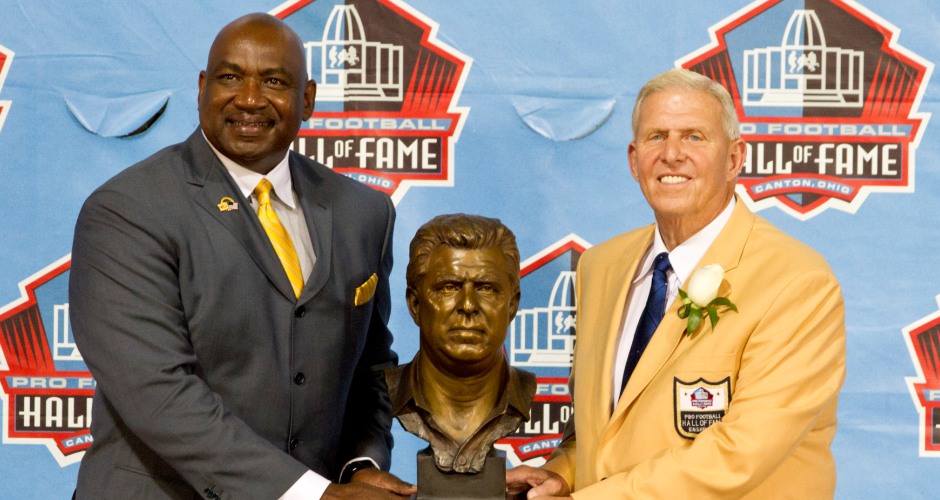 The Pro Football Hall of Fame is home to the greatest football players ever to play the game, and they all have taken different paths to get there. There are players from every different position on the field and players from every different walk of life off of the field. What makes the Hall of Fame Enshrinement Ceremony so special and unique is that every year, every player is going to stand up in his gold jacket and tell a story you have never heard before. Some stories are lighthearted and fun while others are awe-inspiring, but no matter the type of story you can always count on one thing in each and every player’s speech. “Thank you, Coach.”

Bill Parcells is the only coach in the Hall of Fame Class of 2013, and only the 22nd coach ever to be inducted into the Hall of Fame. Head coaches account for less than ten percent of the total number of members in the Hall, so joining legendary coaches like Lombardi, Shula and Stram is an extremely prestigious opportunity.

Duane “Bill” Parcells was born in Englewood, New Jersey where he attended high school and excelled in sports. Parcells was three-sport athlete in high school where he played football, basketball and baseball. After a short time attending Colgate University Parcells transferred to the University of Wichita (now Wichita State) to earn a physical education degree. He would end up being an assistant coach for the University of Wichita and eventually progressed his way up to his first head coaching position at the Air Force Academy. After a short time as head coach at the Academy, Parcells bounced around jobs with the New England Patriots and New York Giants.

In 1983 Bill Parcells finally landed a head coaching position with the New York Giants. After just having one winning season in the ten years prior to hiring Parcells, the New York Giants went to the playoffs in just his second season with the team. Parcells would eventually lead them to a Super Bowl XXI Victory in 1986.The Giants would return to the Super Bowl again in 1990, where they battled for a hard fought 20-19 victory over the Buffalo Bills. After leaving football for two years Parcells came back to coach the New England Patriots and eventually lead them to Super Bowl XXXI.

Parcells also coached the New York Jets from 1997-1999 and the Dallas Cowboys from 2003-2006. In his 19 seasons as head coach in the NFL Parcells accumulated an overall record of 172-130-1 and a winning record of 11-8 in the playoffs. With two Super Bowl Victories under his name, Bill Parcells will be along side the greats to ever coach the game.

Becoming a head coach in the NFL is an extremely difficult task to achieve because of the limited job market. Only 32 positions are available and only a fraction of those 32 are hiring every year, and once you get hired as a head coach you have an even more difficult task ahead, winning. It takes quite a bit to put together a team that can win games in the NFL, just ask the 76’ Buccaneers or the 08’ Detroit Lions, who didn’t win one game all season. However, winning and losing in the NFL isn’t based solely on talent. It’s determined by how well a coach and his team can bond together towards one ultimate goal.

“That’s what this game is about, camaraderie,” said Parcells. “There would be nothing without that.”

This story is sponsored by EarQ EarQ’s professional hearing healthcare providers are patient-focused, committed to improving your hearing and enriching the quality of your life.

For more of our stories on the Hall of Fame Class of 2013 see below: