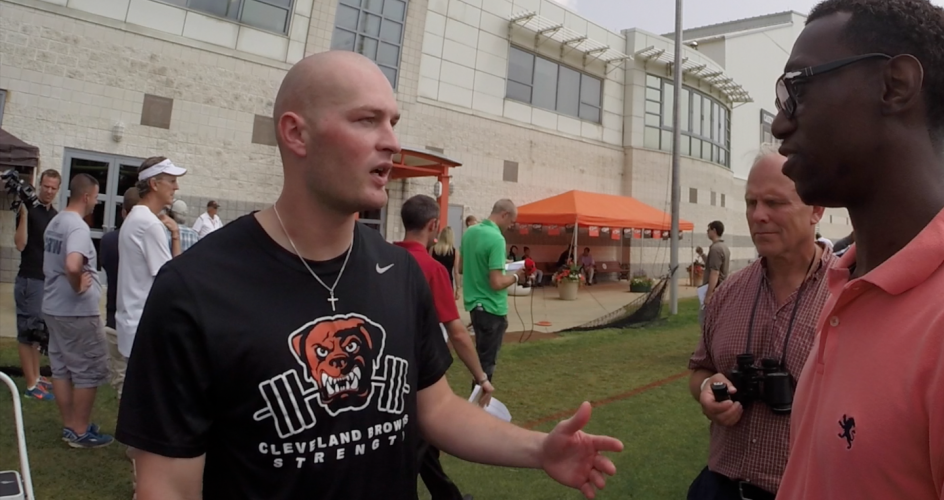 Connor Shaw comes from a sports oriented family, and remnants of Shaw’s childhood still permeate his personality in the form of competitiveness today. Shaw attributes his work ethic and competitive nature to his upbringing and rightfully so.

Shaw’s mother (Dawn Shaw) was a former basketball player at North Georgia University; his father (Lee Shaw) played football at West Carolina, and is a high school football coach in the state of Georgia, and his brother (Jaybo Shaw) once earned a football scholarship to play quarterback Georgia Tech. Jaybo would finish his football career at Georgia Southern.

Shaw’s immediate family’s success in the realm of athletics pushed him to seek ways to improve in every sport he tried. Shaw showed early signs that he possessed the aptitude necessary to further his family’s legacy. Proving himself capable in both baseball and basketball, Shaw would soon begin to hone his skills in the game of football.

Shaw began receiving offers from major colleges across the nation, and subsequently committed to South Carolina because of his affinity for head coach Steve Spurrier.

Shaw overcame multiple injuries during his time at South Carolina and still managed to rewrite the school’s record book. Shaw threw for 5,762 yards, and 1,636 yards rushing in his collegiate career. He became South Carolina’s all-time completion rate percentage leader at 64.7%. He also became the only player in program history to record 1,ooo yards rushing and at least 5,000 passing.

In his final season with the Gamecocks, Shaw amassed an astounding 24 touchdowns through the air with just one interception. He would also finish his career as the winningest quarterback in South Carolina history with a record of 26-5.

Shaw (6-0, 209) closed out his South Carolina career by throwing an astonishing 24 touchdowns and just one interception. He also left as the winningest quarterback in Gamecocks annals, going 27-5, including 17-0 at home.

Prior to the draft, Spurrier said,

“He became a starter three years ago, and he’s been the quarterback on all three of these 11-win seasons. Connor’s just a winner. He’s a lot like Russell Wilson. He takes care of the ball, doesn’t do stupid stuff, doesn’t take careless sacks, he can throw it away, and he’s really a good passer. Any time you see a guy who can run as well as Connor, you don’t think he’s that good of a passer. I hope he’s a mid-round pick, maybe even better. The kid is a winner, he can run with it and he can throw.”

Unfortunately, Shaw never became a mid-round pick; in fact he went undrafted. Despite outperforming his now teammate in many of the drills at the NFL

Scouting Combine, and putting up statistics similar to Manziel the past two years, NFL teams did not deem him to be worthy of a draft pick. With that said, the Cleveland Browns are certainly excited to have him on their roster.

Pro Player Insiders had the opportunity to catch up with Browns’ quarterback Connor Shaw after practice. Among items discussed in the below video, Connor Shaw shed light on why he chose to come to Cleveland.

Howard: “As far as your greatest strength as a player, what would you say that is?”

Shaw: “Probably decision making. I don’t turn the ball over, I’m very decisive and I see myself as a pretty smart player.”

Howard: “And your weakness? What are the things you’re working on so you can make sure you lock up one of these roster spots?”

Shaw: “Probably pocket presence a little bit. I kind of scramble around a little bit too much. I did better in my senior year of college but it’s something I can still work on, especially at this level.”

Howard: “Coming into the NFL, at South Carolina you were rated statistically just below Johnny Manziel, No.2 in the SEC in a lot of statistical categories, then all of a sudden you’re an undrafted free agent. How does that happen, and why do you think that happened?”

Shaw: “I firmly believe that everything happens for a reason. This situation and the group of guys that I’m playing with — Johnny, competing with him, it’s a lot of fun. I really would not want to be anywhere else. Of course I wanted to be drafted, but once I’m here, we all have to prove it on the field, and I’m really happy where I’m at.”

Howard: “And why the Cleveland Browns?”

Shaw: “Ah man It’s the same thing at South Carolina, the fan base is starving for success and very loyal and dedicated to this team, and I want to be one of the guys that kinda be the first to set the foundation. I think the coaching staff has done a lot of good job, moves whatever in the offseason they put this together so I’m excited about it.”

Shaw: “Thanks, appreciate it.”