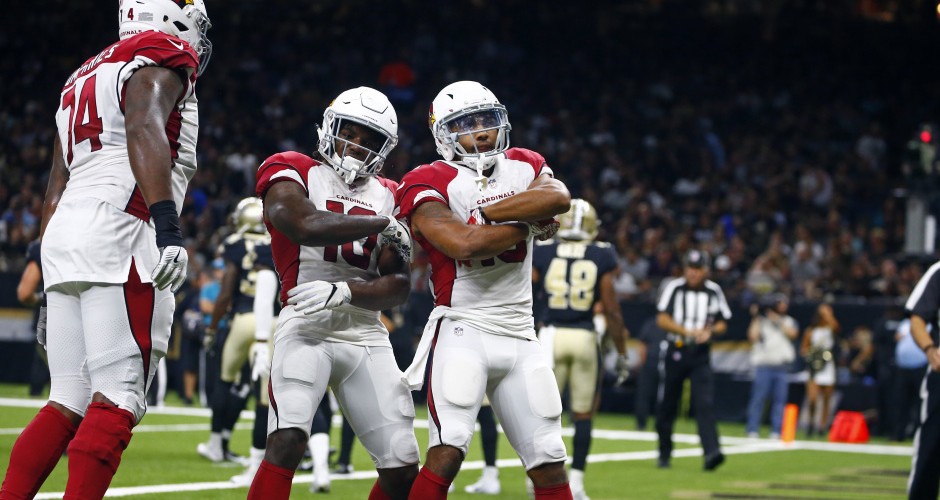 The Cardinals started off Saturday’s game in New Orleans as if they were hungover after a long night on Bourbon Street. The first two drives on both sides of the ball were anything but impressive. Sure, in those first two drives Arizona came away with two takeaways, but in actuality the turnovers could have been classified more as giveaways from the Saints than takeaways by the Cardinals –and Drew Brees didn’t even play. Prior to the turnovers on both drives, the Cardinals defense was being gashed repeatedly by the Saints run game. Blame it on preseason or one of the many side effects of having to be the away team in the Superdome, but the starters seemed to be standing and waiting for the running backs to come to them.

The first two offensive drives started off just as poorly for the visiting team. False starts and poor blocking led to back-to-back three-and-outs for the Cards offense. However, things seemed to change on both sides of the ball during the third drive. The Cardinals D swarmed the Brees-less offense causing a three-and-out. From there Sam Bradford drove the Birds right up the field resulting in a nine-yard touchdown run by David Johnson. The run looked as though David was going to fall a few yards short of the endzone, but with a little help from his friends (O-line), Johnson refused to be denied. The drive would also be Bradford’s last, allowing him to finish 6-6 for 61 yards – all six completions went to different receivers. Bradford only threw one pass in week one of the preseason, but he has yet to have an incompletion in 2018.

Cornerback, Bene Benwikere, making a strong push to start opposite Patrick Peterson, made a phenomenal toe-tapping interception ending the Saints fourth drive and allowing Cardinals rookie quarterback Josh Rosen to come in and get time with the starters.

With a center capable of successfully snapping the ball, Rosen looked everything like the QB of the future the Cardinals have been so desperately searching for. The rook went 10-16 for 107 yards that included 13-yard dart for a touchdown to fellow rookie receiver, Christian Kirk. Kirk finished the game with four receptions for 49 yards and the touchdown. Second year receiver ,Chad Williams, also had a solid performance catching three of his four targets for 44 yards.

Cardinals fans were once again forced to watch Robert Nkemdiche go down with an injury (foot) and will wait for more information in the coming week. Nkemdiche has yet to make a significant impact on defense in a regular season game but is expected to play a key role in the 4-3 defense new Head Coach, Steve Wilks, has implemented.

Overall, the offensive line looked great, the quarterbacks looked great, and the receivers looked great. The running backs and defense will once again be nothing to worry about. Final score: 20-15, Cardinals win. The 5.5 projected wins in the Vegas sportsbooks almost looks like free money, even in the stacked NFC West.