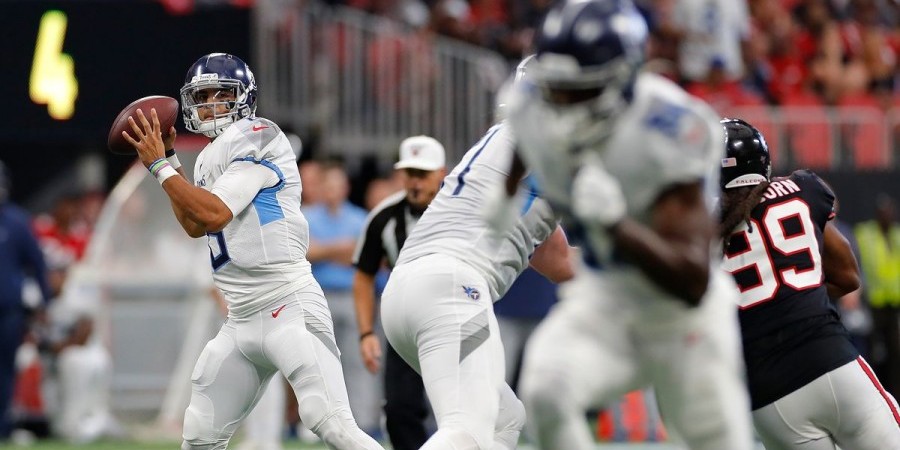 Titans fans were not very high on their team following their bad loss on national television to the Jaguars, but the win against the Falcons has restored some faith in the fanbase and now they head home to take on the Buffalo Bills. The Bills tasted defeat for the first time against the New England Patriots last Sunday, and in doing so, they lost their starting quarterback, Josh Allen, to a head injury. Whether Allen plays or not is up in the air, but what is key is can the Tennessee Titans keep up the momentum and the intensity they played with on both sides of ball? We shall see if they can along with seeing if they can do these six things to help them win on Sunday.

1) Be aggressive and assertive

The Titans offense looked lively and alert this past Sunday versus Atlanta. Although Buffalo is a tougher defense, the Titans need to bring that same type of intensity on the offensive side of the ball. An assertive Marcus Mariota is a good quarterback, and if wide receivers Corey Davis and AJ Brown play with a chip on their shoulder like they did last week, the offense could give Buffalo some problems. Of course, some of the aggressiveness will depend on the gameplan and Arthur Smith has to come out swinging in this game too.

Let’s be honest. The return of Taylor Lewan isn’t going to cure everything for the Titans offensive line, but his addition back to the lineup will make the Titans a little stronger up front. With him there, things could get a little easier for Derrick Henry to run. Henry has averaged under four yards per carry the last two weeks. The veteran combination of Lewan and Roger Saffold could be huge in controlling the clock and putting points on the board. That combination could also help Henry break off some big runs.

The Titans won last week versus Atlanta with tight end Delanie Walker only having one reception for four yards. The fact that this happened is unreal because the Titans usually don’t fare well when Delanie doesn’t perform. Look for Tennessee to get him involved quickly in this game. He is a mismatch many of the times he is on the field and has been the Titans most consistent offensive weapon in the passing game for a while.

The Tennessee Titans drafted Harold Landry III with the thought he could be a guy who brought consistent pressure. Last week, he brought that pressure with two sacks. This week, the Titans are hoping to see some of that same performance from Landry III. Having someone consistently pressure the quarterback is the only thing the Titans have been missing on an otherwise outstanding defense. The more heat Landry III brings, the easier things will be for the defense as a whole.

The Buffalo Bills are not exactly world-beaters offensively, but what they do have is a really good running game. They rank fourth in the NFL right now at 147.3 yards per game rushing. The Titans must limit their yardage in the running game. In doing that, they will make the Bills have to beat them in the passing game and that is something they have not proven they can do yet.

The Buffalo Bills offense isn’t very imposing and they also turn the ball over. The Bills currently are -2 when it comes to turnover differential, giving the ball up more than they get the ball back on turnovers. If Josh Allen plays or if Matt Barkley steps in for him at quarterback, both are susceptible to turning the ball over. The Titans must take advantage when those opportunity presents itself.

Everyone in the AFC South sits at 2-2, so in this tightly contested division, every win counts. Facing the Bills will not be easy, but this is a game the Titans can win. Saying they can win it and having them actually do so are two separate things though. It will be interesting to see if the Titans can build off last week’s win.