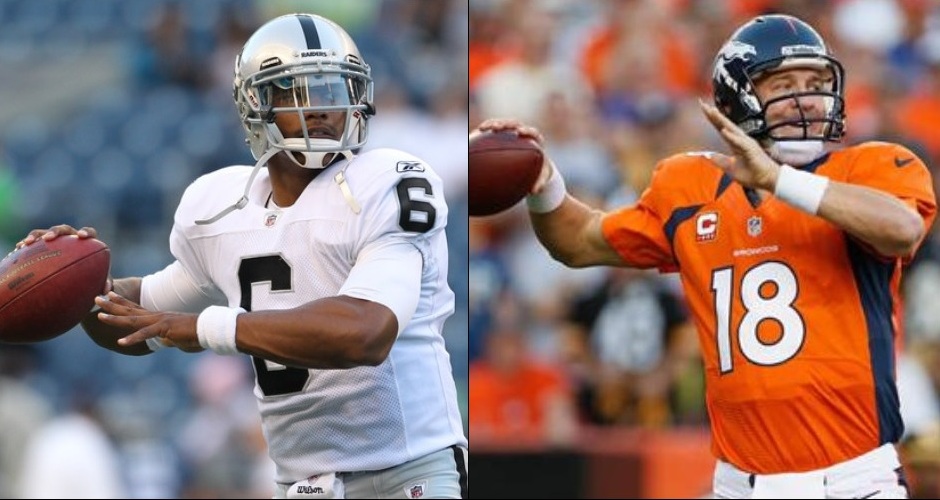 The Broncos took care of business on both sides of the ball last night as they clubbed the Oakland Raiders 37-21 at home to run their record to 3-0. Peyton Manning (32 of 37 for 374 yards, 3 touchdown passes, and zero thefts) and the Broncos balanced offense jumped on the Raiders defense early and often en route to 536 yards total offense and 4 scores.

It may be early, but the Broncos are definitely a Super Bowl caliber team. And just wait until star linebacker Von Miller gets back in 27 days when the Broncos travel to Lucas Oil Stadium to play the Indianapolis Colts.

The Raiders were in trouble throughout this game and on top of that they lost Terrelle Pryor to a head injury he suffered when Bronco linebacker Wesley Woodyard connected with his head on a hard helmet to helmet hit late in the fourth quarter.

Manning and the Broncos drew first blood in the scoring department, as they went on a 10-play 55 yard drive that culminated in a Manning 2 yard touchdown pass to receiver Eric Decker who caught the pass in the back of the end zone to give the Broncos an eventual 7-0 lead with 10:32 left in the first quarter.  Decker is having some kind of September, as he has 19 catches for 252 yards and 1 score, his reality TV show Eric & Jessie: Game On premieres in five days on the E! channel, and he embarrassed the Raiders secondary last night to the tune of 8 catches for 133 yards and 1 score.

Meanwhile, the Broncos added to their lead with a Matt Prater 53 yard field goal with :53 seconds left in the first quarter to give the Broncos a 10-0 lead.

With around 12:40 left in the first half, rookie cornerback Kayvon Webster made one of the bigger statement plays for the Broncos last night. He dropped away from his coverage of Raiders receiver Denarius Moore and came down the hill so to speak, and popped Raider running back Rashad Jennings with such a strong force that the running back quickly left his feet and flew backwards for just a 1 yard gain. That tackle by Webster forced a 4th and 11 punt for Oakland.

Then with 7:32 left in the half, Manning fired his second touchdown pass of the night, this time to a slanting Wes Welker (7 catches for 84 yards and 1 score) who caught the pass near the back of the end zone to give Denver a commanding 17-0 lead.

Later, a huge play for Oakland was a Pryor (19 of 28 for 281 yards, 1 touchdown pass, and no thefts) touchdown pass to Moore. On the play Moore (6 catches for 124 yards and 1 score) shuffled past cornerback Dominique Rodgers-Cromartie and then the receiver slanted to his left and caught Pryor’s pass near the middle of the field. He was then aided by the fact that Rodgers-Cromartie and deep covering safety Duke Ihenacho ran into each other and fell down almost simultaneously, which gave Moore a chance to speed down the right side for a 73 yard score. No it was 17-7 with 6:11 left in the half.

Denver answered right back with a steady but fast scoring drive aided by Manning’s 61 yard pass to Decker who advanced the all all the way to the OAK 19 yard line. That play led to Manning’s 12th touchdown pass of the season (that touchdown total currently leads the entire NFL) to tight end Julius Thomas who traversed down the left sideline to the end zone for an eventual 24-7 Denver lead with less than 4 minutes left in the half.

Armed with a 30-7 lead in the third quarter, the Broncos saw a promising drive die with Oakland defensive end Lamarr Houston beating Bronco left tackle Chris Clark around the left side and sacking then forcing Manning to fumble. Manning’s fumble was recovered by Raider end Jason Hunter who hurried 15 yards forward to the OAK 30. That play led to a Pryor 28 yard completion to receiver Brice Butler who took the ball down the left sideline and out of bounds at the DEN 16. Later in the drive, running back Darren McFadden took the hand off from Pryor then ran to his right and threw a 16 yard touchdown pass to fullback Marcel Reece with Webster trailing him and never turning around to see the ball coming towards Reece. The score was 30-14 Denver.

Running back Ronnie Hillman (9 carries for 66 yards and 1 score) dominated Denver’s last scoring drive as he carried 3 times for 33 yards and 1 score. That one score was a 1 yard touchdown run in which he tried with all his might to get into the zone. With still 11:21 left in the game the Broncos had an insurmountable 37-14 lead.

McFaddden scored the last points of the game for both teams as he ran down the right side and then dove for the end zone pylon to make the score 37-21 with 1:11 left in the contest.