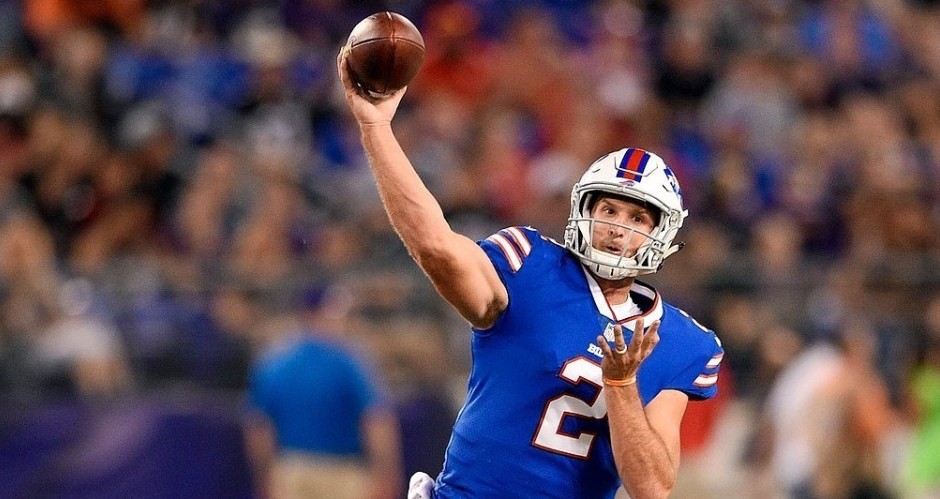 Week one – a clean slate for everyone, including Nathan Peterman. Peterman has gotten the nod as Buffalo’s week one starting quarterback and will lead the Bills in to M&T Stadium to take on the Baltimore Ravens. Both AFC teams finished the 2017 regular season at 9-7, but due to a tiebreaker that relied on strength of schedule, only Buffalo made the playoffs. Had it not been for the Ravens catastrophic meltdown in the week 17 loss to the Bengals last season, it would have been the Ravens going to the playoffs with a record of 10-6.  The Ravens won’t soon forget the viral videos of the Bills celebrating down in Miami after watching Tyler Boyd end Baltimore’s season on 49-yard touchdown with just 44 seconds left in the game. To salt the wound, less than two weeks ago Bills fans gave Bengals quarterback, Andy Dalton, a standing ovation in Buffalo to thank him for the playoff bid. Make no mistake about it, the Ravens are kicking off the season looking for revenge.

Peterman will head to Baltimore trying to prove the Bills playoff bid – and his preseason statistics – were anything but a fluke. Peterman finished the preseason going 33/41 for 431 yards, 3 touchdowns, 1 interception, and a QB rating of 124.7. He will have to prove that point against a top 10 pass defense that is returning all of their starters from a year ago. Baltimore only gave up 18 passing touchdowns last season and led the NFL in interceptions with 22.  They were one of only five teams to have more interceptions than touchdowns.

Peterman’s preseason might have went well, but his room for error is minimal. Rookie quarterback, Josh Allen, who the Bills traded up for and selected seventh overall in the 2018 NFL Draft, is waiting in the wings. Whoever ends up being under center for the long haul will need a lot more help from the receiving core. Buffalo finished second to last in passing yards last season. Former quarterback, Tyrod Taylor, certainly wasn’t a risk taker, but much of the teams passing woes can be contributed to Bills receivers failing to get open. Buffalo’s leading receiver in 2017 was tight end, Charles Clay, who finished the season with only 558 yards. Their second leading receiver wasn’t a receiver either – it was running back, LeSean McCoy. In fact, you would have to combine Buffalo’s top three “receivers” just to surpass what Chargers receiver, Keenan Allen, did all on his own last season (1,393 yards). Buffalo traded for receiver, Kelvin Benjamin, midway through last season and they will need him to come on in a big way. If anyone wants to contribute, it’s certainly Kelvin – he is in a contract year.

Baltimore may have revamped their entire receiving core with the additions of Michael Crabtree, John Brown, and Willie Snead IV, but the keys to winning for both teams will be within the tackles. Last season Buffalo finished 29th in rush yards allowed and gave up more rushing touchdowns than anyone in the league (22). The Bills added defensive tackle Star Lotulelei in free agency, but until they prove they can stop the run teams will continue to try and pound the ball to control the clock. The Ravens can expect the same. With questions at quarterback, Buffalo will continue to lean on LeSean McCoy. Shady finished the 2017 season as one of only nine running backs with over 1,000 yards. His 1,138 yards were good enough for fourth in in the league.

Baltimore heads in to Sunday favored by 7.5 points. Kickoff is scheduled for 1pm Eastern Time on Sunday, September 9th, 2018.