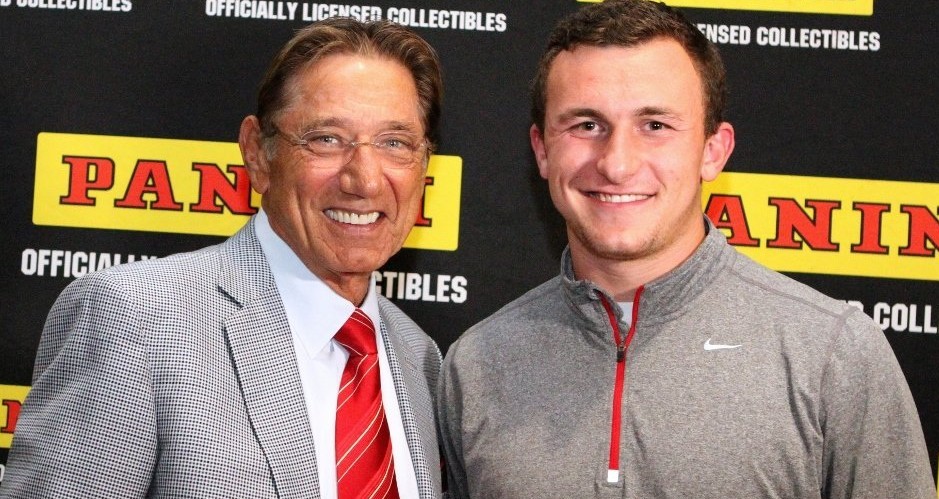 On the surface a trading card is simply a thick piece of card stock colorfully printed with an image of an athlete, a brief bio and some stats. Dig a little deeper and you’ll find that sometimes trading cards are magical. But how does the magic get there?

I tried to get some insight from my son who is a card collector. It’s one of the few “old school” activities (doesn’t involve a screen) he enjoys other than standing on a pitcher’s mound or throwing a ball in from center field. Mack purchased his first pack of cards in Cooperstown, New York when we were visiting the Baseball Hall of Fame. What is it that draws him to sort, organize and look at these cards for hours?

No surprise he wasn’t up for being interviewed by his mom so I had to go elsewhere. Fortunately, I had another option, Jason Howarth Vice President of Marketing for Panini America a.k.a @Sportsmktgguy. He and Tracy Hackler @TracyHackler are two members of the Panini team who embody the philosophy first espoused by Albert Einstein “Creativity is intelligence having fun.”

Instead of just thinking outside of the box, Panini jumped out of the box and stomped on it. At one time they were the new kid on the block in the trading card space but today Panini is firmly established as an industry leader and a memory maker for kids, serious collectors and the athletes they feature on their cards. “It’s surreal. I can’t wait to give one to my mom and dad,” New York Giants Odell Beckham Jr. on seeing his Panini rookie card.

How did they do it? Howarth says it’s because Panini is committed to integrating the players into their marketing platforms, team partnerships and social media. That translates to a personal relationship and engagement for the card collectors with the athletes.

Why Panini? For the past few years I have been in the hot sun at the Los Angeles Memorial Coliseum or at other locations as part of the NFLPA Rookie Premiere where the top rookies make their transition from college to the pros. One of the rights of passage for the NFL rookies is the signing of their newly minted trading cards. We’re not just talking about one or two – I mean thousands of them.

Writing the same thing numerous times as you can imagine is never a fun task but doing that at one of the most exciting times in your career, well that can be torturous. Somehow though Panini manages to put the magic in the cards for players and some lucky fans. Players have been known to hijack twitter, tweet messages and post a few selfies.

Howarth says their overarching mission is to create memories and, in working with athletes, make them real to fans. Panini takes some of its plays from their athletes like Kobe Bryant, Kevin Durant, Blake Griffin, Kyrie Irving, Andrew Luck and Johnny Manziel who take over a game and transcend sports in their own way.

“We had Denard Robinson at the Pop Warner Super Bowl last year and he was talking to players giving pre-game pep talks,” shared Howarth. “Seeing his eyes light up talking to kids is one of my favorite memories.

As his two-hour commitment was ending Robinson was hesitant walking to the car to drive from Orlando back to Jacksonville. I asked him what was wrong and he said, ‘I really enjoy this can I stay longer?’ He stayed for 8 hours.

That speaks a lot to him as a person and goes beyond being just a player.”

Read more on Denard Robinson, his shoelaces and his impact with the Jaguars

Another favorite memory is with Kobe Bryant when Panini was shooting their World Cup “Who Do You Collect” spot. They had been planning it for almost a year and it included Andrew Luck both athletes are passionate fans of the game.

“Watching the two of them interact off camera talking about commitment to their games and what it takes to win championships was really cool to hear,” says Howarth.

“As Kobe was heading to the dressing room for a basketball gear change. We got on the elevator and a family got on as well. As the doors were closing, the parent realized it’s Kobe. They go silent and their little girl is just standing there with no idea who this person is. Kobe smiles at her and starts talking to her telling her how beautiful she is and asking her what she likes to do and play.”

The most important thing is to try and inspire people so that they can be great in whatever they want to do.

The biggest athlete on the planet and I got a glimpse of him being just like us. It’s just one of those moments that no one ever sees. When I think of Kobe, that moment pops into my head.”

This summer while I was at the Pro Football Hall of Fame in Canton, Ohio for Enshrinement Weekend, myself and Edie B went on a road trip to Cleveland to attend the Panini VIP party at First Energy Stadium during the National Sports Collectors Convention. Edie was a good sport about going but I knew she didn’t have high expectations for the fun factor. All that changed after we cleared security and entered the party.

First up was Joe Namath, Edie’s favorite NFL player of all time. He wasn’t in a corner surrounded by an entourage but was engaging with everyone in the room. Joe and Edie were too busy laughing to look at the camera at the same time for me to take a picture. They were talking about someone else Joe Namath knew named Edie (apparently there’s more than one Edie).

Looking around, the room was filled with some of the best athletes in the world. Johnny Manziel, Kyrie Irving, Dr. J, Dominique Wilkins, Trey Burke, Jose Canseco, and Tom Glavine and Joe Namath to name a few. All of them were talking freely with the guests, having fun and creating memories.

On the way home Edie said, “How cool that was. The players completely checked any egos at the door. The interactions were real and genuine.”

For most collectors, it’s about more than the cards. It’s also about the memories of the players themselves. Panini has mastered the art of weaving the cards and the memories together, creating the magic that endures a lifetime.