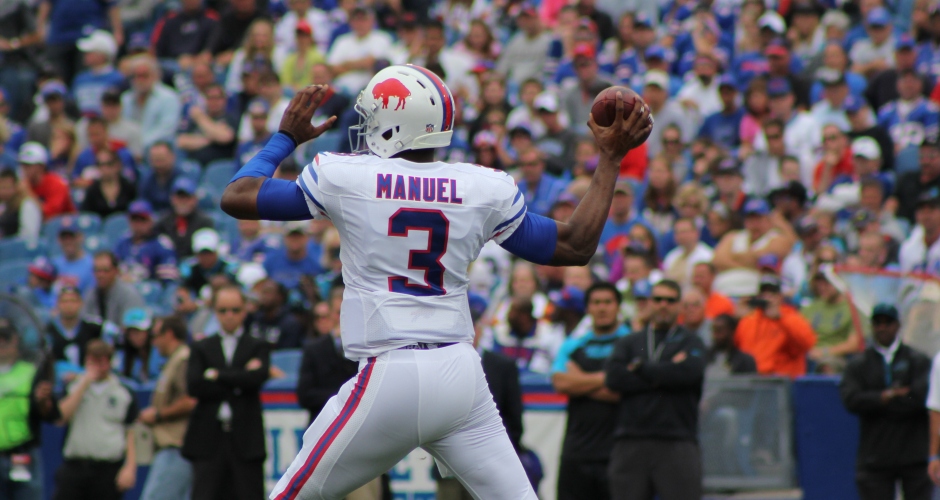 No one gave the Buffalo Bills much of a chance heading into their season opener on the road against the Chicago Bears on Sunday.

It turns out, they didn’t care much what other people thought as the Bills went into Soldier Field and left with a 23-20 overtime victory.

Dan Carpenter hit the game winning 27-yard field goal with 9:51 left to play in overtime. It was set up by a rumbling run by Fred Jackson, who took a 2nd and 5 handoff from the shotgun formation to the left side of the field for a 38 yard gain to the Bears 1-yard line.

It was a very close, back and forth affair between two talented football teams.

The Bears got on the board first early in the 1st quarter, as they only took 4 plays to drive down the field 66 yards. The drive ended in a 12-yard pass from Jay Cutler to tight end Martellus Bennett. Buffalo countered with a 9 play, 71 yard drive of their own on their next possession to tie the game at 7. The touchdown occurred on an EJ Manuel 2 yard keeper.

The Bills would take the lead early in the 2nd quarter, off the boot of Carpenter who connected on a 50-yard field goal to put his team ahead 10-7. On the Bears next possession, Cutler would try to force a seam pass over the middle to Bennett but Bills corner Corey Graham made a great read on the ball and stepped in front for an easy interception. On the very next play EJ Manuel ran a play action pass and hit running back CJ Spiller (who beat everyone to the flats) for a 7 yard score. It was 17-7 Bills heading into the half.

The Bears would tie the game by the end of the 3rd quarter.

A Brandon Marshall 11 yard score from Cutler (Marshall won a beautiful jump ball over Bills corner Leodis McKelvin) and a 41 yard field goal by Bears kicker Robbie Gould made it 17-17 heading into the fourth.

Both teams had their chances in the final quarter, but neither could capitalize. The Bills would convert another possession into a field goal with just 4:07 left in the game. The defense couldn’t hold the lead though as the Bears were able to get a field goal of their own on the next drive to tie the game with just 35 seconds left to play.

After the Bills forced the Bears to punt on their first overtime possession, the offense showed that they wanted this one. Big plays by Spiller and wide out Mike Williams helped lead the Bills down the field. Jackson’s run who took them into chip shot field goal range, and Carpenter’s kick would end the 7 play, 72 yard drive along with the Bears hopes of winning this.

Buffalo gets out of Chicago with the 23-20 victory.

1. EJ Manuel showed a lot of poise in this one as he finished the day 16 for 22 for 173 yards and one passing and rushing touchdown. He would throw an ill-advised interception trying to make a play in the 3rd quarter. It almost cost the Bills, as the Bears scored the Marshall touchdown on the ensuing drive and it could have turned into the big turning point for the day. Manuel would shake it off though and make plays throughout the fourth and overtime to put his team in a position to win this game. A big thing from Manuel is he was giving his receivers a chance to go up and make plays for him. Sure a few of the throws were a little off, but he allowed both Robert Woods and Mike Williams to go up and make plays when they were in one-on-one coverage. This aggressiveness from Manuel will make the Bills a dangerous unit. With all the weapons at the skill positions, Manuel needs to be able to make plays down the field and he did in this one. He looked like a comfortable quarterback and other than the one pick, he didn’t really make many mistakes in this one. A very good game by the quarterback gives the Bills so much hope for this season.

2. What a game by Bills corner Corey Graham. Graham had to step up and start after Stephon Gilmore was a late inactive before the game. Graham rose to the challenge and made a ton of plays all over the field. He had the interception we touched on earlier and really made life as difficult as possible for Marshall when he was in coverage with him. Great first game for the Bills native!

3. The Bills could really use a tight end to complete their offense. Scott Chandler dropped his only target, which was on the first series of the game for the Bills. It would have been a first down had he been able to hold on. Chandler also took a bad personal foul penalty but slightly made up for it when he really sealed the corner as a lead blocker for Manuel on his touchdown run. Chandler is serviceable and is a big target for Manuel; I just wish they had a little bit more at this position for opposing defenses to really worry about. One target all game for your starting tight end just isn’t cutting it.

4. The jury is still out on how much the Bills run defense has improved this year. New comer Brandon Spikes made a lot of plays near the line of scrimmage but Bears running back Matt Forte still average over 4.8 yards a carry. He finished the day rushing for 82 yards on 17 carries. Forte was all over the place in this game though. Coming into it the Bills knew he was going to get his touches and he did. Forte also caught 8 passes for 87 yards to go along with his totals on the ground. The only positive is the Bills were at least able to keep him out of the end zone. Forte is a stud and anyone who was able to pick him in fantasy football this year will be reaping the benefits.

5. I’m going to give the Bills secondary a pass on this one. They were without their starting cornerback and had to go up against one of the best passing attacks in all of football. Hard to tell how far they have come along when they are going up against monsters in Marshall and Alshon Jeffery. The two combined for 13 receptions for 142 yards and a touchdown.

The Pro Bowl defensive tackle had every big man’s dream as he dropped into coverage and intercepted a pass from Cutler in the fourth quarter. The interception stopped a promising Bears drive in its tracks and turned into a Carpenter field goal for the offense. It was the first interception of Williams’s nine year career.

427 total yards and 29 first downs for the Bears offense

Again, I’m going to give this stat more to the match up than the talent on the field. The defense gave up a ton of yards but took advantage of their opportunities with three turnovers.

With an interception and multiple pass break ups, Graham was arguably the best Bills defender on the field in this one. Nice to see the Buffalo native step up.

On Tap for Next Week

The Bills will head back home to Buffalo to take on the division rival Miami Dolphins for their home opener at Ralph Wilson Stadium. Kickoff is at 1:00 PM (eastern). Both teams are entering the game at 1-0.

It was a great win for a young Bills team. The Chicago Bears were thought to be Super Bowl hopefuls and the Bills came in and stole one from them. It still is very early in the season so I want to keep everyone in check, but how could you not be happy as a fan after a win like this? This is one the Bills needed to win to start taking that next step into becoming a winning football team. They delivered and find themselves tied for first in the AFC East.