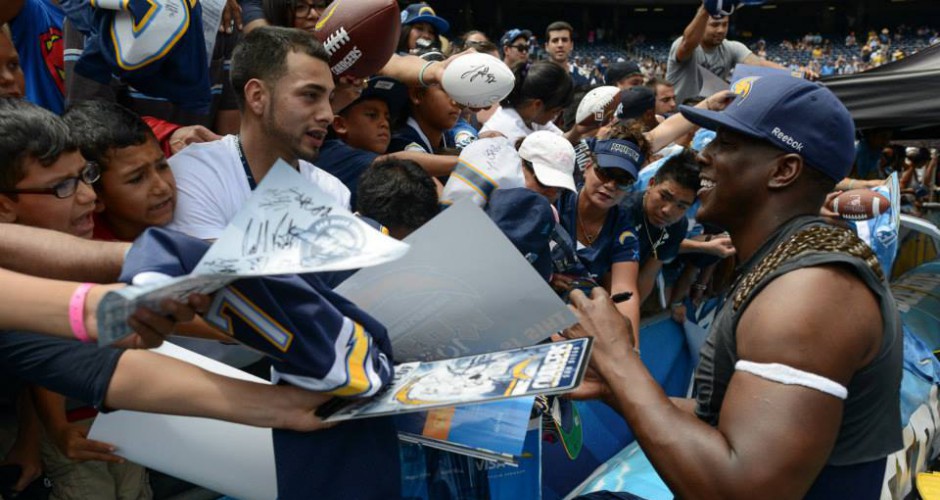 Which two Chargers players jerseys are the hottest sellers leading into the 2013 season?

This offseason has been exciting for middle linebacker Manti Te’o, fans have truly taken a liking to him and his work ethic at Chargers Park. Manti (second-round pick out of Notre Dame-No. 38 overall) has actually had the top-selling jersey among all rookies based on sales from April 1 through June 30.

Let’s rewind about a decade. Antonio Gates came to Chargers camp in 2003 as a power forward, yes, that’s not even a position in football. He had his share of doubters, but now with 8 Pro Bowl selections, numerous records, and a resume fit for the Hall of Fame, those doubters are nowhere in sight. If Te’o can string together strong campaigns, history will repeat itself and Gates tells us he has the ability to do it.

“To me, what’s most impressive about him (Manti Te’o) is his ability to want to learn and get better. Ultimately when you come in as a rookie, you never know what to expect as a rookie, (and) as a draft pick. He’s been willing to get better, willing to listen, he’s paying attention to details and that’s the start to being a great player in this league.”

Manti Te’o polished off a solid Senior year at the University of Notre Dame as the heart and soul of the Fighting Irish defense, but teams passed on him in the 2013 NFL Draft because they didn’t want to deal with the hype. The San Diego Chargers chose talent and intangibles over the controversial issues when they traded up to draft Te’o, and since day one he has made it clear there’s no where he’d rather be. Today, he addresses the city that embraced him and continues to support him with a short but sincere statement.

Pro Player Insiders: Is the new offensive system where you guys want it to be?

Antonio Gates: Yeah, it’s getting there. We’ve still got some work, some improvements to be made, but at the end of the day we’re doing everything we can every single day to be the best offense that we can be.

PPI: What can you pinpoint as something that needs improvement?

PPI: As being a leader for this team, what do you tell these guys?

Antonio Gates: It’s about focus for us an offense. It’s about you believing that your teammates are going to be in the right position at the right time. Most importantly, it’s about trust, we trust one another and since I’ve been here that’s been a signature of our offense. Taking care of the football. That formula, to me, is something that will continue to have success in this league and that’s what we preach and that’s what we talk about.

PPI: Speaking of being a leader, Antonio, have you gotten the rookies to do anything funny, or fun this training camp?

Antonio Gates: No it’s been different this year, you know. Our main focus has been on winning football games, more so than all extra-curricular activities outside of football. But at the same time, when the season starts and the rookies are here, they’re gonna know they’re rookies. It’s one of those things where you give and take. We’re not doing nothing crazy. We’re not cutting off hair and making them cut their beard or mustache but at the same time we’re teaching them the sound fundamentals about football and how to carry yourself in this community. How we are viewed as Chargers, how we’re viewed as people and more importantly how you treat people outside of, you know, this football field and how you treat people in this community. So, these group of guys that we have now is unbelievable. Can’t say enough about em. They’re willing to work, they’re willing to learn and I think that’s a start.

PPI: Is there any one play that stood out to you this week from a young guy? Or just one young guy in particular?

Antonio Gates: Yeah, I think collectively what we’ve done from an offensive standpoint, seeing guys be able to comprehend so much information. It’s really hard in this league and seeing young guys being able to do that. Young rookies that we have, young tackle that we have he’s just been phenomenal learning and picking up protections and he’s still growing at this time and he’s gonna do nothing but get better.

Things look to be promising this season under the San Diego sun. With the pieces falling together on both sides of the football, the Chargers could make a push towards the AFC West title in 2013.

–Thanh Pham contributed to this story