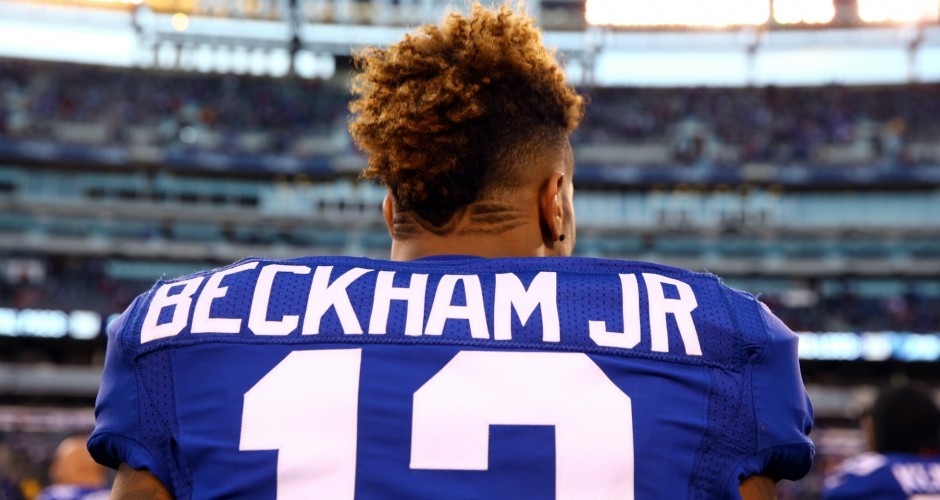 Pompous. Arrogant.  Selfish. Diva.  These are just a few of the adjectives that have been used to describe Odell Beckham Jr. since his arrival in the National Football League.  After the team’s 3-13 finish, New York Giants owner John Mara publicly stated that no one on the team is safe, not even OBJ himself, albeit the fact that number 13’s injury likely played a key role in the Giants losing 13 games.

“I can’t answer that one way or the other,” Mara said, when asked if he could see Beckham not being with the team next season. “I mean we’re certainly not shopping him, if that’s what you’re asking (laughs). But when you’re coming off a season where you’re 3-13 and played as poorly as we played, I wouldn’t say anyone’s untouchable.”

Mara may have gotten a good laugh from reporters, but Odell was surely anything but amused. It was no surprise that not long after Mara’s comments Ian Rapport was reporting that Beckham Jr. does not plan to set foot on a field, for any team, without a new contract.  If reports are accurate, it will take two first-round draft picks in addition to a new contract pushing close to $20 million annually.  That’s a steep price for a guy whose questionable “highlights” seem to only be airing on TMZ Sports as of late.  However, the real question should be, is he worth it?  Boats and hotel rooms aside, let’s evaluate.

Matthew Stafford ($27M/year), Kirk Cousins ($28M/year), Sam Bradford ($20M/year), Derek Carr ($25M/year), and Jimmy Garoppolo ($27.5M/year) all have two things in common: they all make $20 million or more a year and not one of them has ever won a playoff game.  Outside of Jimmy G, the other four all have losing records for their career!  Arizona just gave Bradford, a QB with a degenerative knee, $20 million (if healthy)!  Yes, yes, the “but they are quarterbacks” argument is heard loud and clear but if the guys making the big bucks can’t win more games than they lose, how is a guy like OBJ, who clearly adds wins to his team’s record, not worth $20 million a year?

Still not convinced? Let’s take a look at receivers alone.  Top three contracts: Antonio Brown ($17M/year), Mike Evans (16.5M/year), and DeAndre Hopkins ($16.2M/year).  Whether or not you like Odell Beckham Jr., you’d be crazy to deny that he isn’t at least part of the discussion when it comes to being the best receiver in the NFL.  That automatically starts the contract discussion off in the $16-$17 million per year range.  As we already know, the newest contract always outdoes the last one.  Couple that with the fact that Odell is only 25 years old (4 years younger than AB), and suddenly we’re not so far from $20 million a year.  Now the question is who would also be willing to give up two first round picks?  For this to make sense, it should be a team that could be considered a contender.

With the trade for Brandin Cooks, the Rams are out.  But what about the team that traded away Cooks?  The New England Patriots.  They’re always Super Bowl ready.  There are a ton of reasons why the Patriots would never make a move like that, but don’t sleep on the reasons why they might.  Half the time New England doesn’t even use first round picks.  Since 2012, they have only used three first round picks, two of which are no longer with the team (Chandler Jones, Dominique Easley). It doesn’t appear that losing draft picks has any effect on their Super Bowl stock.  Cooks was in the final year of his contract and will likely command $15+ million a year in the open market so the two parted ways.  Maybe the Patriots decided that if they were going to pay a receiver that kind of cheese, it would need to be a higher caliber player like Beckham.  With Danny Amendola headed to Miami, a 31 year old Julian Edelman returning from injury, and a Rob Gronkowski questioning retirement, OBJ could help the Pats continue on without skipping a beat.

Other than the Patriots, the only other sensible options would be the San Francisco 49ers or the Cleveland Browns. While at the moment they are sitting outside the “contender” category, the 49ers just bought the farm in Garoppolo and now they need to supply him with weapons.  Adding OBJ could certainly make them competitive in the NFC.  Make no mistake, the entire NFL see’s what the Rams are doing and if anyone is uneasy, it’s the other teams NFC West.  With how much potential is sitting in Los Angeles, San Francisco could very well feel like they need to make a big splash just to compete.  Cleveland could be an option for the simple fact that they have the draft picks.  While it would be crazy to offer up the first and fourth overall picks, the Browns could dangle one of their first round picks and the first pick of the second round as bait.  This would still allow the Browns to keep one of their top picks to select Saquon Barkley or a quarterback of their choice.  After a history of losing, the word contender and Browns doesn’t seem quite right but if an offense made up of Tyrod Taylor, Saquon Barkley, Odell Beckham Jr., Jarvis Landry, and Josh Gordon can’t compete, they never will.

While speculation is fun, the most likely outcome would have to be Odell staying put in NY, even if he doesn’t want to. He still has one year remaining on his contract, valued at about $8.5 million in 2018.  Without a suitable trade partner the Giants will be in no rush to extend Beckham.  After this season ends, the Giants can franchise tag him for up to two more years.  This year, the cost of franchise tagging a wide receiver is just under $16 million.  That amount shouldn’t go up much next year as many of the best receivers are already under contract for at least few more years.  Beckham could very well get his $20 million a year, but with the Giants holding all the cards, it might not be until 2020.

The only thing that is certain is this – Beckham is an amazing athlete. Even A.J. Green called OBJ a “once-in-a-lifetime, or once-in-a-generation talent.”  So whatever demeaning adjectives you decide to use when referring to Beckham Jr., just be sure to follow it up with superstar.