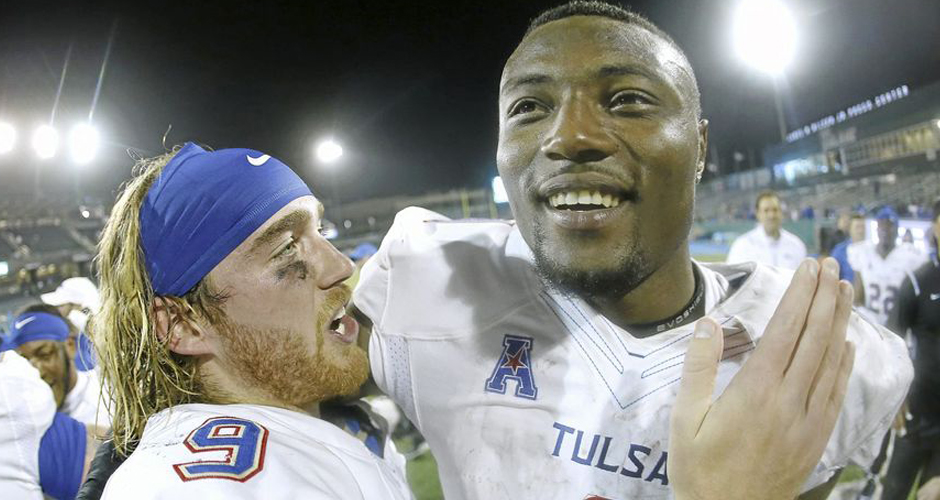 Keyarris Garrett, the standout player from the University of Tulsa, is poised to show the NFL he has what it takes to be one of the best wide receivers in the league. That’s something Keyarris has been quietly and consistently working toward throughout his college career. The result – his numbers and accolades are nothing shy of impressive.

The Tulsa Hurricane earned All-America honors from Sports Illustrated and Phil Steele and was named to the All-AAC First-Team in 2015. In his final season, Keyarris led the nation in receiving yards, posting seven 100+ yard games – including two with more than 200 yards each. He ended the season with 1,588-receiving yards and eight touchdowns.

For Keyarris, who hails from the State of Texas, football is a way of life. However, growing up his first love was basketball then in 10th grade Keyarris a.k.a Key found his football calling.

Out of high school Keyarris wasn’t as heavily recruited as some of his teammates. While he was happy for his friends he was disappointed but used that as motivation. “I [felt] like I was the best wide receiver and I’ll show everybody that I can play.”

What makes him one of the best? Outside of his determination, Keyarris says his size, speed and his numbers make him a standout. Scouts view him as a very dominant player and say if the ball goes Keyarris’ way he’s going to catch it.

Outside of football, family has always been an important part of his life. His grandfather, who passed away earlier this year, helped guide and advise him. Keyarris also enjoys the love of his amazing three-year old daughter Ayonna. “She means everything to me. She’s a huge impact in my life. I never thought someone could make such an impact on my life. I want her to have everything that I didn’t have growing up.”

Keyarris laughs as he shares that Ayonna’s favorite movie is Frozen. (He wouldn’t sing the theme song.) “She loves that movie, so we watch it all the time. Just to see the smile on her face, that’s the best thing.”

His favorite quote is from Muhammad Ali“I hated every minute of training, but I said, ‘Don’t quit. Suffer now and live the rest of your life as a champion.’”

It’s no surprise that on draft day he’ll be in Tulsa wearing a pair of his favorite Jordan’s and watching the draft with his family. When his named is called, Keyarris will be ready to take the next steps toward becoming a Super Bowl champion.